Coronavirus was found in a 64-year-old woman’s EYE two MONTHS after she recovered,


Coronavirus was found in a 64-year–old woman’s eye two months after she has recovered, a new report reveals.

In a case study, researchers detail a 64-year-old woman who was diagnosed with the virus in early February and tested negative after an 18-day hospital stay.

However, not long after she was discharged, she developed pain in both of her eyes, die to a buildup of fluid.

After undergoing surgery in March, she had to have an additional operation in April, during which tissue samples of the eye showed evidence of viral proteins, accordin to the team from the General Hospital of the Central Theater Command, in Wuhan, China.

It comes on the heels of Vice President Mike Pence appearing to have a pink and watery eye during Wednesday night’s vice-presidential debate, which led many to fear he is infected with COVID-19. 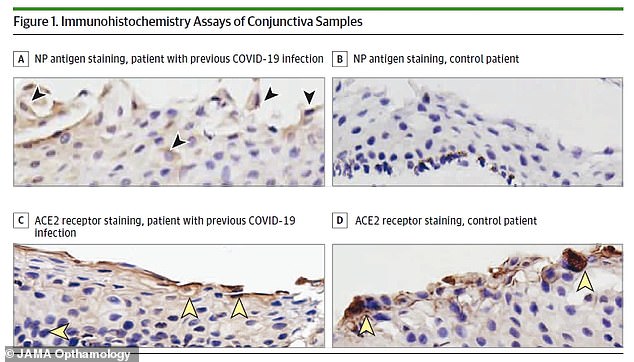 A woman who recovered from coronavirus in February was discovered in March to have an eye condition that caused a build-up of fluid. Pictured: Coronavirus proteins found in her eye (top left and bottom left) but not in a control patient with same condition (top right and bottom right) 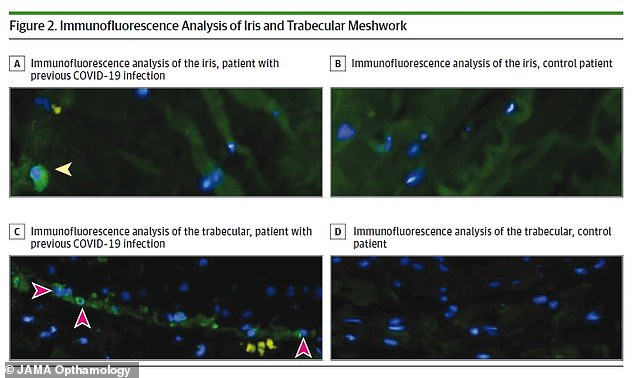 The woman underwent surgery in mid-March and again in April, where tissue samples revealed viral proteins in her eye (top left and bottom left) but not in a control patient with the same eye condition (top right and bottom right)

Previous research has recently found that the eyes produce ACE-2 receptors, which the virus latches onto to enter and infect human cells, making the organs a prime target.

Coronavirus has not only been found on the surface of the eyes, but also within tears, which would transfer the pathogen.

This may explain why up to 12 percent of patients with COVID-19 have so-called ‘ocular manifestations,’ such as redness and swelling.

For the new case study, published in JAMA Ophthalmology, the team looked at a patient previously infected with COVID-19.

The 64-year-old had had a dry cough for five days and diarrhea for nine days before going to the hospital on January 31, 2020. 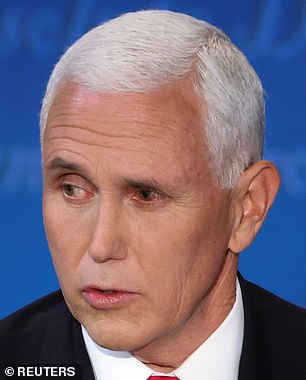 It comes as Vice President Mike Pence appeared at the debate on Wednesday (above) with a pink and watery eye, a known symptom of COVID-19

Clinicians found she had a fever of 100F (37.8C) and chest CT scans found patterns of ‘ground glass opacities,’ or haziness in the lungs.

After running a nasal swab test, she was diagnosed with the coronavirus, but had no serious respiratory or eye symptoms during her hospital stay.

By day 18, her symptoms has cleared and she received two negative tests, first on February 18 and the second on February 20.

[On February 28, she began experiencing persistent left eye pain and visual acuity loss. Three days later, the same symptoms developed in her right eye. She was admitted to the ophthalmology clinic on March 8.]

Doctors discovered she was experiencing an acute glaucoma attack, which occurs when fluid cannot properly drain, causing eye pressure to rise every quickly.

The eye pressure was unable to be lowered with medication so doctors decided she needed to have surgery, which was performed on March 14 for the left eye and on March 15 for the right eye.

However, she had to have surgery again on April 10 due to uncontrollable pressure in her right eye.

Researchers obtained blood and tissue samples from the patient during surgery as well as from another patient who had glaucoma but not COVID-19 to compare. 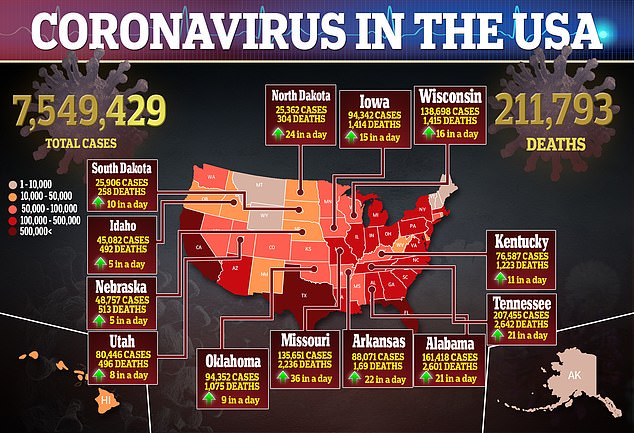 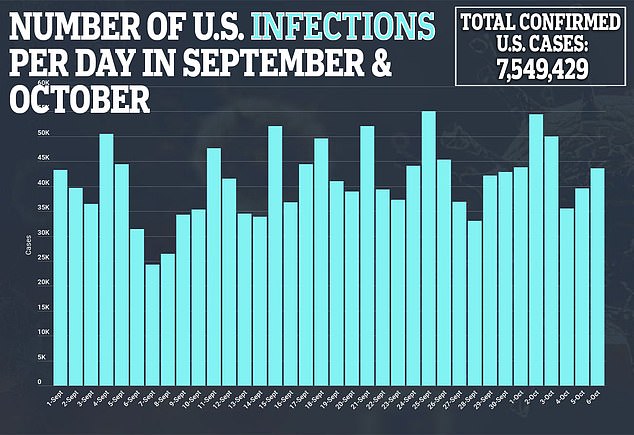 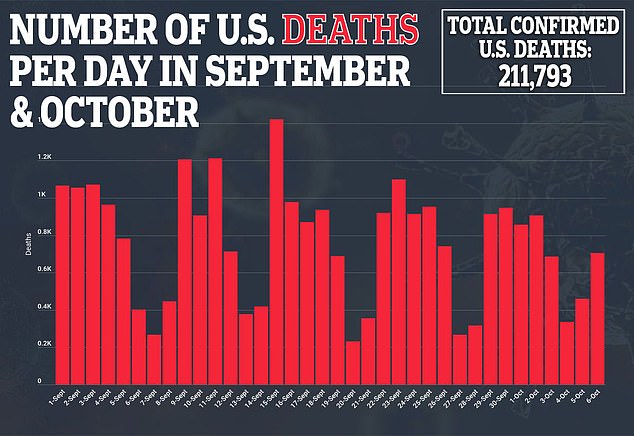 Results showed found antigens, or viral proteins, on the iris and on the conjunctiva, the mucous membrane that covers the front of the eye.

ACE2 receptor proteins were also found on the conjunctiva, two months after the woman had tested positive.

‘Based on these results, the eye is also one of the target organs for the viral infection in addition to the lungs,’ the authors wrote.

It comes as Pence’s left eye, which appeared red and swollen during Wednesday’s debate, drew a great deal of speculation.

Because pink eye is a rare, but known, symptom of COVID-19, many took to social media to ponder whether or not Pence had the virus.

Daniel Volland, a optometrist based in Seattle, tweeted that he believed Pence had a broken blood vessel, not an infection.