Coronavirus was found in Italian boy, four, in November 2019

A four-year-old boy in Italy was infected with coronavirus as early as November 2019, it is believed, in the latest piece of evidence that the disease was spreading around the world well before China acknowledged the outbreak.

The child, who lived near Milan and had not been travelling abroad, came down with respiratory symptoms on November 30 last year and was taken to a hospital’s emergency wing.

On December 5, 2019, a swab was taken from his throat, and that specimen has since tested positive for the virus that causes Covid-19.

But the virus went undetected in Italy until late January, only weeks before the contagion spiralled into Europe’s first major outbreak. 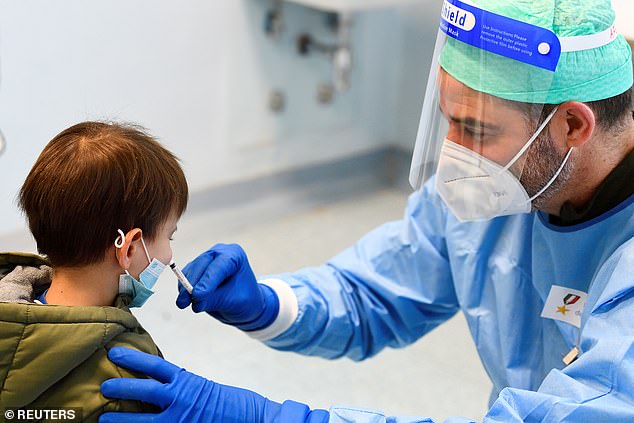 A four-year-old boy in Italy was infected with coronavirus as early as November 2019, it is believed, in another sign the virus was spreading well before China admitted it (file photo)

The latest discovery comes three weeks after a study by Italy’s National Cancer Institute which suggested the virus was spreading as early as September 2019.

Researchers found that dozens of volunteers involved in a trial from September until March had developed antibodies against Covid-19 well before February.

Another test found that at least four people already had antibodies by the first week of October, suggesting they might have picked up the virus in September.

The new study suggests that a four-year-old boy who developed a cough on November 21 may also have been infected.

Nine days after first falling ill, the boy was ‘was taken to the emergency department with respiratory symptoms and vomiting’, the study says.

On December 1, he developed a measles-like rash, and it was assumed at the time that measles were the cause of his illness.

This meant that the swab was ‘not optimal’ for detecting Covid-19 because it was taken from the boy’s throat rather than his nose.

However, the sample was ‘confirmed as positive by repeated amplification and sequencing’, the scientists said.

Writing in the Journal of Emerging Infectious Diseases, researchers say their findings were ‘in agreement with other evidence of early Covid-19 spread in Europe’.

The study said that a ‘long-term, unrecognised spread’ of the virus might help explain why the outbreak was so devastating to Italy in February and March. 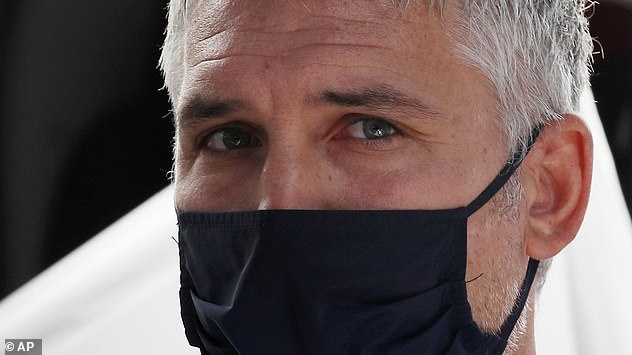 Mattia Maestri was Italy’s first known case of domestic transmission of coronavirus. He was diagnosed on February 21, and had not been to China or been in contact with a known case

Other studies have suggested that the virus was already present in France, Brazil and the United States before the end of 2019.

In May, French scientists said they had found evidence that a man was infected as early as December 27, having thought he had the flu.

The 42-year-old had no known links to China, suggesting that ‘the disease was already spreading among the French population’, researchers said.

However, it was not until December 31 that the WHO’s China office was informed of a mystery pneumonia which had sickened 44 people in Wuhan.

On January 5, the WHO was still saying that there was ‘no evidence of significant human-to-human transmission’ of the virus.

China has always denied allegations of a cover-up, reacting angrily to calls for an international investigation into the origins of the virus, but there have been persistent doubts about the accuracy of the figures it releases.

Numerous reports have detailed how China withheld key details about the virus in its early stages, including from the WHO which has praised China in public.

A young doctor, Li Wenliang, was reprimanded by police after trying to raise the alarm about the disease – and later died of it. 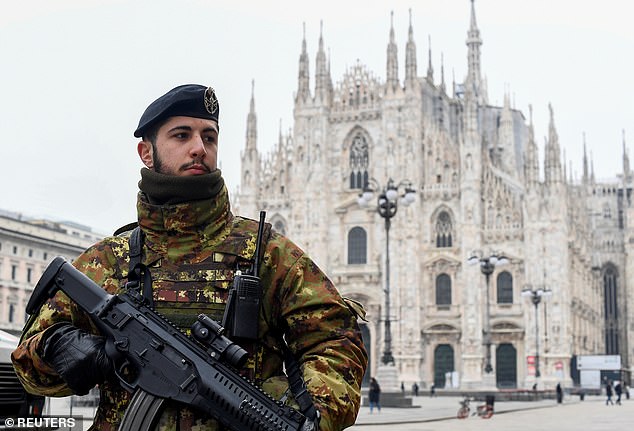 The findings suggest that the virus was spreading in Italy months before Europe’s first major outbreak began, forcing a national lockdown (pictured, a soldier stands guard in Milan)

The virus was first confirmed to have spread outside China in January, when a 61-year-old woman was found to be infected with it in Thailand.

In the following weeks, Italy became the first country in Europe to pile up hundreds of infections a day, followed by hundreds of deaths, mostly in the wealthy north.

Mattia Maestri, Italy’s first known case of domestic transmission of coronavirus, was diagnosed on February 21, and had not been to China or been in contact with a known case.

In March alone, there were more than 12,000 deaths in Italy, and the country had the world’s largest death toll for a time until the United States surpassed it in April.

Italy was the first Western nation to go into a full-scale lockdown, followed within a few weeks by most of Europe and the United States.

The drastic measures brought the infection rate under control by the summer, but Italy has again suffered badly during the second wave.

After daily deaths fell as low as five in the middle of August, they have once again surged into the hundreds, reaching a new record of 993 last Thursday.

Italy is also one of the few countries to have piled up more than a million infections in total, and its death toll now stands at more than 61,000.

YouTube to remove misleading videos about the outcome of the U.S. presidential election

Children who get depression are SIX times more likely to die by the age of 31, study finds