Former motorcycling champion Sean Emmett lied about the moments before his wife’s fatal fall from a Dubai hotel window, a coroner has found.

Surrey coroner Alison Hewitt said it was impossible to know what happened in the nine minutes before Abigail Elson plunged to her death but added Emmett’s account was ‘inconsistent’ and ‘unreliable’.

It means the circumstances of Abbie’s death will remain a mystery.

Emmett, now 50, has repeatedly claimed his new bride ‘flipped out’ of the window of their honeymoon suite in Jumeirah Creekside hotel while looking for the wedding ring she had just dropped.

He denied they had rowed before she died. Yet the two-week inquest heard he told Dubai police and consular staff immediately after Abbie died that she had thrown the ring shortly before her fall. 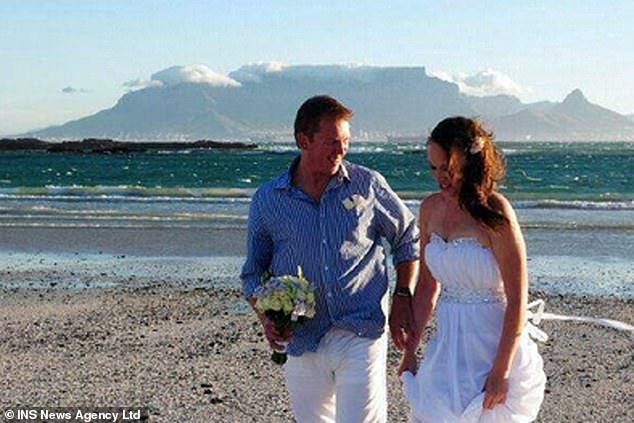 Mr Emmett been arrested by Surrey Police and the Dubai authorities on his return to the UK in December, but no charges were ever brought. Pictured, the couple together on their wedding day 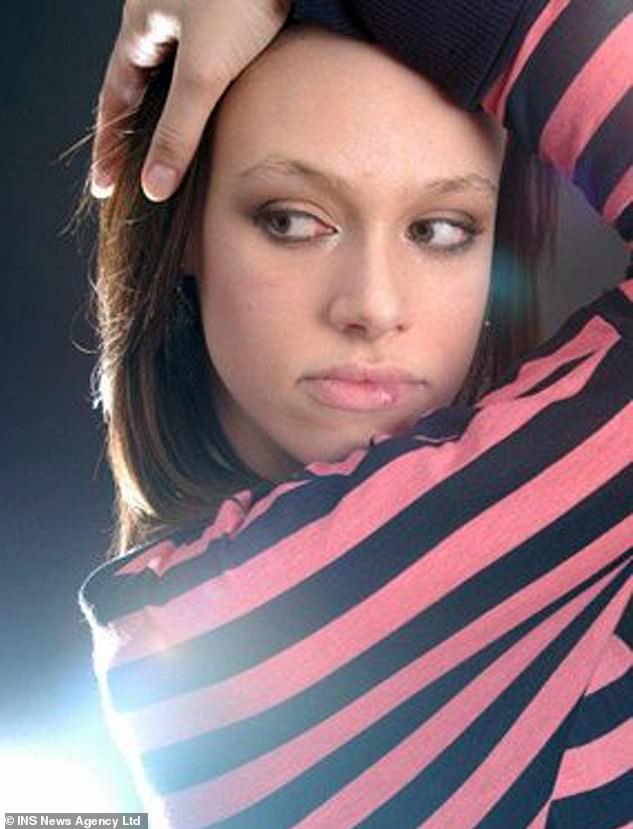 Abigail Elson, a 27-year-old vicar’s daughter, fell from a window at the Jumeirah Creekside Hotel on February 19, 2013 on her honeymoon 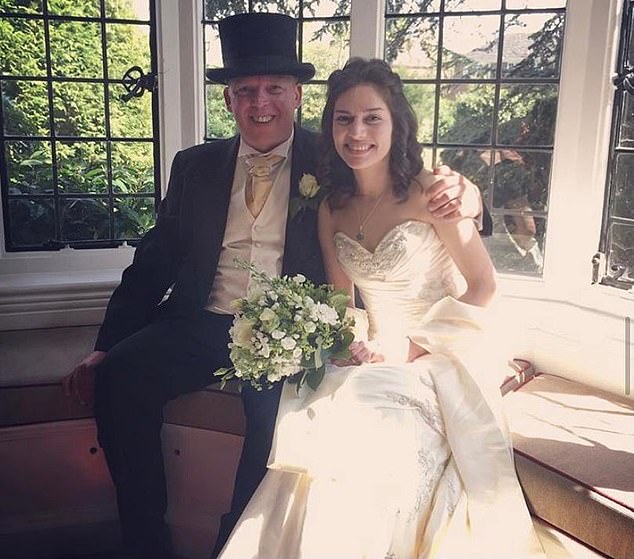 Emmett on his third wedding day to Lana Saoud in 2017

Just after she died in February 2013, he texted a friend to say she had been threatening to jump.

Recording an open verdict, Ms Hewitt said: ‘Taken as a whole, his account does not seem to me to be wholly credible.

‘He suggests she was increasingly upset and was putting herself in a precarious and dangerous position. He suggests he was calm and loving throughout, seeking to persuade her to come away from the window but that she lost her balance and fell out.’

During the five day inquest, the coroner heard:

:: How Mr Emmett once throttled his second wife Abigail until she nearly passed out two years before they married.

:: There were more than eight occasions – between January 2011 and February 2013 – of incidents of physical and verbal abuse against against Abigail reported to the police.

:: How Abigail was once pushed, punched, strangled, and even had her head shut in a car door by Mr Emmett. In one police report, she described him as ‘controlling and jealous.’

:: Prior to marrying Abigail, Mr Emmett was given a police caution for breaching a civil injunction which had been put in place between him and his first wife Louise, following allegations of domestic violence.

:: Details of two domestic incidents against Emmett’s current wife Lana Saoud, 29, – who accompanied him to Woking coroners court – which led to him being jailed.

Ms Hewitt said it was inexplicable why Emmett had not intervened physically to prevent Abbie, 27, who had a history of self-harm, reckless behaviour when drunk and depression, from going too close to the window.

‘He was certainly physically capable of doing so, and I consider he would have done so had he been calm and loving as he described,’ she said. ‘His account is not wholly true, although some aspects might be.’ 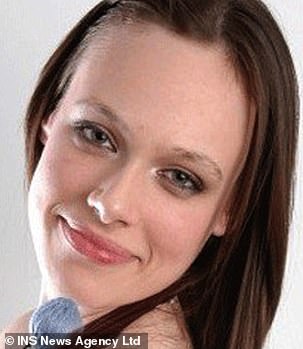 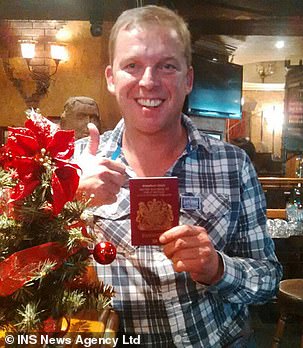 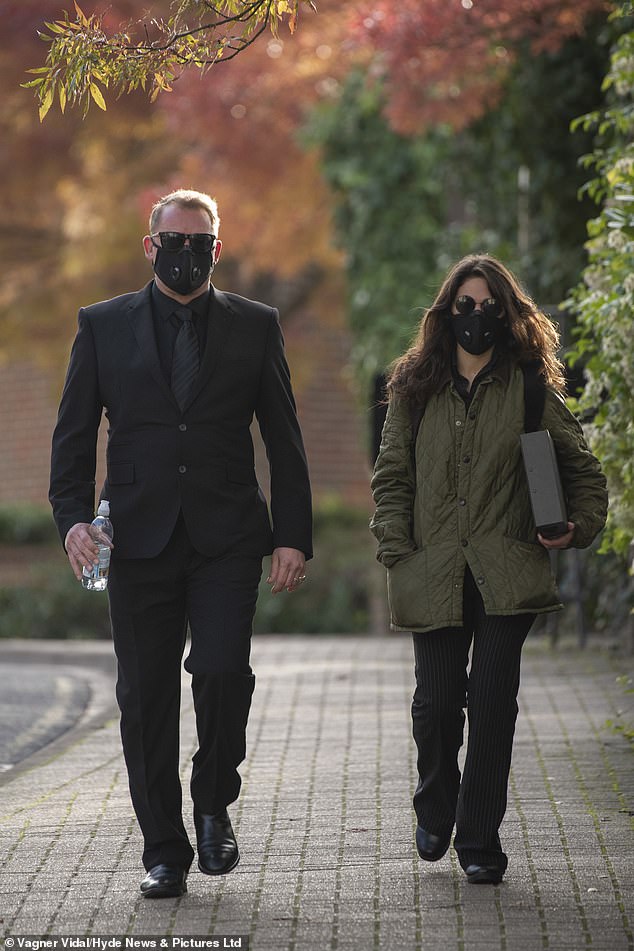 In giving evidence to the inquest, Emmett denied there was any physical altercation or tussle with Abbie just before she died, despite telling Dubai police in 2013 that he had tried to pull her away from the window.

Alexandra Felix, a lawyer representing Abbie’s family, said a leg print near the window and bruises on her thighs were consistent with her being assaulted before her fall.

Ms Hewitt said: ‘It does seem to me likely that there would have been some physical contact between the couple if Abigail was placing herself in a dangerous position as Mr Emmett suggests.

‘I do not consider that Mr Emmett has provided me with a full and truthful account in this regard.’

But the coroner ruled out a finding of unlawful killing because of insufficient evidence.

She acknowledged a long history of violence in the couple’s turbulent relationship and said Abbie had sought medical and police help on multiple occasions after Emmett assaulted her.

On one occasion, Abbie was hospitalised and housed in a women’s refuge but she withdrew her police statement before Emmett could be prosecuted.

But Ms Hewitt said: ‘In the absence of an account from Mr Emmett which I can accept is complete and true as to precisely what happened in the bedroom before Abigail fell, I am unable to make relevant findings as to the facts.

‘The fact violence was a feature of Abigail’s relationship with Mr Emmett is not in itself a basis for finding that there was violence at or about the time of Abigail’s fall, or that Mr Emmett was responsible for her fall.’ 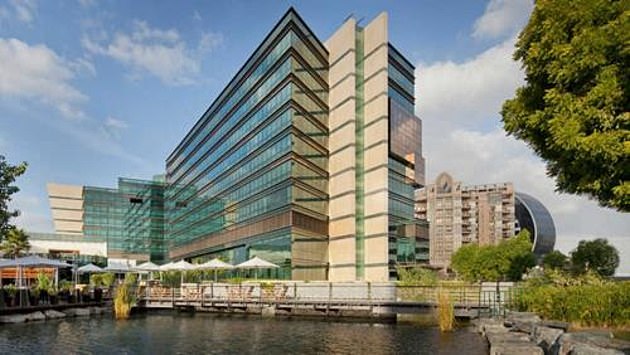 Ms Elson fell to her death from a fourth-storey window at the Jumeirah Creekside Hotel in Dubai (pictured). Mr Emmett said his wife had been reaching over their balcony in the honeymoon suite to try and retrieve her wedding ring when she fell 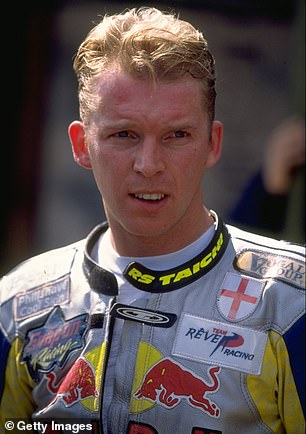 Mr Emmett, a former professional Grand Prix racer, was asked to give his account of the events leading up to Ms Elson’s death

Earlier, the inquest heard about the moment Ms Saoud – whom he met in Dubai shortly after Ms Elson’s death – called the police after he hit her in 2015.

Lana Saoud sat in court as Ms Felix read out a transcript from a 999 call she made following the incident in January 2015.

When asked about the incident Mr Emmett replied: ‘I decline to answer.’

Ms Hewitt also ruled out a finding of accidental death or suicide because it was impossible to understand Abbie’s state of mind without a reliable account from the only other person present in the room at the time.

The couple married in a beach wedding in Cape Town, South Africa, on February 6, 2013.

They travelled to Dubai on a two-night stopover on February 18 as part of their honeymoon but Abbie died during the first night of their stay.

The inquest heard the couple had been drinking heavily at their hotel resort for nearly 12 hours, downing three bottles of wine and at least 18 beers between them.

Emmett said when they returned to their hotel room, Abbie had been exuberant, dancing to loud music and jumping on the bed, but denied he had been annoyed by her behaviour.

He told the inquest she became tearful after accidentally dropping her wedding ring while smoking by a large window in their suite.

The coroner said she did not believe his claim that they had not been arguing when she lost the ring.

CCTV footage showed the couple leaving their room and searching hotel grounds 3ft away from the window, suggesting Abbie had thrown rather than dropped the ring.

Security cameras showed her returning to the room just after 1.30am, followed by Emmett 10 minutes later.

She said her finding of an open conclusion was ‘appropriate if the evidence fails to satisfy requisite proof’.

Emmett did not attend the hearing. Abbie’s parents, Carolyn and Christopher Elson, declined to comment.

Newlyweds had a stormy relationship which lead to prison time, inquest hears

The inquest heard details about Mr Emmett’s stormy relationship with Abigail and his convictions and cautions for domestic incidents involving her, his first wife Louise and his current wife Lana.

The coroner was told about more than eight reported occasions, which took place between January 2011 and February 2013, where allegations of physical abuse and verbal arguments were made during his relationship with Abigail.

The coroner was told how Mr Emmett was jailed for three months for hitting his third wife and breached a previous order relating to his first wife.

Ms Elson was reportedly pushed, punched, strangled, and even had her head shut in a car door by Mr Emmett. In one police report, she described him as ‘controlling and jealous.’

While giving evidence, Emmett was asked more than 30 times by Alexandra Felix, the lawyer for Abigail’s parents about incidents of domestic violence that took place between the couple.

On each occasion he responded: ‘I decline to answer.’

Ms Felix accused him of being ‘controlling’ and becoming ‘violent and obnoxious when drunk.’

The inquest was told that both frequently visited pubs and that much of their relationship revolved around drinking alcohol, which often resulted in physical and verbal abuse.

Emmett denied being violent or controlling but his legal team did not challenge details of his past.

Police told the hearing that in 2004, Emmett was given a caution for breaching a civil injunction which had been put in place between him and his first wife Louise, following allegations of domestic violence.

Emmett’s former neighbours at the home he shared with her in Surrey told MailOnline that police were frequently called to the property and it was widely known that they had a ‘difficult’ relationship.

Police also told the inquest that both Emmett and Abigail spent the night at a local police station following a fight at their home in Surrey and that she confided to her parents and a friend that he was ‘often violent towards her.’