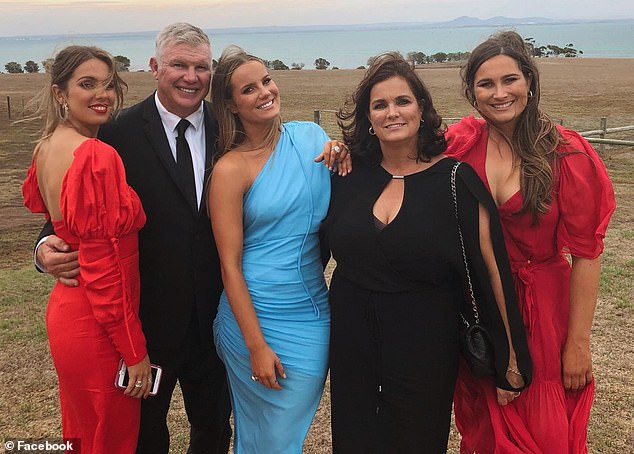 AFL legend Danny Frawley was battling crippling depression in the days before he took his own life, a coroner has found.

The St Kilda great turned media personality died when his car slammed into a tree near Ballarat, Victoria, one day after his 56th birthday on September 9, 2019.

His grieving widow Anita last year revealed the father-of-three suffered from Stage II chronic traumatic encephalopathy at the time of his death – a brain disease linked to head injuries.

A Coroners Court of Victoria report published on Tuesday said Frawley’s CTE diagnosis was potentially linked to the depression he suffered with for five years.

The footy veteran was regarded as one of the toughest players of his era and suffered countless big hits during his long 240-game career with the Saints.

Danny Frawley (second from the left with his family), AFL great turned media personality, died after his car slammed into a tree near Ballarat, Victoria, just one day after his 56th birthday on September 9, 2019

‘He had also engaged in poor decision-making and conduct that caused conflict in his marriage.’

His wife said it took Frawley at least a year to recover from his mental issues and was never the same person again.

‘To his family, Mr Frawley would lie in bed all week and be extremely needy, but he would be able to put on a brave ‘public face’ and give the appearance of normal functioning,’ Coroner Paresa Spanos said in the report.

‘From about April 2019, she observed that he became increasingly erratic and began to eat and drink in excess,’ the report read.

By late June 2019, the coroner said Frawley had gained 25kg and was becoming ‘even more self-absorbed’.

‘He avoided his family’s Christmas in July celebrations, preferring to spend the time with a country AFL team that he had been coaching,’ Ms Spanos said.

He last saw his doctor on September 6 – three days before his death – after returning from a trip to Hong Kong with his wife.

‘Mr Frawley admitted to episodic dark thoughts when he thought about his marriage but vehemently denied any active suicidal intent or plan,’ the report said.

‘Over the following weekend, Mrs Frawley told her husband that they needed to take a break and he needed to move out for a while to give themselves some space.’

On the day of his death on September 9, the report said Frawley called his doctor to move a 10am appointment that morning to 4.30pm that afternoon.

Between midday and 1pm, his doctor’s receptionist received a mysterious phone call lasting 15 seconds where she could not hear anything on the line.

At 1.40pm, a passer-by discovered the wreckage of Frawley’s 2013 Holden Colorado near a tree on Old Melbourne Road, Millbrook, east of Ballarat.

The car had been travelling at a minimum speed of 132km/h when it struck the tree.

The report said the Coroner’s Mental Health Investigator had been unable to gauge how much Frawley’s brain disease contributed to his death.

Ms Spanos though called for more research into the condition and how it leads to neurological dysfunction.

The coroner’s report said Frawley’s CTE neurological disease was potentially linked to his depression. He (centre) is pictured with his family

The report said from April 2019 Frawley ‘became increasingly erratic and began to eat and drink in excess’. Above, he is cheered off the ground after his last match in 1995

The weight of evidence supported the conclusion Frawley took his own life.

He captained the club for 177 games – making him the Saints’ longest-serving skipper before being surpassed by Nick Riewoldt in 2016.

Frawley was inducted into St Kilda’s Hall of Fame in 2007 and after his playing career coached Richmond for five years until 2004.

He then became chief executive of the AFL Coaches Association.

The AFL earlier this year doubled the time concussed players were barred from returning to the field from six to 12 days.

Johnson: We must live with Corona in the long term like influenza