Corporate lawyer, 50, says she ‘died briefly’ at the hands of a brutal lover during 6-hour assault

A high-flying corporate lawyer has told how she ‘died briefly’ at the hands of a brutal lover amid a savage six hour assault.

Sandra Ten Hoope, 50, from Amsterdam, ‘faded out’ as she was repeatedly kicked, punched and strangled during the horrific attack which left her in hospital with two black eyes, severe bruising and three broken ribs.

She recalls drifting off ‘to a beautiful, peaceful place’ as her then raging drug-fuelled Peruvian boyfriend Pepe squeezed his hands around her neck and tried to throttle the life out of her. 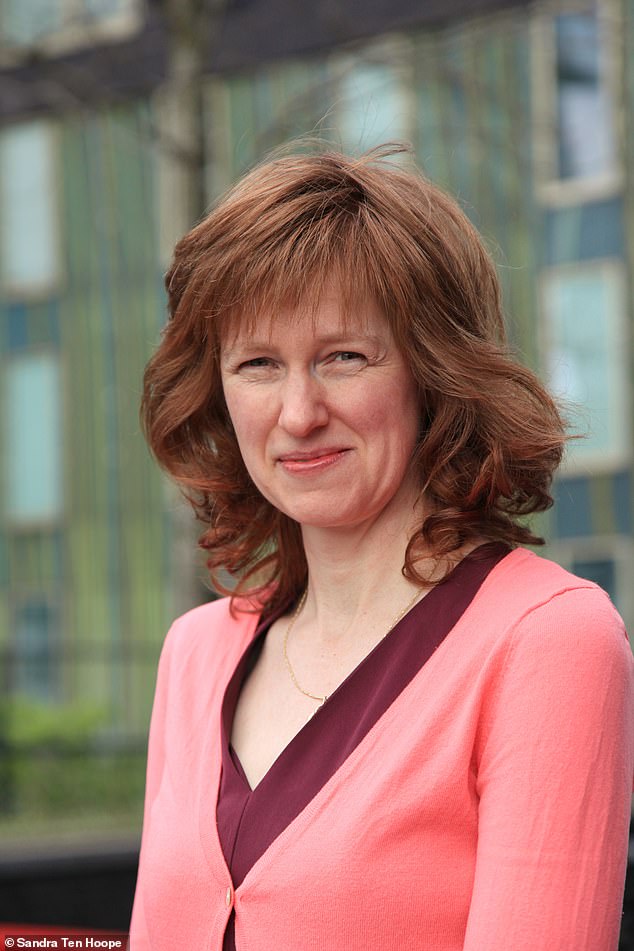 High-flying corporate lawyer Sandra Ten Hoope, 50, who was born in Amsterdam, has told how she ‘died briefly’ at the hands of a brutal lover amid a savage six hour assault 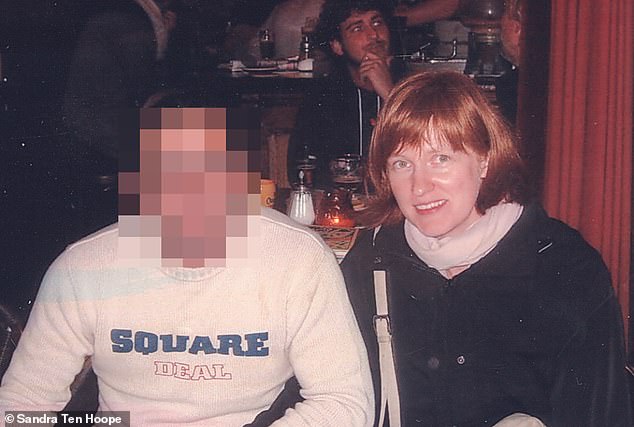 Sandra, pictured with another previous lover whom she refers to as ‘the addict’ in her book, details her troubled relationships in Do Not Try HIM At Home

Sandra eventually found the courage to leave her abuser, and has since shared her ordeal as well as stories from other past disturbing relationships in her book Do Not Try HIM At Home.

She hopes by telling her story it will encourage professional women to rewrite their stories and the scripts of their lives.

Speaking about this particularly vicious assault, she told FEMAIL: ‘It was absolutely terrifying. He just did not stop hitting, kicking and trying to strangle me.

‘At some point I faded out. It could have been a near-death experience, but I sense I died briefly that night as a result of strangulation. 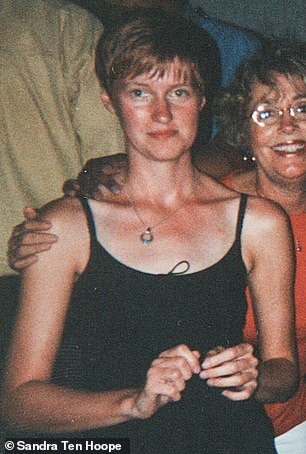 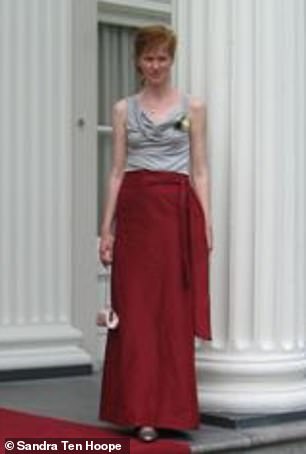 Sandra, pictured left in Curacao in 2003, before she met ‘the abuser’ and right a week before she found the courage to leave her violent ex behind in 2007 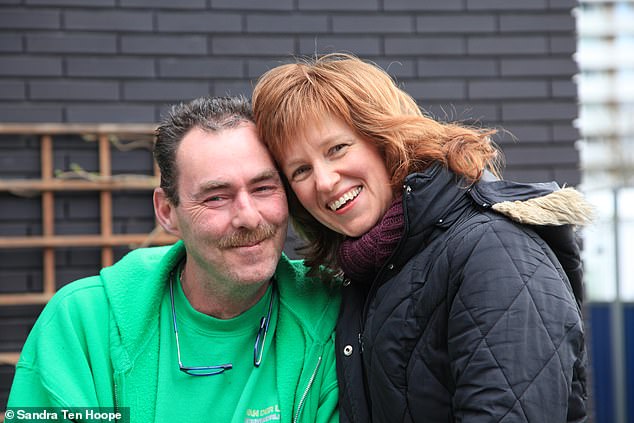 Sandra, who is now with John, 52, pictured, who was her first ever boyfriend, has recently become a spokesperson for UK charity Women’s Aid

‘We can debate whether I was truly dead or not, or whether there is an after-life. But I do recall when I faded out it was the most beautiful experience I have ever had in my life. I was ever so angry when I woke up because I wasn’t in that place.

‘What I encountered that night was really the force of evil. There was no stopping him. There was a need to destroy me, even a need to kill me.’

Sandra, who earned a six-figure salary working for a fiduciary services firm, managing the assets of European royalty, chose to share the story of her previous turbulent personal life to banish the myth that domestic abuse happens to women in low income, working class households.

As well as the physical attack, Sandra recalled how the thug called her ‘all sorts of names in all sorts of languages’, as he continued hitting and kicking her. 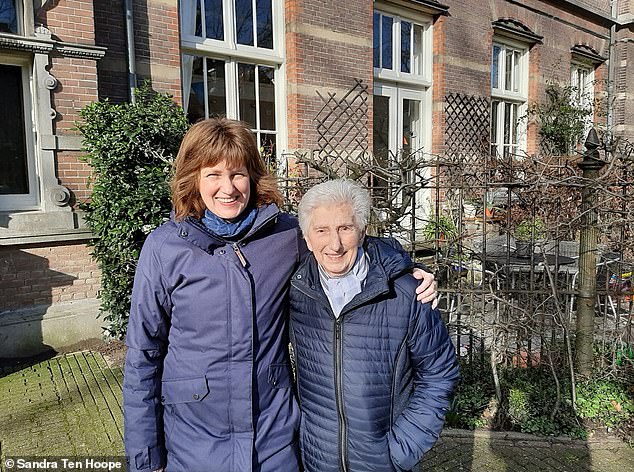 Sandra hopes by telling her story, it will encourage professional women to rewrite their stories and the scripts of their lives. Pictured with her mother

‘It started between midnight and 1am and went on until I could see daybreak, so around 6am. It was blow after blow.

‘Then there was a pause of about 15 minutes, like it was over. He said, “Let’s get you into the bathroom and patch you up a bit,” but then he started again.

‘That’s when I thought I was going to die. I don’t know why it started again. It might have been to do with the cocaine he had been taking. 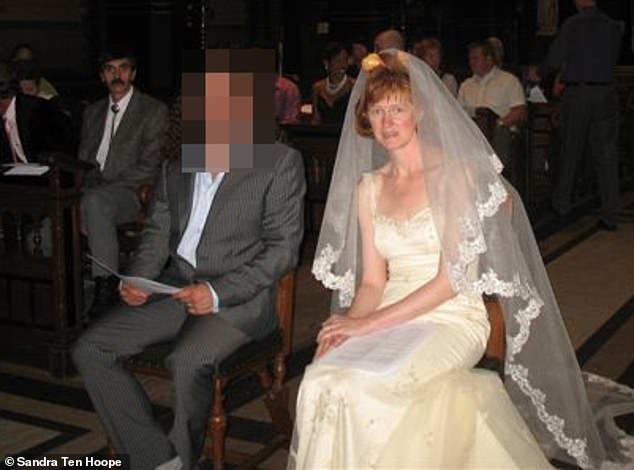 As well as detailing her torment at the hands of ‘the abuser’ in the book, Sandra also talks readers through her experiences with ‘the womaniser’ and ‘the addict’ – whom she ended up marrying (pictured) despite his drug abuse. They had a child but split after four years together

‘It started again for another hour. Eventually he had no energy left and said, “Let’s go to sleep. We’ll get you to a doctor in the morning and we can say you fell over in the bathroom”. I said “Sure”.’

What are the warning signs of domestic abuse?

In CBS Reality’s Uncovering Intimate Partner Abuse Dr Jane Monckton-Smith, of the University of Gloucestershire, reveals the early warning signs that a relationship will become abusive.

The forensic criminologist says that abusive relationships will start like a normal one, but always get very intense quickly.

She explained: ‘Perhaps they would declare love very, very quickly.

‘This can be interpreted as love and perhaps it is but sometimes people will try to move in with you very, very quickly. If somebody’s looking to live with you within weeks I would see that as a red flag.’

Sometimes abuse can begin when there is a big life change for the couple the relationship can become abusive, such as if the woman gets pregnant.

She explained: ‘Sometimes if there’s a pregnancy suddenly the attention isn’t on the abuser enough and they feel their needs are not being met so that can definitely be a trigger.’

Dr Monckton-Smith also said that subtle control tactics like asking you to stop seeing friends or wanting to spend every moment with you can be a sign of abuse.

When her exhausted partner drifted off next to her, terrified Sandra began quietly counting, calculating the number of steps it would take to escape, and the number of seconds each move would take.

She recalled: ‘I was thinking, I have got to get out of here.

‘So, I started counting. In that moment I was deadly calm. Survival mode really kicked in.’

Eventually, wearing just her pyjamas, Sandra eased herself off the bed, crept across the landing and down the stairs, grabbed her shoes, keys, coat and purse and snuck out of the front door into the early morning sun.

In agony from the beating and bleeding from facial wounds, she managed to stumble four miles along a remote country lane until help finally arrived in the shape of a friend who lived nearby.

Often, after suffering horrible injuries at the hands of her lover, Sandra would call in sick until the cuts and bruises healed, then return to the office to oversee multi-million pound business transactions.

The mother-of-one said: ‘I know only too well that many women in high-profile corporate roles are in toxic relationships, but don’t know how to escape or to break the cycle they find themselves in.

‘I want to use my experience and extensive corporate mentoring and coaching skills to help them recognise patterns of abuse, and re-build themselves one step at a time.

‘I don’t want anyone else to find themselves in a situation where they lay there counting, trying to work out the best escape route.

‘For me the office was always my sanctuary, my safe place. I arrived there and I did my thing, and I did it well. I had to separate everything that was going on at home and in relationships.

‘But that will not be the case for every professional woman.’

The attack in which she nearly died occurred in March 2006, after she moved with her partner to a sprawling 1900s four-bedroom farmhouse outside Amsterdam. 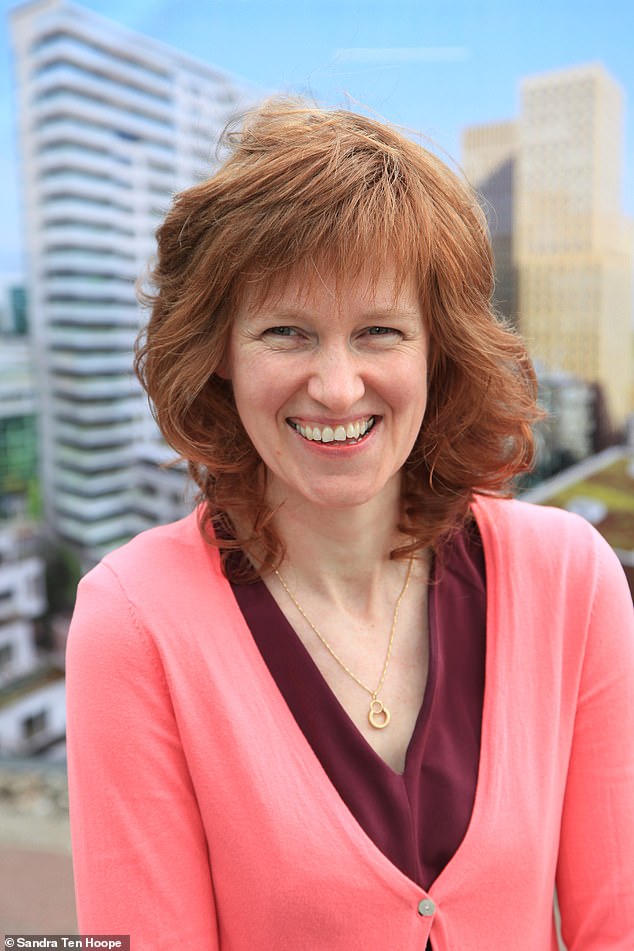 She was released from hospital 24-hours later and Sandra agreed to aid prosecutors which resulted in her ex-partner serving a six-month jail term. 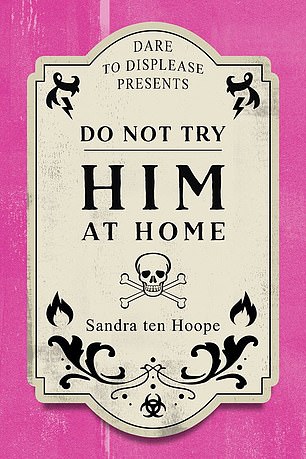 As well as detailing her torment at the hands of ‘the abuser’ in the book, she also talks readers through her experiences with ‘the womaniser’ and ‘the addict’ – whom she ended up marrying despite his drug abuse.

They had a child but split after four years together.

But Sandra’s story does have a happy ending.

She is now with John, 52, who was her first ever boyfriend.

They have been living together since 2016.

She added: ‘I have been through so much, and felt it was the time to share my experiences in the hope they help other people avoid making the mistakes I did.’

Sandra has recently become a spokesperson for UK charity Women’s Aid and is donating £1 from every book sold to help raise vital funds for them.

IAN HERBERT: Anton Ferdinand’s racism doc says a lot about John Terry but even more about the FA

'It was very beautiful and incredibly gentle': Nick Kamen's partner of 15 years tells of model's...