A tattooist who creates realistic areolas for people who’ve undergone mastectomies has slammed Facebook for censoring her work.

She has shared her frustration after Facebook blocked her from advertising her work on the basis that she was violating their terms and conditions by showing nudity and sexual content, Cornwall Live reported.

The social media platform allows content showcasing nudity intended as medicinal or educational, but Vicky has claimed her pictures have repeatedly been removed by Facebook.

This is in spite of the fact she has not shared pictures of actual skin, but only of the silicon mould she’s been practicing on.

Femail has reached out to Facebook for comment. The company said they were investigating the matter, and added that post-mastectomy areola tattoos were included in their community standards, which allow posts which are clearly intended as medical or educationa. 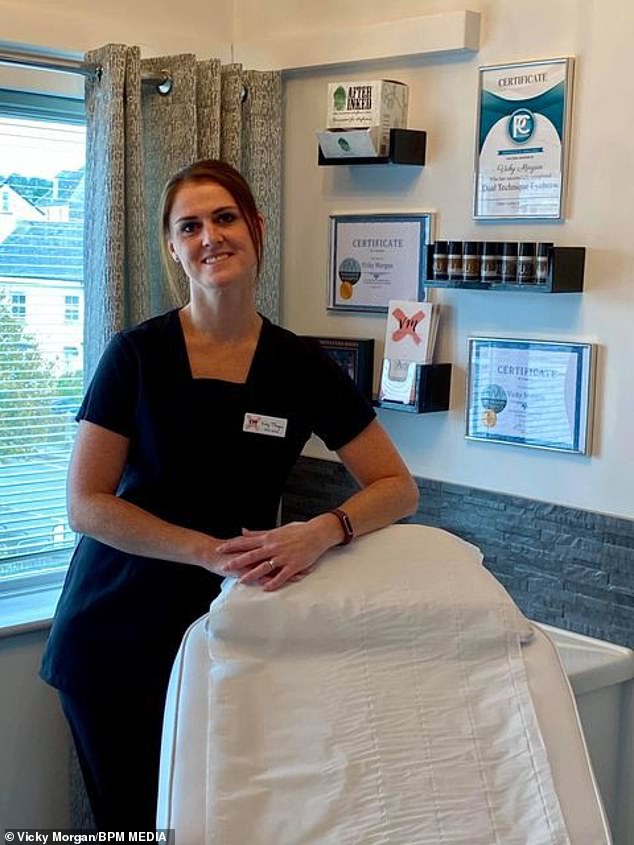 Vicky Morgan, pictured, from Wadebridge, Cornwall, has shared her frustration after Facebook have repeatedly removed her picture of her 3D areola tattoo work for violating their terms and conditions regarding the depiction of nudity

‘For a lot of people this part signifies the last step in their breast cancer journey,’ Vicky said.

‘Some do have them tattooed on after the surgery but its not in as much detail as this. Surgeons are great but there is nobody else that offers in Cornwall what I do now,’ she added.

Vicky, who’s been a beauty therapist for 20 years, was mainly working on tattoos of eyebrows, but recently completed training to create post-mastectomy areolas for men and women.

The 3D tattoos give cancer patients stunning and realistic areolas onto their mastectomy scars. 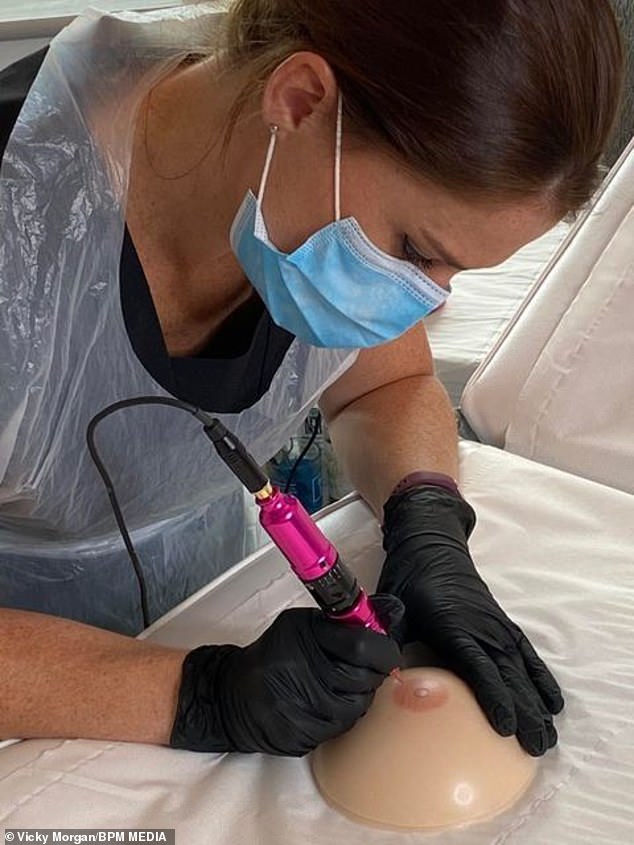 Vicky has been practicing on a mould to create the ultra-realistic tattoos, which she offers for free for mastectomy patients in Cornwall

The cosmetic artist is now trying to advertise the treatment, which she offers for free at monthly clinics.

In order to advertise this new service, Vicky has been attempting to share pictures of her mould online through social media.

However, her pictures are repeatedly removed for violating Facebook’s terms and condition for showing nudity – in spite of the platform allowing such pictures be shared for educational or medical purposes.

‘Its very frustrating,’ Vicky said. ‘Because all you want to do is help people and it’s the last step of their breast cancer journey.’

The beautician explained that having their areola tattooed was a milestone for cancer patients having undergone several treatments to fight their condition, including mastectomy, chemotherapy and reconstructive surgery. 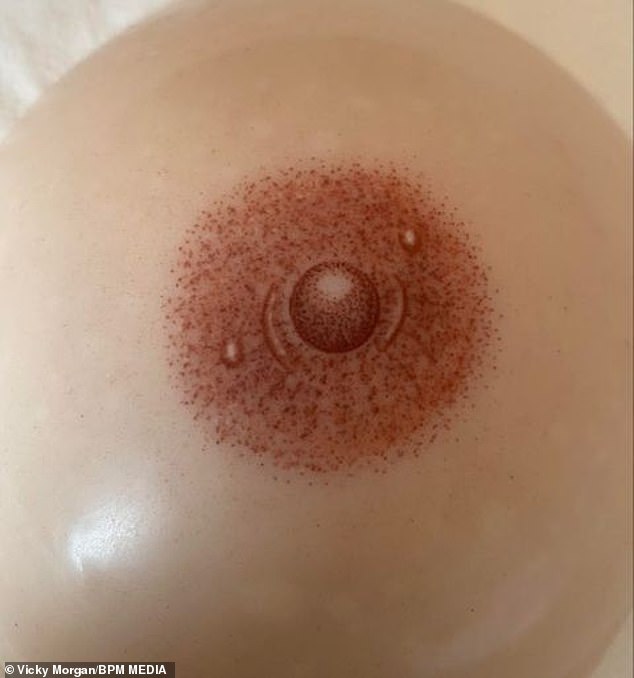 A close up of the areola tattoo completed by Vicky that Facebook keeps banning from their platform. Vicky offers the treatment for free

She said the tattoos could help women reconnect with their femininity after months or years of treatments.

She added that the treatment was equally as important for men, with male breast cancer being on the rise.

‘It shouldn’t happen and it is just hugely frustrating,’ Vicky said. ‘When I am trying to promote such an amazing free treatment to women, and men too, that have gone through this awful experience to make them feel good about themselves again.’

In order to bypass Facebook’s terms and conditions, Vicky has had to become creative and managed to share a picture of her work by adding an areola snap next to a bunch of flowers.

However, she explained a small picture of her areola mould was not enough to showcase the amount of detail her work provides.

She wishes to be able to share a video that would show the process of the areola tattoo being done as well as different angles from the final result.

Chiropractic Billing Made Easy: A Complete Guide to Getting Paid for Your Services