Could Australia have a White Christmas? One state to see SNOW and below ZERO temp on December 25


Unique La Nina weather patterns are giving Australians the chance to experience a White Christmas in the middle of summer with snow forecast on December 25.

Forecasters have predicted Tasmanians could wake to a light dusting of snowflakes in mountain ranges near Hobart on Christmas morning.

A minimum temperature of just 9C is forecast in Hobart on Friday, with the mercury likely falling to below 0C on the peak of Kunanyi/Mount Wellington.

The chilly temperatures will see snow chasers lacing up their hiking boots amid icy conditions for a unique Australian Christmas experience on Friday. 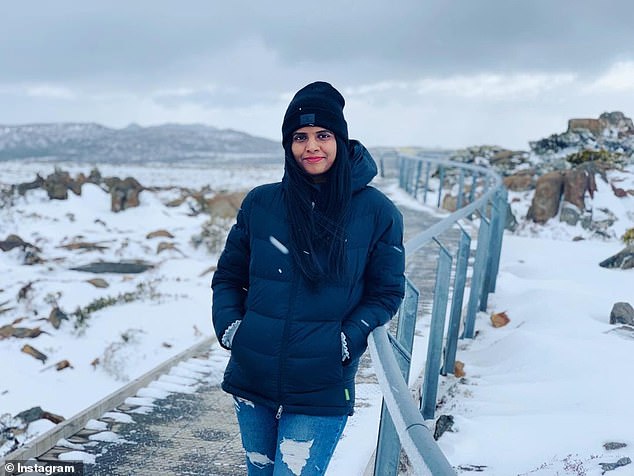 Tasmanians could experience a White Christmas with snow forecast on Friday. Pictured: a woman poses on Mount Wellington 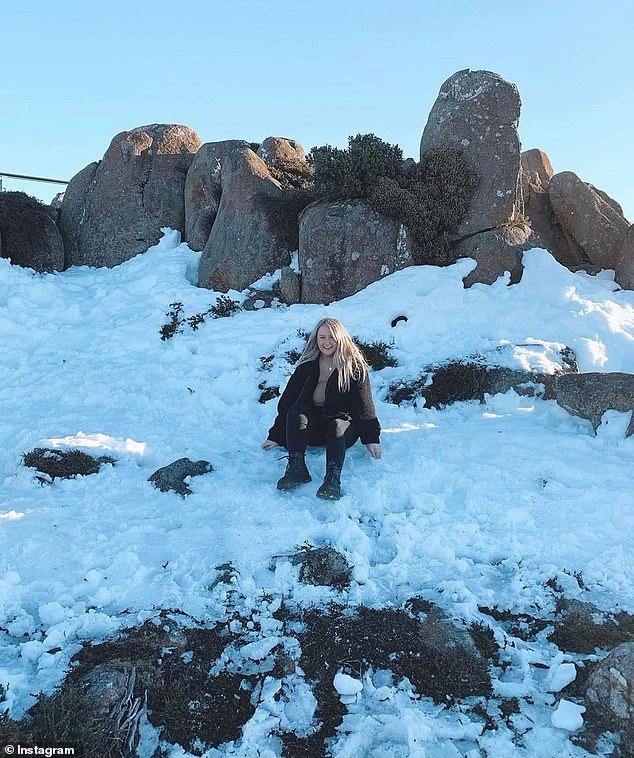 ‘On Christmas Day, it will be easily below 20C for Tasmania,’ Sky News Weather senior meteorologist Tom Saunders said, as reported by news.com.au.

‘There may be one or two snowflakes very early in the morning on the highest peaks; so if you feel like climbing a mountain you could see a White Christmas in Australia.’

Huge swathes of Australia will cop a drenching this Christmas with a months’ worth of rain expected to fall in a matter of hours in parts of Victoria.

Meteorologists warn two major weather systems in the south-east, one over South Australia and one over NSW, are set to bring heavy downpours in the coming days.

A severe weather warning for heavy rainfall was issued on Monday for central and south-west Victoria and other parts of the state including Melbourne. 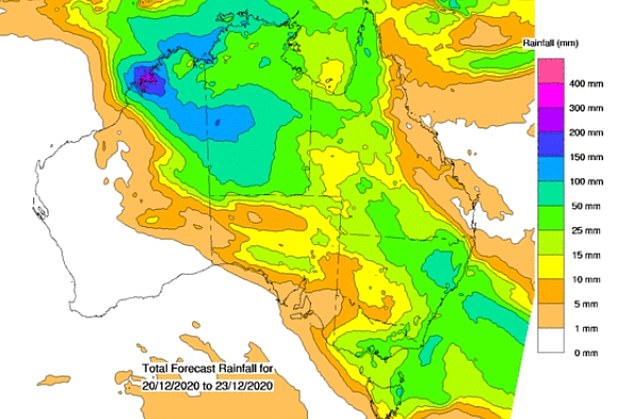 Meteorologists warn of two major weather systems in the southeast, one over South Australia and one over NSW, with Victoria caught in the middle and will bear the brunt of the severe weather 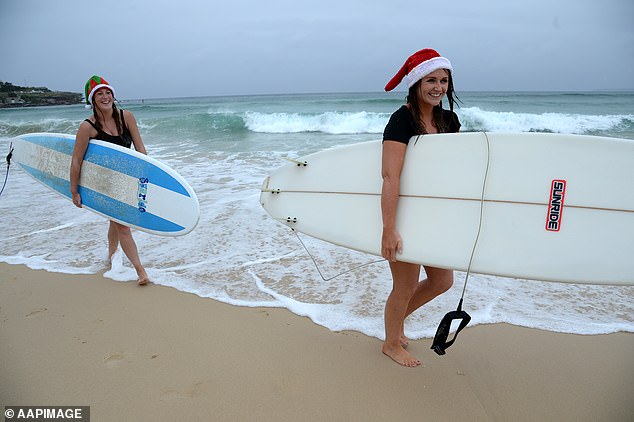 Australia is set for a wet Christmas as heavy rainfall batters most of the country (Pictured: tourists at Bondi Beach) 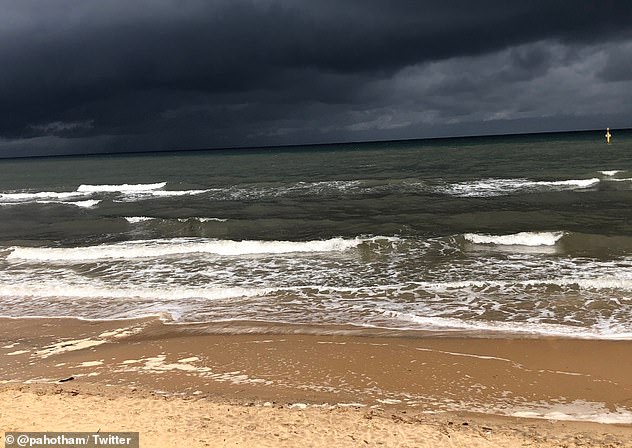 Storms seen rolling in at Frankston Beach in Melbourne. The suburb itself saw almost two-thirds of the average December rainfall in just 24 hours

Frankston and Carrum in Melbourne’s eastern suburbs received almost two-thirds of the average December rainfall in the past 24 hours.

A severe weather warning was issued by the Bureau of Meteorology for the Maryborough, Kyneton, Ballarat, Geelong, Melbourne and Bacchus Marsh areas.

‘This moisture is actually providing a conveyor belt of moisture that in combination with an upper trough is generating the heavy rainfall that we’re seeing develop across the southwest and central parts of our state,’ she told Herald Sun.

In NSW’s north, showers and thunderstorms are expected for a couple of days and flash flooding could occur. 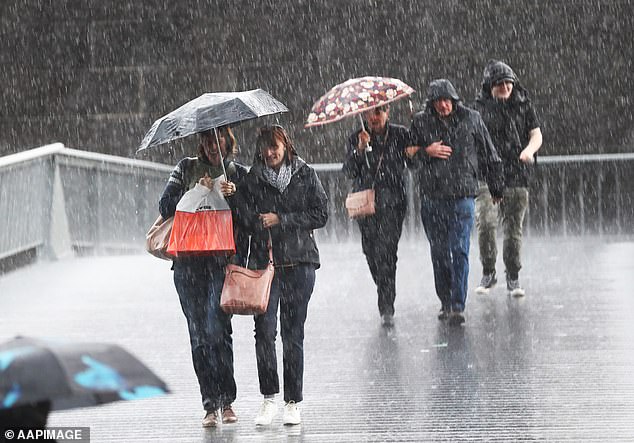 A severe weather warning was issued by the Bureau of Meteorology for the Maryborough, Kyneton, Ballarat, Geelong, Melbourne and Bacchus Marsh areas (Pictured: Pedestrians walking under the rain in Melbourne) 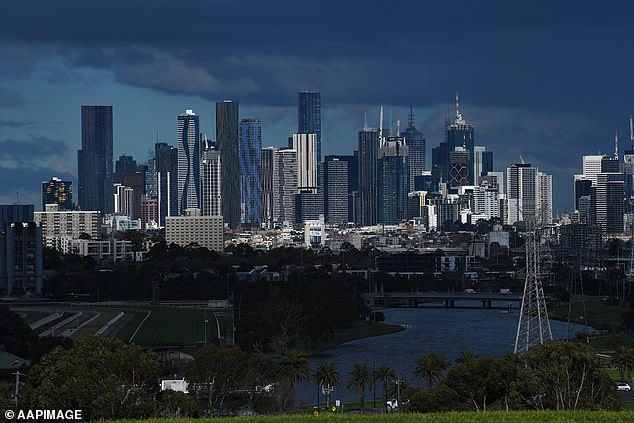 A dark and gloomy skyline in Melbourne is seen earlier this year. A months’ worth of rainfall is set to fall in the state 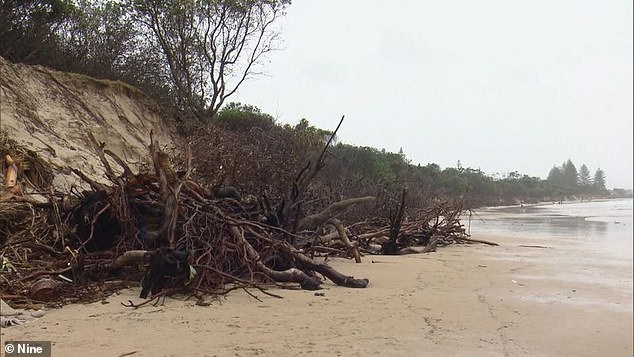 ‘In the lead-up to Christmas there is a lot of wet weather across Australia, especially for northern and eastern and central parts of the country,’ Sky News Weather meteorologist Rob Sharpe said, news.com.au reported.

‘Through the Hunter Valley and many other parts of the NSW coastline and surrounding areas we’ve seen a whole series of showers in recent days but up north it is a lot wetter than that.

‘We’ve got showers drifting across southern Queensland, in NSW we’ve got this band of rain spreading down, in South Australia we’ve got a separate rain band moving through.’

Sydney however will see showers from Christmas Eve through to Saturday when temperatures are expected to soar and the sun brings some summer warmth.

Up in Queensland, temperatures will reach a maximum of 34C with sunny and cloudy weather expected. 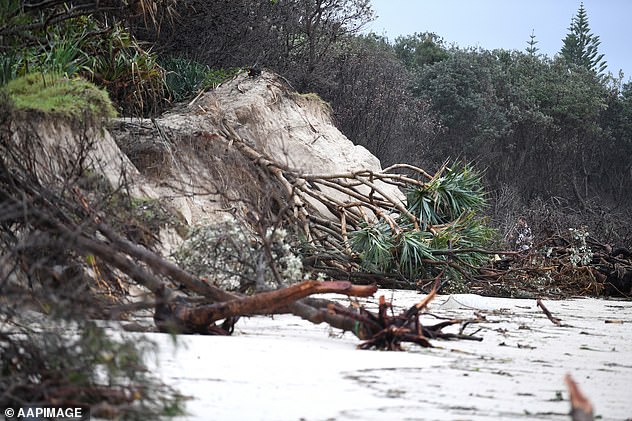 On Christmas Day, a 40 per cent chance of rain is expected with south to southeasterly winds of up to 15 to 20 km/h.

Perth is in for a hot and sunny Christmas with highs of 39C throughout the week and no chance of rain.

South Australia saw rain on Tuesday and then cloudy weather for the rest of the week until Christmas when the sun will come out.

In Hobart, there will be rain for the next two days before it eases. Christmas however will be cloudy with the mercury reaching just 17C.

The country’s capital will enjoy a slightly warmer Christmas eve at 27C and only 23C on Christmas Day.

Temperatures in Darwin will hover in the 30s with rain and storms to batter the state throughout the week.