Could getting enough vitamin D reduce COVID-19 death risks by 52%?


People who get enough vitamin D are at a 52 percent lower risk of dying of COVID-19 than people who are deficient for the ‘sunshine vitamin,’ new research reveals.

Vitamin D plays a crucial role in the immune system and may combat inflammation. These features may make it a key player in the body’s fight against coronavirus.

Rates of vitamin D deficiency are also higher in some of the same groups who have been hardest hit by coronavirus: people of color and  elderly people. It’s by no means a causal link, but suggests that vitamin D could play a role in who gets COVI-19, who gets sickest from it, and who is spared altogether.

Boston University’s Dr Michael Holick found in his previous research that people who have enough vitamin D are 54 percent less likely to catch coronavirus in the first place.

Following on that work, he and his team have found that people who don’t get enough of the vitamin are far more likely to become severely ill, develop sepsis or even die after contracting coronavirus.

Because vitamin D deficiency is common in people with other disease that raise coronavirus risks, it’s impossible to say exactly how many lives would be spared if  we all got our daily dose of the sunshine vitamin.

But we know that about 42 percent of the US population is vitamin D deficient. If  that rate held true for the more 203,000 Americans who died of coronavirus, perhaps some 85,000 would have fared better with improved vitamin D levels.

In Britain 20 per cent of the population suffer from the deficiency, according to the British Nutrition Foundation. When the rate is applied to the UK’s 41,936 deaths from coronavirus, it suggests 8,387 of them could have been helped with improved levels of Vitamin D. 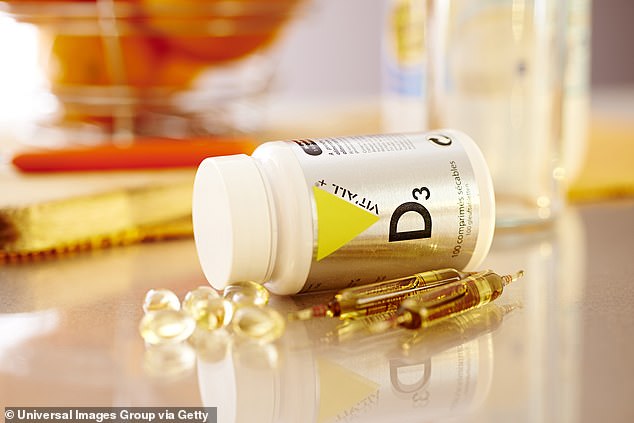 Whether or not vitamin D supplements should be taken to reduce coronavirus risks is controversial, but getting enough of the ‘sunshine vitamin’ plays a role the immune system’s ability to fight infection and keep inflammation from running getting out of control.  New research suggests COVID-19 patients who get enough vitamin D are 52% less likely to die  of the infection (file)

‘This study provides direct evidence that vitamin D sufficiency can reduce the complications, including the cytokine storm (release of too many proteins into the blood too quickly) and ultimately death from COVID-19,’ Dr Holick said.

Dr Holick and his colleagues took blood samples from 235 patients admitted to hospitals in Tehran for COVID-19.

Overall, 67 percent of the patients had vitamin D levels below 30 ng/mL.

There isn’t a clear marker for the ideal level of vitamin D, but 30 ng/mL is considered a sufficient. Anything  below that is ‘insufficient,’ but won’t necessarily have broad-ranging health consequences, while levels below 20 ng/mL are considered ‘deficient.’

In the US, an estimated 42 percent of people are vitamin D deficient, but the rate varies considerably in different demographics.

About 60 percent of elderly people living in nursing homes, for example, are thought to  be  vitamin D deficient.

The most likely explanation is that they simply spend too much time indoors.

Sunlight is our primary source of vitamin D.

When we are exposed to ultraviolet (UV) radiation in rays of sunshine, it reacts with cholesterol in our skin, triggering the production of vitamin D.

In an increasingly indoor world, rates of vitamin D deficiency have climbed.

Among the patients in the BU study, those who had sufficient blood levels of vitamin D were less likely to have dangerously low blood-oxygen levels and were more likely to be conscious upon arrival at hospitals.

Patients with low levels of vitamin D were 46 percent more likely to need to be intubated or to develop acute respiratory distress syndrome (ARDS) –  the lung failure condition that proves fatal for many COVID-19 patients. 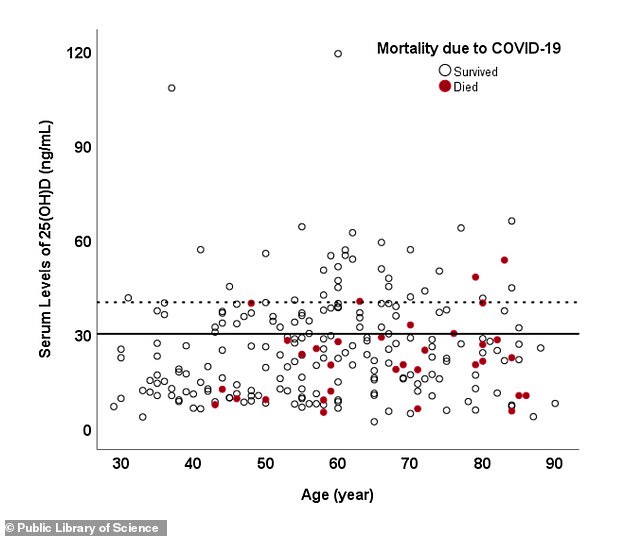 Although no one in the study under age 40 died, fatalities  (red) were more  common among vitamin  D deficient people (under the  black  line) of all ages

But the rate among vitamin D sufficient people was lower: about 64 percent had severe disease.

All of the under-40 patients included in the study survived COVID-19.

That  included just 9.7 percent of people with sufficient vitamin D levels, while 20 percent of those who had low levels of the vitamin died.

HOW CAN YOU MAKE  SURE YOU GET ENOUGH VITAMIN D?

Sunlight is our most important source of vitamin D.

UV light’s reaction with cholesterol  triggers the production of the vitamin.

But people with with darker skin have more melanin, which makes it  harder for the skin to absorb UV and for vitamin D to be made.

We can also absorb vitamin D into our systems – although in smaller doses – in our diets, by eating foods, including:

What’s more, those with particularly high vitamin D levels – 40 ng/mL – were at the lowest risk of death, with just 6.3 percent of that group dying.

To name a few: it helps immune cells bind to their target pathogens, it regulates killer T cells,  which go after everything from bacteria  to cancer and, perhaps most importantly, it helps keep the balance between ‘good’ inflammation, as immune cells flood an infection site, and  ‘bad’ inflammation, that runs haywire and starts attacking healthy cells.

Particularly, it moderates cytokines, the immune proteins that whip up into a fatal ‘storm’ in many coronavirus  patients.

‘Indeed, the anti-inflammatory role of 1,25(OH)2D’ – the chemical name for the vitamin – ‘could explain the protective role of vitamin D  against immune hyper reaction and cytokine storm in a subgroup of patients with severe COVID-19,’ the study authors wrote.

Vitamin D deficiency is common in groups with chronic conditions including heart disease and obesity, which are also more vulnerable to COVID-19. However, parsing out whether the vitamin deficiency is a factor that leads to these conditions or vice versa is complicated, and scientists are still working toward answers.

The nutrient deficiency is also common in people of color. In fact, at about 76 percent, vitamin D deficiency is nearly twice as common among black Americans than white people in the US.

Higher levels of melanin in the skin of black and brown people make it more difficult for their bodies to absorb the vitamin.

These groups have been hit disproportionately hard by coronavirus, both in terms of cases and deaths.

Because  the sun is a key element to vitamin D production, the BU researchers saw an additional parallel to coronavirus: timing.

‘It is notable that the COVID-19 outbreak began during the winter. In 1981, a “seasonal stimulus: hypothesis had been suggested to explain epidemics of influenza A around the winter solstice. The biology, physiology, and epidemiology of vitamin D point to  vitamin D as a likely candidate for the “seasonal stimulus” since the blood levels of 25(OH)D are lowest at the end of the winter,’ the study authors wrote, referring to the last major pandemic the world saw, the Spanish flu.

Mayo Clinic experts recommend getting at least 600 IU of vitamin D a day, whether via sunshine or supplements. It’s generally considered safe to take up to 2,000 IU a day, but anyone with or at risk of kidney disease should not do so, as an overload can harm kidneys, causing stones and other problems.

Taking too much can also elevate calcium levels, cause a host of digestive issues and may lead to bone loss in some cases – and scientists still don’t know what, exactly, is the optimal level of vitamin D, or how much is too much.

Will the UK election result boost or sink the stock market? Investing Show