Couple are accused of drug to murder world champion dancer

A ‘ruthless’ couple murdered a man and poisoned another with a drug known as ‘devil’s breath’ after meeting them on the dating app Grindr, a court heard today.

Diana Cristea, 18, and Joel Osei, 25, both deny killing Adrian Murphy, 43, with the drug last year at the 17th-storey flat he was staying at in Battersea, South London.

The pair then allegedly used his name to try and buy more than $80,000 (£62,000) worth of diamonds from a jeweller in New York, Croydon Crown Court heard today.

They are also accused of poisoning a second man on May 30 2019, before stealing about £2,000 of his belongings.

Prosecutor Crispin Aylett QC said the drug scopolamine, which is said to be ‘popular with robbers and rapists’ to incapacitate their victims, was used in both incidents. 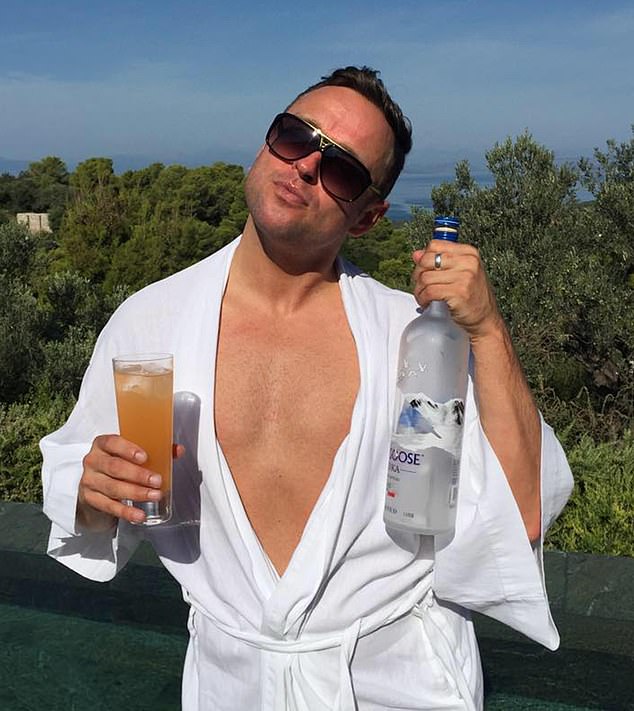 He said, while it was only Osei who met the victims in person, having contacted them through the gay dating app Grindr, Cristea was ‘egging him on’ in the background and sold the stolen items.

The former couple are both charged with murder and a count of administering a poison or noxious substance so as to endanger life, which they both deny.

They are also standing trial on several fraud charges and two counts of theft. They allegedly killed Mr Murphy with the drug between May 31 and June 5 last year.

Mr Aylett said the first victim invited Osei, who called himself ‘Remy’, back to his London property on May 30, but was ‘disappointed’ to find the defendant ‘did not seem to be particularly interested in sex’.

The court heard how the victim went to the toilet, and on his return drank a glass of orange juice that Osei had poured him, assuming it was from his fridge. 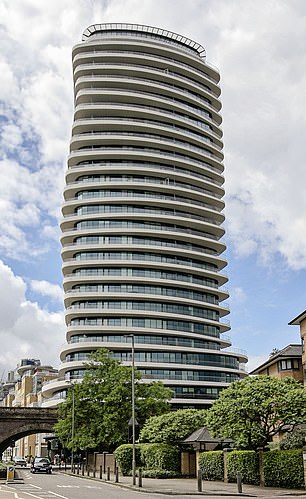 Mr Murphy had been staying at a 17th-storey flat in this block in Battersea, South London

Mr Aylett said: ‘(The victim) was to tell the police: ‘The last two things I remember is that I started to feel breathless and my head felt like this darkness coming over me.

‘I remember standing up and my legs feeling like they had been injected with lead or something, they felt solid and immovable. I remember thinking I was going to pass out, and then I must actually have passed out.’

He was later discovered by a neighbour, who called an ambulance.

The victim, who cannot be identified for legal reasons, reported that items including his wallet, bank cards and two laptops, worth about £2,000, had been stolen.

Mr Aylett said Cristea had texted and called Osei while he was at the property, and paid for a minicab to pick him up from the victim’s home.

Days later on June 1 last year, Mr Murphy, a champion Irish dancer, also met a man on Grindr, and invited him back to a flat in Battersea he was staying in.

The following day, ‘by which time Mr Murphy must have been dead’, the defendants used his name to unsuccessfully buy diamonds from a US jeweller, Mr Aylett said.

Mr Murphy’s body was found in his flat two days later on June 4 by his best friend and the property’s owner.

A Louis Vuitton bag, wallet, and laptop had been stolen, with the items worth about £2,000 in total.

The court heard that the man named ‘Remy’ and Mr Murphy’s unnamed visitor had used a phone ending in the same number, which police were able to link to Osei and his then girlfriend Cristea.

Mr Aylett said Osei was later identified by the surviving victim as being Remy, while he was also caught on camera coming out of a lift going towards Mr Murphy’s flat.

A post-mortem examination of Mr Murphy’s body found traces of the drug scopolamine, which comes from the deadly nightshade family of poisonous plants.

Mr Aylett QC said: ‘In South America, and in particularly in Colombia, it is said to be popular with both robbers and rapists who use it to incapacitate their victims, rendering them deeply unconscious for long periods of time.

‘In Colombia, they don’t call it scopolamine, in Colombia they call it ‘the devil’s breath’.’ 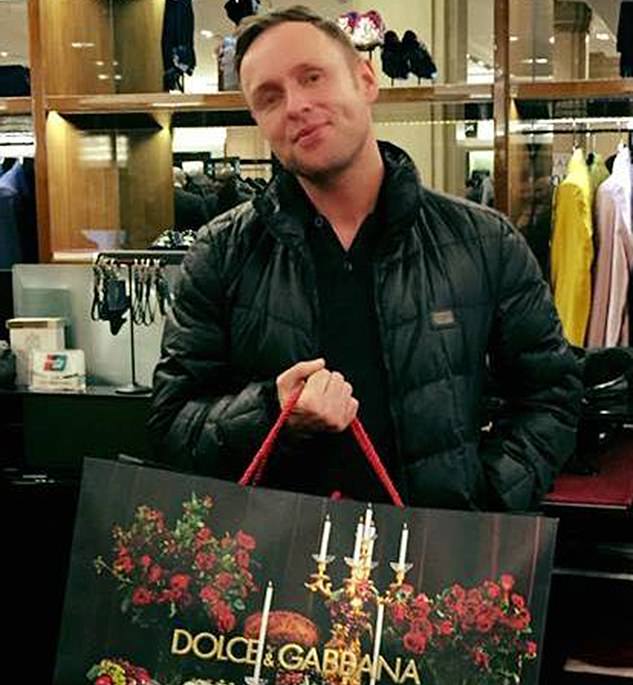 When police searched Mr Murphy’s flat, they found a Coca-Cola can and glass tumbler which contained traces of scopolamine.

8 people rescued by heat in Arizona

Nardin Kiswani..a Palestinian student who fought the Israeli occupation in America, and the Zionist lobby rallied against her | Politics news

‘Hocus Pocus 2’ Trailer Will Put A Nostalgia Spell On You: ‘We’re Back, Witches’

The drug’s presence was also found in a sample of the surviving victim’s hair.

Scopolamine, also known as hyoscine or ‘Devil’s Breath’, is made from Borrachero trees in Colombia, and used throughout the country to aid sexual predators and robbers.

The odourless powder is blown into people’s faces, which once inhaled can cause victims to lose their memory, free will, and in high enough doses, can even kill. It has been described as ‘the most dangerous drug in the world’.

In the past two years cases have been reported in Spain, France and the US. But last month, UK actor Robert Lindsay told Met Police a young woman he knew was attacked with a substance bearing a chilling resemblance to ‘Devil’s Breath’ outside a London night club.

It is widely available on the Chinese website Alibaba.com, which ships it anywhere in the world from mainland China and Ukraine.

While there are restrictions on minimum orders, you have to be a registered business, and courier shipping may take a while, one European seller is offering 1g of the drug for just $15 (£11.19).

The drug, also referred to as Burundanga in its native Colombia, is almost impossible to detect, as it disappears from the blood stream in two to six hours and can only be found in urine samples within 12.

This makes it extremely difficult for victims to prove they have been given it – as they don’t remember anything and it’s untraceable in their system.

Mr Aylett said: ‘The prosecution allege that the two defendants were a pair of ruthless grifters, scammers looking to make easy money at whatever the cost to their victims.’

The court heard that days earlier, Osei had been arrested at a music festival where he had been intending to sell caffeine tablets as drugs.

In a text message to Osei during the festival, Cristea wrote to him: ‘And when you get back, we can focus on the ginger thing and ur batty boys loool.’

Mr Aylett said: ‘It is not clear what Ms Cristea was referring to when she mentions ‘the ginger thing’, what is clear is that ‘batty boys’ is a reference to gay men.’

Cristea, of Mill Hill, North London, has admitted one count of fraud, but denies two counts of theft and six other fraud charges.

Osei, who was previously living in Seven Sisters, North London, denies two counts of theft and eight counts of fraud.

Police obtained a phone billing for the first victim’s mobile and identified a number ending in 2528 which the couple’s first target had contacted in order to meet ‘Remy’, jurors heard.

Mr Murphy also contacted the same number before Osei allegedly made his way to a flat where he was staying two days later, it was said.

‘At some point Adrian Murphy must have provided Joel Osei with his name, address and telephone number,’ said Mr Aylett.

‘The following day, these entries were deleted from Osei’s internet history..’

Mr Murphy had worked as a dance teacher and choreographer at the Royal Academy of Dance in Battersea but had been on a year-long sabbatical at the time of his death, the court heard.

He was living in a flat in Battersea Reach near Wandsworth Bridge, but sometimes stayed at a luxury apartment belonging to ex-partner Simon Kime in Lombard Wharf.

Mr Kime supported his friend financially and paid the rent on his flat, the court heard.

Jurors were told Mr Murphy and his ex-partner had dinner together the night before Mr Kime went on holiday to Portugal on 28 May.

Mr Aylett said: ‘At around 10:15am on 1 June Mr Murphy left his flat in Battersea Reach.’

Jurors heard CCTV picked up Mr Murphy as he arrived at Mr Kime’s home and took the lift to the 17th floor.

Osei and Cristea booked a room in a guest house on Simpson Street in Battersea, near where Mr Murphy was staying in Lombard Wharf the same day, the court heard

The prosecutor said: ‘A couple of minutes later at 22:07 Ms Cristea’s telephone was used to book a minicab from Simpsons Street to Lombard Road – but it was later cancelled – no doubt when it was realised that Lombard Wharf was within walking distance.’ 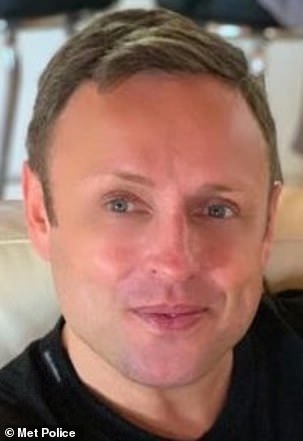 Osei was picked up by CCTV cameras at Mr Kime’s luxury apartment block on Lombard Wharf as he allegedly entered the building and took the lift to the 17th floor at 22:26, the court heard.

Mr Aylett said: ‘As you will readily appreciate, the prosecutor’s case is that Joel Osei would have been the last person to see Adrian Murphy alive.’

Osei was again picked up by the CCTV camera in the reception area of the building as he allegedly left the flat while Cristea tried to call him multiple times, jurors were told.

Mr Aylett said: ‘He can be seen speaking to the concierge. He can also be seen to be carrying a Louis Vuitton holdall.’

He said the couple stayed on and off at the Simpson Street hotel during the following days while they allegedly made several purchases on different cards belonging to Mr Murphy.

Cristea is said to have also taken a photo of Mr Murphy’s Louis Vuitton bag before advertising it for sale online for £300 along with five Dolce & Gabbana belts for £200.

The pair were arrested on 11 June, the court heard.

8 people rescued by heat in Arizona

In Arizona, eight people who participated in a reality show had to be rescued after being affected by the heat. According to Phoenix firefighters, those affected suffered from...

Nardin Kiswani..a Palestinian student who fought the Israeli occupation in America, and the Zionist lobby rallied against her | Politics news

New York- Palestinian activists, students, and supporters of the Palestinian cause in the United States are being met with fierce campaigns led by the Zionist lobby, the intensity...

‘Hocus Pocus 2’ Trailer Will Put A Nostalgia Spell On You: ‘We’re Back, Witches’

Far less terrifying than any of Bette Midler’s recent tweets, the first trailer for the long-awaited “Hocus Pocus” sequel arrived on Tuesday, making it a glorious morning indeed....

Abortion laws by state: Where abortions are illegal after Roe v. Wade overturned

You really do not want to see this critter on our beaches. Here’s what to do if you uncover 1

You do not want to see this critter on our beaches. Here’s what to do if you locate just one Source connection hartford vehicle insurance store motor vehicle...