Moment council worker flies 10 FEET in air as he’s mowed down by ‘road rage’ driver, 54, after row over him using his indicator: Court sees video of incident as motorist denies attempted murder

By Jaya Narain for MailOnline

Jurors were today shown the moment a council worker was mowed down by an irate driver after the pair had a furious argument in the street.

Steven Smith was sent flying 10ft into the air after a car hurtled directly at him as he walked down the street.

He flew over some railings and into a front garden and landed in some bushes where he was left bruised and bleeding from the head.

As he was stuck in the bushes the driver got out of his car and tried to punch him in the head.

Today Arthur McGhie, 54, went on trial at Hove Crown Court charged with attempted murder and assaulting an off-duty officer who tried to arrest him.

He has already pleaded guilty to a lesser charge of attempted grievous bodily harm, as well as admitting assault on another emergency worker and dangerous driving.

The jury heard Mr Smith had been driving through the town and was approaching a lane when he saw a Hyundai car indicating to turn right. 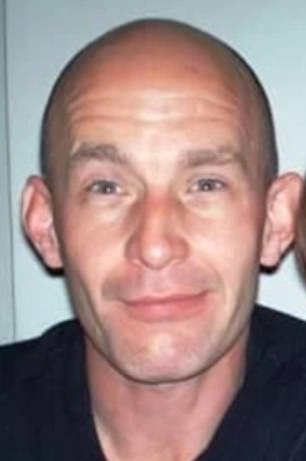 Arthur McGhie, 54, is accused of mowing down a council worker in a road rage row. He has denied attempted murder and dangerous driving but pleaded guilty to a lesser charge of attempted grievous bodily harm

Mr Smith, a traffic warden manager for Mid Sussex District Council, slowed down and flashed his headlights indicating the driver could make the turning.

However the driver did not respond so Mr Smith slowed to a stop and flashed the car a second time.

When the driver again failed to turn Mr Smith turned down the road himself and was followed closely behind by the Hyundai.

As he drove down the road he was overtaken by the car which then pulled up at a small roundabout.

Mr Smith, who was in council uniform, also pulled over and got out of his car when he was allegedly confronted by McGhie who accused him of being ‘sneaky’ and ‘trying to trap people’.

When he saw the emblem on Mr Smith’s shirt he said: ‘Yeah you lot, you’re sneaky’.

He also branded him ‘vermin’ and ‘a vulture’ before the confrontation turned into a scuffle in the street.

Mr Smith walked off towards his car but as he was strolling down the street he heard a ‘scream’ and the sound of a ‘car engine revving.’

Rachel Beckett, prosecuting, said: ‘He looked over his right shoulder and saw the defendant in his vehicle driving at him.

‘He immediately felt his back hit the bonnet of the car and his head hitting the windscreen.’

The jury were told Mr Smith was thrown into a hedge by the impact and was left unable to move as the defendant’s car careered out of control hitting a lamp post and Virginmedia box.

McGhie then allegedly got out of his car, marched over and tried to punch Mr Smith in the face as he stood stuck in the bush.

He then got back into his car – which had a broken windscreen – and drove off, narrowly avoiding colliding with another car.

Today the jury were shown the two minute video footage of the incident which was captured by a resident on his phone.

The footage shows McGhie getting into his Hyundai after the dispute, revving the car loudly and then driving straight at Mr Smith as he walked on the pavement.

On the phone footage the car hits Mr Smith in the back causing a loud bang before the council worker is sent flying over some railings and into a garden bush.

Police and ambulances were called to the scene and Mr Smith was taken to hospital suffering from extensive cuts and severe bruising all over his head and body as well as serious pain in his right elbow, forearm and left hand.

McGhie was later that day arrested after being spotted by an off-duty officer PC Phoebe Apps who recognised him from a video of the incident she had seen earlier on social media.

However as she tried to arrest him he threw a series of punches at her and two others officers had to help her.

Miss Beckett said: ‘The Crown’s case is that by driving deliberately and hitting him with his vehicle, he intended at that time to kill him.’

Strong to severe thunderstorms including large hail, damaging winds and tornadoes will impact the Central Plains...