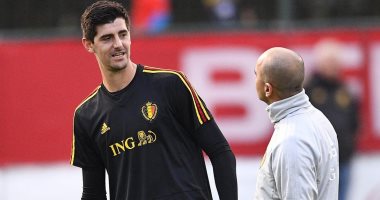 Belgium coach Roberto Martinez has agreed to return veteran goalkeeper Thibaut Courtois to Real Madrid, to start preparations for the resumption of the local season.

Thibaut Courtois participated with the Belgium national team, against Estonia and the Czech Republic in the fourth and fifth round of European qualifying for the 2022 World Cup.

According to the Spanish newspaper “AS”, Thibaut Courtois obtained the approval of the Belgium coach to leave the Red Devils camp and return to Real Madrid, as the latter decided to give the opportunity to another goalkeeper against Belarus in the sixth round scheduled for tomorrow, Wednesday.

Belgium had defeated Estonia 5-2 in the fourth round of European qualifying for the World Cup, and then beat the Czech Republic 3-0 in the fifth round.

It is worth noting that the Belgium team occupies the table of the fifth group standings in the European qualifiers for the 2022 World Cup with 13 points, 6 points behind the nearest competition, the runner-up, with 7 points.

Somali Health Minister: The world has failed to protect the vulnerable in conflict areas