The courts backlog which has worsened during the pandemic could quadruple by 2024 without action, a study has found.

The research by crime and justice consultancy Crest Advisory says that there could be a backlog of 195,000 cases in courts where the most serious trials are heard in 2024.

Crest says there is ‘catastrophic risk to public confidence, and effective enforcement of the law’ and that longer sittings and new courts are needed to tackle the problem, according to the BBC.

While the authors of the study say this is worst-case scenario, the Ministry of Justice says the study is based on ‘extreme assumptions’.

In March 2020, almost half of all courts were closed and jury trials were paused to minimise social interaction between court users.

After jury trials were halted and around half of courts closed, up to nine in 10 hearings used remote technology to continue making progress throughout the pandemic. 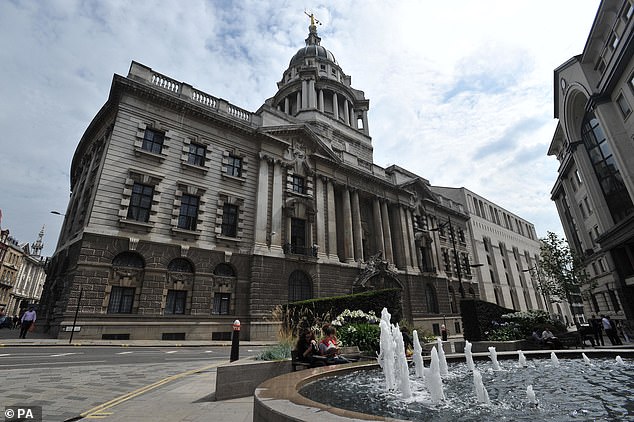 Researchers have warned that the courts backlog of the most serious cases could rise to 195,000 by 2024 if the Government does not increase court capacity. Pictured: The Old Bailey

Some jury trials resumed in May, after almost two months on hold, but this summer Justice Secretary Robert Buckland QC warned that clearing the lockdown-induced backlog could continue into next year.

According to the Criminal Bar Association, the latest statistics show there is a current backlog of more than 47,000 crown court cases in the system.

Crest carried out research into how the pandemic will affect this backlog over the next four years, taking into account factors including the long-term impact of Covid on unemployment which could cause a rise in some crime and the current time frame for cases at court.

According to the BBC, the consultancy firm says court capacity needs to be doubled to prevent the backlog growing to unstable levels.

The study suggests longer sitting hours, new buildings, a greater use of existing courts and technology and more part-time judges.

In July, the Government opened ten Nightingale courts across the country but these were to deal with non-custodial crime cases as well as civil matters and tribunals.

In his weekly update, chair of the Criminal Bar Association, James Mullholland QC said:  ‘We are now a week away from the promised 250 courtrooms actually conducting Crown Court trials.

‘An analysis of the trial rooms in use today, including available Nightingale Courts, amounts to less than 200, estimated at 195.

‘We are still not at the stage where the number matches the limited courtrooms available for jury trials last year and which managed to deal during that period with only about one third of the effective trials that are currently outstanding.

‘Meanwhile the number of vacated trials continues to increase.

‘The ongoing lack of capacity and the increase in the Custody Time Limits period hits hardest those in custody waiting to be tried.’ 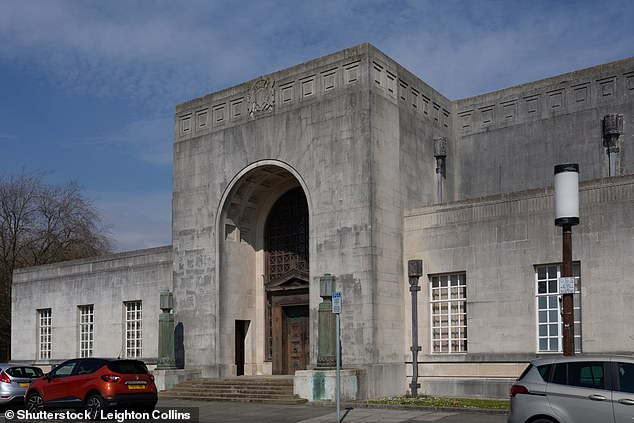 A Nightingale court based in the Swansea Council Chambers in Wales (pictured). In March 2020, almost half of all courts were closed and jury trials were paused to minimise social interaction between court users. Nightingale courts opened across UK to help with backlog

He added: ‘Consequently, in summer, 1 in 7 of all those in prison was awaiting trial.

‘This is the highest annual figure in five years and an increase of 25% over the last year.

‘The way forward has been clear for many months. The government needed actively to seek out a large number of additional buildings so that capacity could be significantly increased and the backlog reduced without increasing the risk to others.

‘The fact that this is still not happening is disturbing bearing in mind the consequences.’

A Ministry of Justice spokesperson told the BBC the Crest study’s assumptions ‘do not stand up to reasonable scrutiny – such as vast rises in crime and charging which have no clear rationale’.

They added: ‘They also fail to take account of our extensive efforts to limit the impact of the pandemic on the justice system.

‘As a result of these, magistrates’ court backlogs are already falling, Crown Courts are listing more jury trials every week, and we’re spending £80m on a range of measures to further drive this recovery, including the recruitment of 1,600 additional staff.’