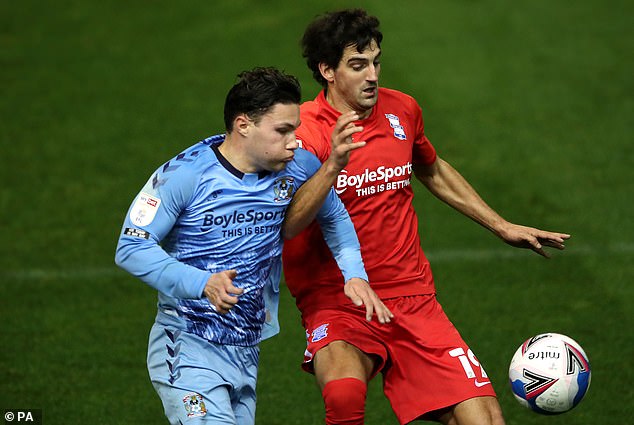 This St Andrew’s groundshare derby of landlords away to tenants was certainly a novelty but ended in a disappointing stalemate.

Birmingham, the “away” side in their own stadium against Coventry, were left to rue three Lukas Jutkiewicz chances that went begging.

He was left unmarked to meet Mikel San Jose’s perfect cross in the first-half but somehow steered his header wide.

Eight minutes from time, the tall forward sent Maxime Colin’s cross firmly down into the ground but Coventry keeper Marko Marosi used his fingertips to guide it onto the underside of the bar.

And Jutkiewicz couldn’t sort his feet out when unmarked a few yards out in the dying moments and so Birmingham had to settle for a point.

The stalemate leaves Coventry teetering just above the relegation places and indeed they will slip into the bottom three if Wycombe or Sheffield Wednesday win on Saturday.

Birmingham are now winless at St Andrew’s in their last three outings – two home games and this “away” one – and imagining them pushing for the play-offs requires quite a leap of faith at the minute.

They had the two clear-cut chances of the game, however, both Lukas Jutkiewicz headers.

This meeting, played out before swathes of empty blue seats, was always going to lack the sense of novelty and occasion of the sides’ meetings in the fourth round of the FA Cup last season.

Birmingham were granted 9,000 tickets as the “away” side in the original game while Coventry, then a League One outfit, twice came within seconds of causing an upset in the replay before bowing out on penalties.

Now both tenant and landlord have lower half Championship status with ambitions to climb fast following two pretty uninspiring starts to the season.

Coventry looked the more up for it early on, with Birmingham’s defenders twice having to block off the lively Tyler Walker as he threatened to break clear in the opening minutes.

But Aitor Karanka’s side have proven they’re happy to allow their opponents plenty of the ball and counter-punch when the opportunity arises. In last month’s meeting with Huddersfield, they saw just 23 per cent of possession but carved out 14 chances and won 2-1.

So despite Coventry’s initiative, Birmingham, wearing red change colours in their own stadium, had the first clear-cut chance and a very good one at that.

Mikel San Jose whipped in an inviting cross from the left and Jutkiewicz peeled away instinctively from his marker at the back post. Jutkiewicz has made a speciality of converting such aerial chances but this time couldn’t adjust his body and headed wide.

Coventry heeded the warning and the eager Walker was soon scampering through again, played in by Ben Sheaf, before dragging a cross-cum-shot that wasn’t really either.

Minutes later, a hopeful lofted ball by Liam Kelly bounced awkwardly for two Birmingham defenders and Walker stole in behind. Reading the trajectory of the ball was tricky and in the end it struck the underside of Walker’s chin, essentially hitting keeper Neil Etheridge who’d raced off his line to claim it.

Another Walker strike shortly after the break ricocheted kindly into the path of Callum O’Hare but, forced wide by the spin on the ball, he couldn’t turn it back past the sprawling Etheridge.

But there was undoubtedly more adventure about Birmingham after the break, with Jutkiewicz turning his man and feeding a pass into Ivan Sunjic who low shot was dragged wide.

As we entered the final 20 minutes, some very poor Coventry marking allowed substitute Jon Toral a free header at a corner but he cleared the bar.

San Jose tested the handling skills of Marosi with a drilled low shot from 25 yards after some neat chest control.

Jutkiewicz would go on to have two good openings as Birmingham pushed hardest in the final few minutes but it wasn’t his – or anyone’s – night.