The source of Melbourne’s most worrying Covid cluster which has left millions locked down for two weeks has finally been found, a returned traveller from Sri Lanka who arrived in the city a month ago.

Five million people locked down in the city could finally be freed within days with just two new infections found on Tuesday, both linked to known sources.

The traveller arrived on May 8 from Sri Lanka and tested positive that day in hotel quarantine in Melbourne, carrying the Indian Delta strain.

Questions remain about how the Indian Delta variant leaked into the community, with the acting premier explaining it may have spread on the phone, during transit or in the hotel itself.

The West Melbourne outbreak is linked to the North Melbourne Primary School, and involves several children, while the other outbreaks in the city are linked to the Indian Cappa variant.

The welcome news means Melbourne’s lockdown is likely to be lifted as scheduled at 11.59pm on Thursday, with restrictions likely easing to those currently in place in regional Victoria, source claimed. 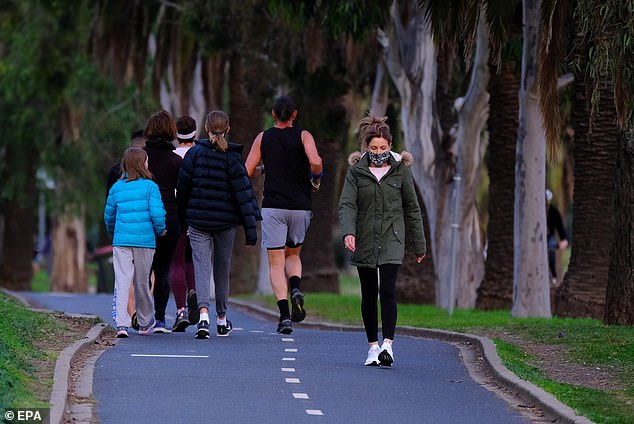 ‘Nobody knows exactly what they are. It’s terrific they have happened in a quarantine environment,’ Dr McRae told Nine News.

‘Yes, we know how they linked. But what was the interaction of all of those people with others?’

Victoria recorded just two new locally acquired cases on Tuesday, both of which are linked to existing outbreaks, taking the total number of local cases to 85.

The Department of Health confirmed both are linked to the current outbreaks, which involve the Delta and Kappa variants. 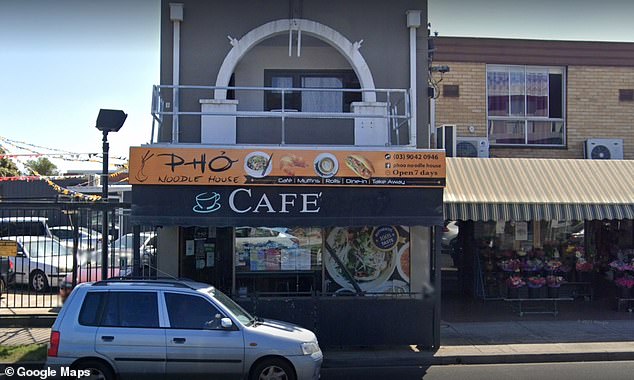 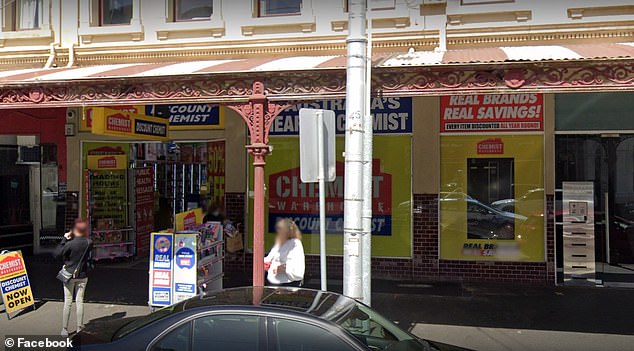 Downgraded restrictions implemented in regional Victoria when it exited lockdown on Friday include mask wearing indoors, caps on home and public gatherings, and capacity restrictions on offices, venues, bars and restaurants.

However, sources said Melbourne schools will likely return to in-class learning and children’s sports matches will be permitted.

It is understood the government on Monday notified key industries about the changes from midnight Thursday.

Meanwhile, an urgent alert has been issued for McDonald’s and other Melbourne takeaway shops after Covid-infected customers attended the venues over the weekend.

If health bosses were to uncover infections linked to any of these venues, they could extend lockdown further as it would be deemed as uncontrolled community spread.

The latest exposure sites include Chemist Warehouse in South Melbourne, IGA in Southbank and two McDonald’s stores in Flemington and Campbellfield.

Twenty & Six Espresso in the CBD, Red Rooster Strathmore, Pho Noodle House in Coburg North, Bardali Dine Restaurant and Bar in Glenroy and Honker Burgers in Mickleham have also been added to the list. 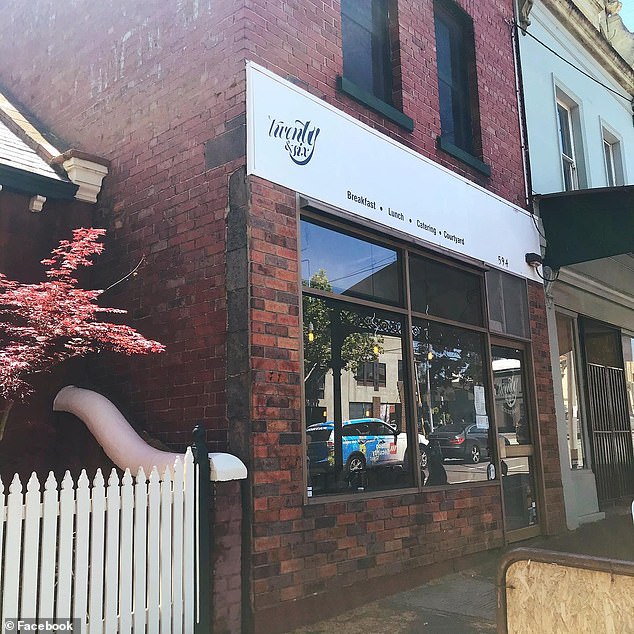 Anyone who has visited the following locations must urgently get tested and isolate until a negative result has been received:

View a full list of the exposure sites at: https://www.coronavirus.vic.gov.au/exposure-sites

Victoria’s Chief Health Officer Brett Sutton said Melbourne’s lockdown was on track to end at 11.59pm on Thursday, though he ruled out a return to the relaxed restrictions in place before the outbreak.

‘It’s frustrating,’ he said. ‘People want to know what things will look like three days from now.’

‘We see different changes every day and they can be something from left field, there can be something very short in terms of new linkages, no wastewater deductions, no new exposure sides, we need to see it play out,’ he said.

Professor Sutton admitted it would not be a total ‘snap back’ to normal when the lockdown was lifted.

‘It is certainly not a snap-back to large gatherings and a full MCG,’ he said.

Asked what restrictions would look like come Friday, he said: ‘It’s not something I can speak to now. It’s early days still’.

Acting Premier James Merlino had previously flagged Melbourne would move to a similar set of restrictions to that of regional Victoria, with people unable to travel during the Queen’s Birthday long weekend.

Four of the new cases are linked to the city’s outbreak of the Kappa variant, which began in the City of Whittlesea and spread to several locations across Melbourne, including Port Melbourne.

That outbreak now totals 33 active cases in Whittlesea and 31 in Port Melbourne.

One of the cases is a cleaner at a construction site in Queen Street in Melbourne’s CBD, which has been listed as a Tier 1 exposure site.

About 400 of 500 close contacts linked to the site have tested negative so far.

The remaining three cases are linked to an outbreak of the Kappa variant at Arcare Maidstone in Melbourne’s northwest, two of which were announced on Sunday.

The additional case is an aged care worker.

Some 24,265 Victorians were tested on Sunday and 17,719 received a vaccine dose at state-run sites.

Health Minister Martin Foley confirmed four of the new cases were linked to the state’s outbreak of the Delta variant, which originated in India.

He said the cases – three children and an adult – were close contacts of people who had already tested positive for COVID-19.

The Delta variant outbreak now totals 14, though authorities are no closer to finding out how a family from West Melbourne first contracted the variant.

Victoria recorded 11 new coronavirus infections on Monday, but they are all close contacts of existing cases or people in quarantine.

Sources said a ‘lesser setback’, such as a couple of days of double digit case numbers, was unlikely to disrupt the plan as evidence shows the outbreaks are under control. 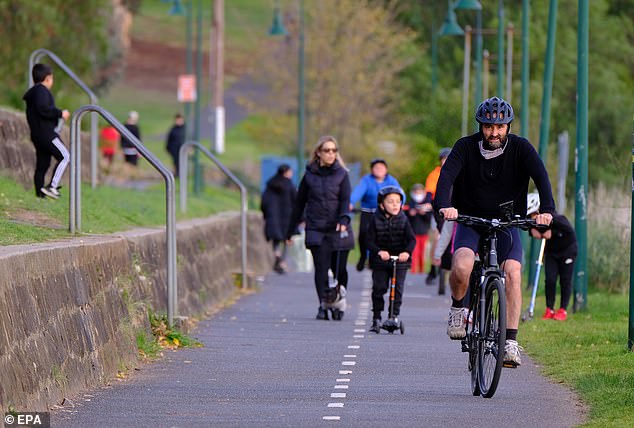 The Delta variant outbreak now totals 14, though authorities are no closer to finding out how a family from West Melbourne first contracted the variant

Thousands of primary contacts currently serving home quarantine will be screened with a 13-day Covid test in a bid to identify and contain any further cases.

The end of lockdown will offer relief for thousands of businesses who were forced to close and stand down staff when the state government introduced a seven-day ‘circuit breaker’ on May 27, which was extended in Melbourne a week later.

The insider information comes as Prime Minister Scott Morrison on Monday called on the Victorian government to lift lockdown restrictions as soon as possible.

Innes Willox from the Australian Industry Group said the prolonged Victorian lockdown seemed increasingly unnecessary and harmful, with only a handful of connected cases each day.

The prime minister said he also wants Victoria to reopen, particularly for parents with schoolchildren at home.

Measles mishap – On Friday, the state’s health bureaucrats admitted they misled suffering Victorians with claims the latest Indian ‘Kappa’ variant of Covid – B.1.617.1 was an ‘absolute beast’ that had infected Melburnians was akin to the measles virus.

Measles, with a reproduction number of between 12 and 18, turns out to be significantly more infectious.

The wrong Woolworths – Health authorities issued a warning for the wrong suburban Woolworths after picking up traces of the virus in the Epping and Wollert area of northern Melbourne last night.

The original exposure site of Woolworths Epping on the corner of Cooper and High Streets was an ‘error’ and meant to be the Epping North supermarket.

The hotel quarantine boss who said ‘#f*ckrisk’ – Matiu Bush was stood down as Victoria’s general manager of infection prevention and control in May after it emerged they refused a Covid-19 test and failed to sanitise or properly use face masks.

Bush, who uses they and them pronouns, was reported to authorities twice over the leaked breaches, The Australian reported.

Bush had used the slogan ‘#f*ckrisk’ to show how the healthcare sector had become ‘obsessed with risk and in doing so stifled creativity’ in 2019 while running neighbourhood charity One Good Street.

The catastrophic Victorian hotel quarantine program with no-one to blame – The virus leaked out of Melbourne hotel quarantine and sparked a six-week lockdown in July, which included a night-time curfew.

A taxpayer-funded inquiry into the bungled hotel quarantine program failed to find out how who was responsible for the decision to hire private security guards rather than bring in assistance from the Australian Defence Force.

‘It was a program which failed to meet its primary objective to keep us safe from the virus,’ counsel assisting Ben Ihle said during closing submissions.

In September, it emerged the budget for the inquiry had blown out to $5.7million.

The snoozing security guard – In August, ABC’s Four Corners obtained footage of a security guard asleep during a shift at a Melbourne quarantine hotel when he should have been monitoring returned travellers

How can I avoid side-effects of blood pressure drugs? DR MARTIN SCURR answers your health questions

Tom Cotton: Democrats are going to pay a price for their policies

Inside the Newtown Chilwell fire station conversion in Geelong

Freedom from European human rights rulings: British judges could no longer be 'bound' by ECHR decisions...