Covid-19 Australia: Victoria’s lockdown to be extended as virus spreads from stranger to stranger


A second week of lockdown looms for 6.5 million Victorians amid growing concerns of how the latest coronavirus outbreak has spread.

The highly infectious outbreak grew to 54 cases on Tuesday, including nine new locally-acquired cases and two in hotel quarantine.

Six of those local infections had been confirmed a day earlier.

There are growing concerns about how the outbreak has spread after some cases  emerged from ‘brushing past’ strangers who unwittingly transmitted the virus.

Authorities have refused to rule out extending the state’s seven day ‘circuit breaker’ lockdown as the list of exposure sites swelled to 329 venues.

At least four of the 54 locally transmitted cases have come from ‘fleeting’ contact. 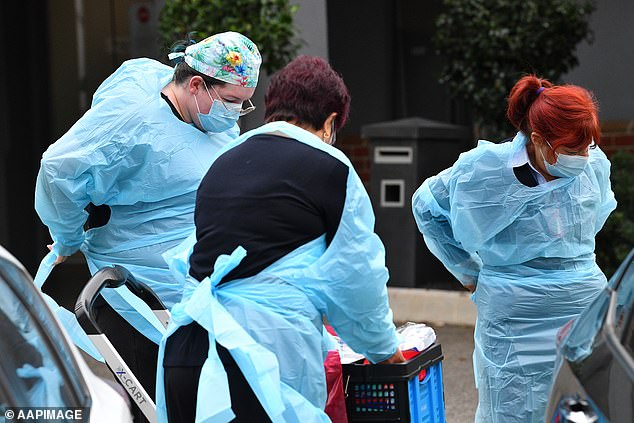 ‘What we’re seeing now is people are brushing past each other in a small shop, they are going to a display home, they are looking at photos in a Telstra shop,’ Victoria’s  COVID-19 testing commander Jeroen Weimar told reporters.

‘This is relatively speaking, relatively fleeting. They do not know each other’s names, and that is very different from what we have been before.’

‘We are used with previous variants, we are more used to transmission occurring in the home, in the workplace, where people know each other already, not all of those big social settings,’ he said. ‘These are quite different.’

The outbreak, which originated in hotel quarantine in South Australia last month, is ‘playing out a bit differently to earlier outbreaks’ in Victoria.

‘There is evidence of casual acquisition instead of those in direct close contact like friends at a pub, family members,’ health minister Martin Foley said.

Authorities refused to confirm whether lockdown will be longer, just two days out from a major decision to extend the gruelling restrictions.

‘My job is to keep going hard until we have everybody positive under control, lockdown, isolating safety,’ Mr Weimar said

Two of Tuesday’s three cases not reported previously were primary close contacts who were quarantining while infectious.

A major concern to health authorities were three cases linked to an aged care facility in Melbourne’s northwest on Monday after two workers at Arcare Maidstone and a 99-year-old resident tested positive for Covid-19.

None of the latest cases announced on Tuesday are linked to aged care.

Genomic sequencing has confirmed the Arcare worker is directly linked to the South Australian hotel outbreak quarantine in early May.

‘That is at least confirming in our mind that this is all the one related cluster from the South Australian hotel breach,’ Mr Foley said

‘I’m also able to advise that all staff and residents at Blue Cross Sunshine aged care facility have tested negative other than that one case reported on yesterday, the crossover worker between Arcare Maidstone and Blue Cross Sunshine.

There have been no further positive tests at Arcare Maidstone from 146 tests.

The outbreak started when a Melbourne man who completed two weeks of hotel quarantine in South Australia, inadvertantly caught it as he was leaving the state on May 4

He boarded a plane and flew Melbourne.

‘He went to work on the fifth (of May) and the sixth, at Datapoint Melbourne, and that over the subsequent few days he went into the city, he had a curry, he visited a number of grocery stores,’ Mr Weimar said.

‘We are absolutely clear that there is a missing link between this individual and the subsequent outbreak that we have seen at Whittlesea and Port of Melbourne.’

Almost 20,500 Victorians received the Covid vaccine on Monday to take the state’s tally of doses administered past 494,000.

The shutdown is the state’s fourth lockdown since the pandemic began in early 2020.

The decision won’t depend on the number of new cases, but the type of cases and whether they are linked to already known ones or from mystery sources.

Of the 4000 close contacts currently self-isolating across Victoria, around 80 per cent have returned negative tests.

The Victorian Health Department has added numerous new Tier 1 sites to its public exposure sites list overnight, including an Aldi store, a Vietnamese restaurant and a popular shopping centre.

Anyone who has visited a Tier 1 exposure site must immediately isolate, get a Covid test and quarantine for 14 days.

Authorities also haven’t ruled out the return of the ‘ring of steel’, a series of road border checkpoints that separated Melbourne and regional Victoria during the state’s second wave of COVID-19 last year.

Sunshine: Co Do Vietnamese restaurant; May 27 between 11am-12pm; Tier 1

Anyone who visited these venues must immediately isolate, get a Covid test and quarantine for 14 days

The Masked Dancer: Dita Von Teese is unveiled as Beetroot

Legal on the public street .. Here is the new Porsche 911 GT3 race-inspired car

Gucci gears up to roll out an NFT; More luxury brands set to follow suit 2021