Covid-19 has left us too scared to perform CPR: 14% fewer people would give chest compressions


People are less likely to give life-saving CPR during the Covid-19 pandemic because of fears they may catch the infection, a study has revealed.

Researchers asked 1,360 people in 26 countries whether or not they would be willing to intervene if someone was having a cardiac arrest in public.

Compared to before the Covid-19 era, 20 per cent fewer people would give mouth-to-mouth to a stranger, if they weren’t breathing. And 14 per cent fewer claimed they would give chest compressions, which could be the difference between life and death.

The findings are concerning because it is already known that Britons are reluctant to carry out CPR, with around three in ten claiming that they would not assist in saving a dying stranger.

Survival rates for cardiac arrests — which are different to heart attacks — stand at less than 10 per cent. But CPR can more than double a person’s chance of survival outside hospital, according to the British Heart Foundation.

Scientists urged people not to be put off giving first aid due to Covid-19 and insisted the odds of getting the infection this way was tiny.

Chest compressions can still be done with a towel, while wearing a face covering to avoid catching the disease. But health regulators have already urged Britons not to carry out mouth-to-mouth over Covid-19 fears. 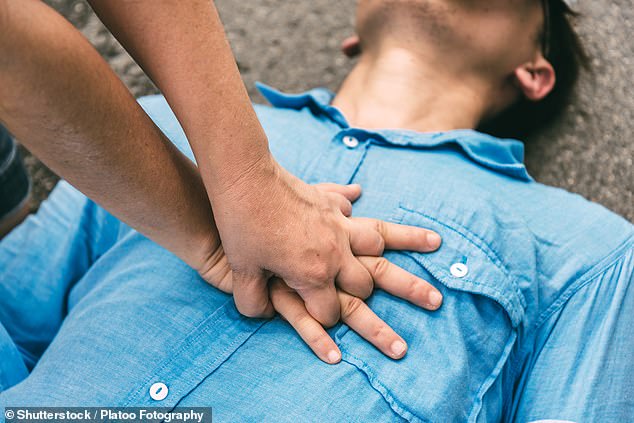 People are less likely to give life-saving CPR during the Covid-19 pandemic in fear of infection, a study has revealed (stock)

A cardiac arrest is when a person’s heart stops pumping blood around their body and they stop breathing normally.

It is different to a heart attack which is caused by a blockage in the artery supplying the heart, but sometimes a heart attack can cause cardiac arrest.

Every year in the UK, there are more than 30,000 cardiac arrests outside of hospital. The survival rate is less than one in ten. In the US, the figure is 350,000.

Data from Paris has shown decreased bystander CPR rates has led to lower survival rates from cardiac arrests during the pandemic.

But researchers in Seattle and New York, who have also investigated the claim, said they found no difference.

HOW TO GIVE CPR DURING THE PANDEMIC

Cardiopulmonary resuscitation (CPR) can be used to try to restart someone’s heart if it has stopped.

CPR should only be used in an emergency situation if someone is unconscious and not breathing.

People without CPR training should stick to hands-only chest compressions, the NHS says.

Due to the current coronavirus outbreak, there are several important changes to CPR that the Resuscitation Council UK advise.

If you find someone unconscious follow these simple steps:

Step 1: Shake and shout for help. Someone having a cardiac arrest will either not be breathing or they won’t be breathing normally. They also won’t be conscious.

But do not put your face close to theirs to check for breathing or signs of life.

Step 2: Call 999 if the person is not breathing or not breathing normally. Ask someone to get a public defibrillator which are found in public places like train stations.

Step 3: Use a towel or a piece of clothing and lay it over their mouth and nose. Check if they are breathing. If you’re sure the person is breathing normally, then put them in the recovery position.

Step 4: Give chest compressions only – do not give rescue breaths.

Kneel next to the person. Place the heel of one hand in the centre of their chest. Place your other hand on top of the first. Interlock your fingers.

With straight arms, use the heel of your hand to push the breastbone down firmly and smoothly, so that the chest is pressed down between 5–6 cm (2-2.5 inches), and release.

Do this at a rate of 100 to 120 chest compressions per minute – that’s around two per second.

Step 5: Continue until an ambulance arrives or until the person starts to show signs of regaining consciousness, such as coughing, opening their eyes, speaking, or breathing normally.

Step 6: After the ambulance have taken over wash your hands thoroughly with soap and water or use an alcohol based hand gel.

Researchers led by University of British Columbia sought to find out more, and asked social media users for their thoughts.

The questionnaires asked respondents how willing they would be to intervene if someone was suffering a cardiac arrest on a scale of 100, both before the pandemic and during, according to the paper published in Resuscitatation Plus.

The findings, however, do not reveal how many respondents would give CPR as a percentage. They only revealed how much this had changed compared to before the pandemic.

A previous study by University of Warwick researchers on behalf of the BHF found that almost one in three people would not perform CPR on a person in need.

Compared to data from pre-Covid, the Canadian study found people were 10.7 per cent less likely to check if a stranger was breathing or had pulse.

People were even less likely to call an ambulance, by a small 0.8 per cent, compared to before Covid-19. It is not clear why this is.

Willingness to help a relative or friend was much higher, but still lower than before the Covid-19 crisis.

The results were similar across all age groups and gender. But there were some key differences, such as that healthcare workers were the most likely to avoid giving chest compressions compared to before.

The researchers suggested this was because they are most informed of the dangers of Covid-19 due to their work, and this may have led to a hesitancy to risk infection.

But they also noted a previous study, by University of Michigan, which suggested the risk of catching Covid-19 is just one per cent when giving hands-only CPR, even though being close to someone and the aerosols in their breath could lead to droplet transmission.

That’s based on weighing up the odds of how likely it is the cardiac arrest victim actually has Covid-19 – less than 10 per cent, according to a cohort of almost 600 patients – and the odds of it transmitting during chest compressions, estimated to be 10 per cent.

Philippa Hobson, a senior cardiac nurse at the BHF, told MailOnline: ‘Your risk of contracting Covid-19 from helping that person is very low and without CPR they may not survive.

‘Survival rates for those who suffer an out of hospital cardiac arrest remain shockingly low, at just one in ten in the UK.

‘When someone has a cardiac arrest every second counts, so knowing what to do could make all the difference.’

‘Every minute without CPR reduces a person’s chance of surviving by around ten per cent.’

Professor Naveed Sattar, an honorary consultant in cardiovascular medicine at University of Glasgow, said the findings show ‘yet another indirect harm’ of the pandemic.

He told MailOnline: ‘None of this surprises me at all – people are anxious about getting Covid and so getting close to people or even touching them or giving rescue breaths would be really difficult for many to currently contemplate – yet another indirect harm from Covid.

‘That said, giving someone the chance to live from a cardiac arrest will compel many still to try to help and even giving chest compressions can help save someone’s life.

‘Many can do so safely as they carry masks and more and more have now had Covid leading a proportion of the population to hopefully have some level of immunity.

‘What I would also say is that severe risks arising from Covid are very low for anyone under 50 who is fit and does not have any chronic conditions.’

There have been changes to the advice given by Resuscitation Council UK for giving CPR, including that you should cover the mouth of the victim with material.

They advise against putting your face close to the victims to check for breathing or a pulse, and to give chest compressions only, not mouth-to-mouth.

The survey did find that if there was protective items available – such as a mask, gloves or something to cover the mouth – people were more inclined to help someone in cardiac arrest.

The availability of personal protective clothing (PPE) significantly increased willingness to perform chest compressions on a stranger by 8.3 per cent.

Fantasy football rankings for Week 5: Another monster game on tap for George Kittle?

When the fur needs to fly, airlines are making it tricky, costly to bring your pets. Blame COVID-19

You don’t always have to finish your course of antibiotics, suggests leading virologist