The number of COVID-19 cases has started to surge in the United States after months of decline, with the number of new cases per day doubling over the past three weeks.

Doctors and public health officials have said that the surge, in 43 out of the country’s 50 states, comes amid a rise in the Delta variant of the SARS-CoV-2 virus and stagnating vaccination numbers.

Health experts warn that the worrying increase in cases is linked to the Indian ‘Delta’ variant, which accounts for as many 97 percent of infections in some states.

Centers for Disease Control and Prevention data updated last week shows that the Delta variant, also known as B.1.617.2, makes up 51.7 percent of all new infections – making it the dominant form of the virus in the United States.

In the United States, 59 percent of adults are fully vaccinated while 68 percent have at least one shot, according to CDC data. 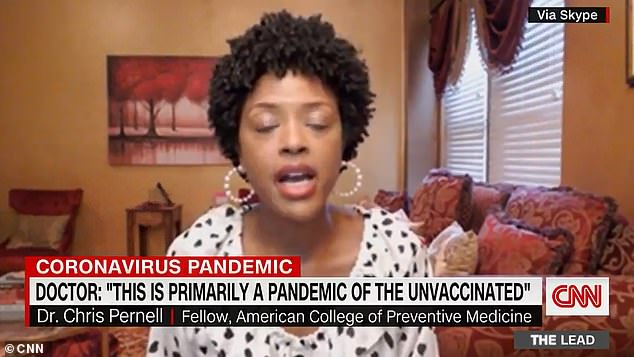 Dr. Chris Pernell, a fellow at the American College of Preventative Medicine, called it a ‘pandemic of the unvaccinated’ in an interview on Tuesday 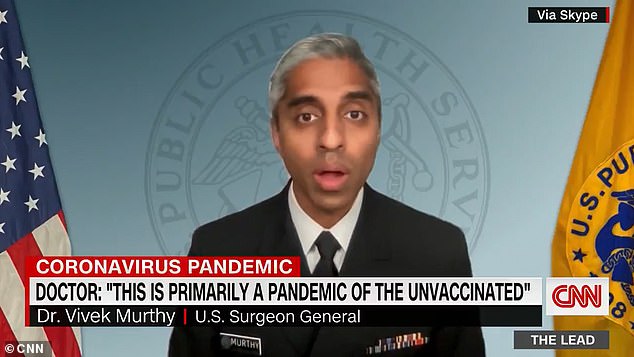 U.S. Surgeon General Vivek Murthy said the number of new infections are coming as people refuse to get tested or vaccinated against COVID-19 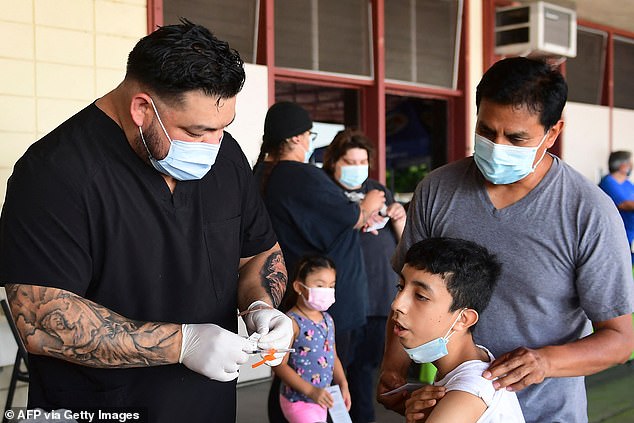 Just a quarter of children aged 12-15 have received the vaccine, it has been reported

Dr. Chris Pernell, a fellow at the American College of Preventative Medicine, called it a ‘pandemic of the unvaccinated’ in an interview with CNN on Tuesday.

‘This is primarily a pandemic of the unvaccinated. And we need to be very clear about that message,’ Dr. Pernell said.

She also hit out at states like Florida, Alabama, Arkansas, Indiana, Montana, Oklahoma, and Utah that have blocked COVID-19 vaccine requirements in schools.

‘To flat out prohibit COVID-19 vaccination is not in anyone’s best interest. When states make that move, they get in the way of good and effective public health,’ she said.

U.S. Surgeon General Vivek Murthy said the number of new infections are coming as people refuse to get tested or vaccinated against COVID-19.

‘Many people are thinking ‘COVID is over. Why do I really need to get tested?’ and this is particularly happening in areas, unfortunately, where the vaccination rates are low which is exactly where we want to be testing more,’ he said.

He also voiced support for vaccine mandates in hospitals, adding: ‘Healthcare workers have a responsibility to protect the patients.’

Confirmed infections climbed to an average of about 23,600 a day on Monday, up from 11,300 on June 23, according to Johns Hopkins University data. 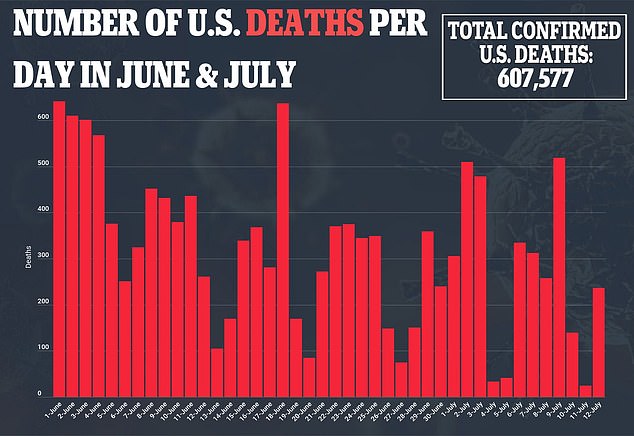 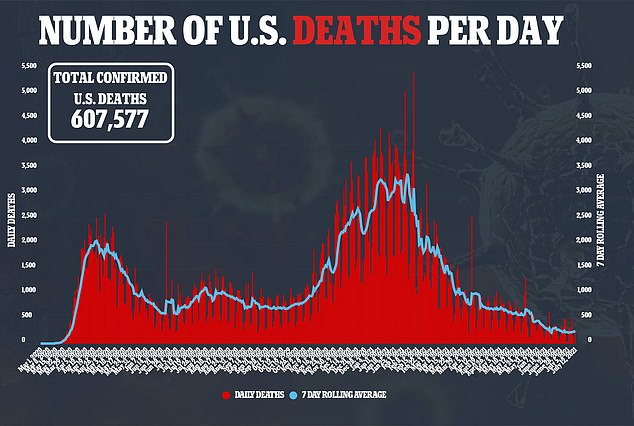 A chart shows that there have been a total of 607.577 coronavirus deaths in the United States 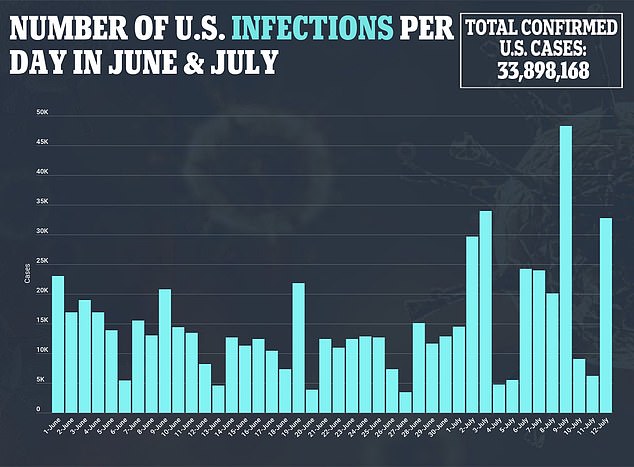 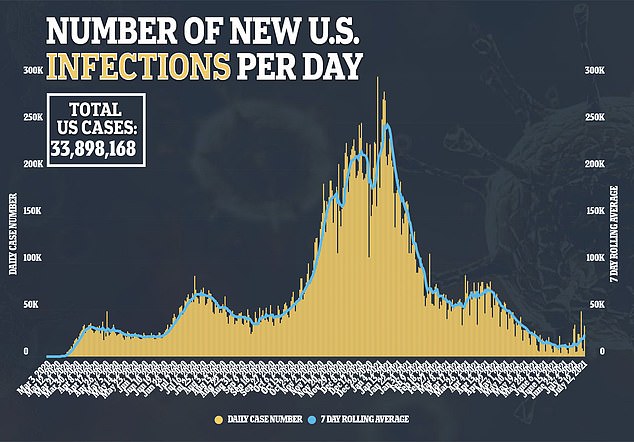 A chart shows that there have been 33,898,168 coronavirus infections in the United States since the onset of the pandemic

Even states with high vaccination rates, such as California, Illinois, New York and Vermont are seeing cases rise. All but two states – Maine and South Dakota – reported that case numbers have gone up over the past two weeks.

‘It is certainly no coincidence that we are looking at exactly the time that we would expect cases to be occurring after the July Fourth weekend,’ said Dr. Bill Powderly, co-director of the infectious-disease division at Washington University’s School of Medicine in St. Louis.

At the same time, parts of the country are running up against deep vaccine resistance, while the highly contagious mutant version of the coronavirus that was first detected in India is accounting for an ever-larger share of infections.

Nationally, 55.6% of all Americans have received at least one COVID-19 shot, according to the Centers for Disease Control and Prevention. 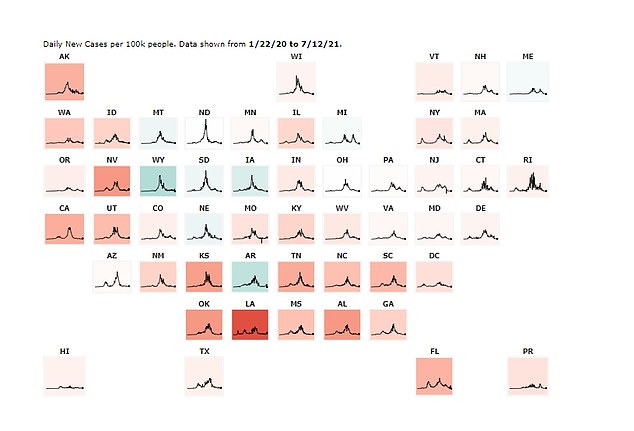 A total of 43 states and the District of Columbia are seeing their numbers of COVID-19 infections increase, according to data from John Hopkins University 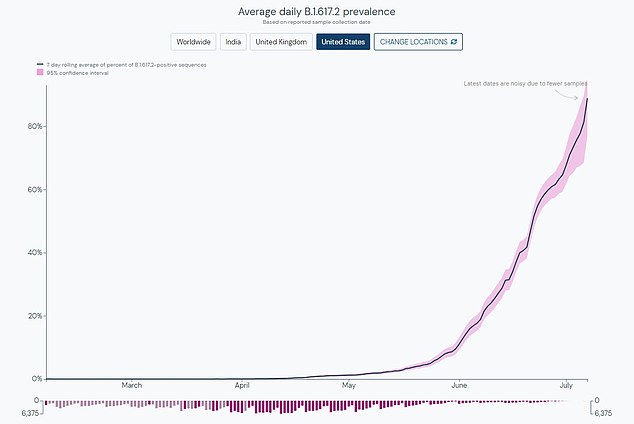 Health experts blame the spread of the Indian ‘Delta’ variant, which makes up more than half of all new infections in the country and up to 97% in some states

Even with the latest surge, cases in the U.S. are nowhere near their peak of a quarter-million per day in January. Deaths are running at under 260 per day on average after topping out at more than 3,400 over the winter — a testament to how effectively the vaccine can prevent serious illness and death in those who become infected.

Still, amid the rise, health authorities in places such as Los Angeles County and St. Louis are begging even immunized people to resume wearing masks in public. And Chicago officials announced Tuesday that unvaccinated travelers from Missouri and Arkansas must either quarantine for 10 days or have a negative COVID-19 test.

Meanwhile, the Health Department in Mississippi, which ranks dead last nationally for vaccinations, began blocking posts about COVID-19 on its Facebook page because of a ‘rise of misinformation’ about the virus and the vaccine.

Mississippi officials are also recommending that people 65 and older and those with chronic underlying conditions stay away from large indoor gatherings because of a 150% rise in hospitalizations over the past three weeks.

Additionally, the number of residents hospitalized with COVID-19 has increased 65percent between July 4 and Sunday, July 11, according to state data.

Only 33.4 percent of the population in Mississippi is fully vaccinated, CDC data shows.

‘We are way undervaccinated as a state. We have a vast pool of unimmunized people who are a perfect breeding ground for Delta variant, and it’s gonna kill folks. And it’s already killing folks.’ 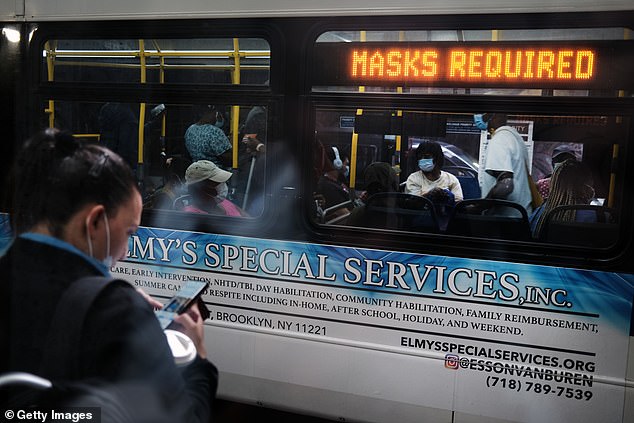 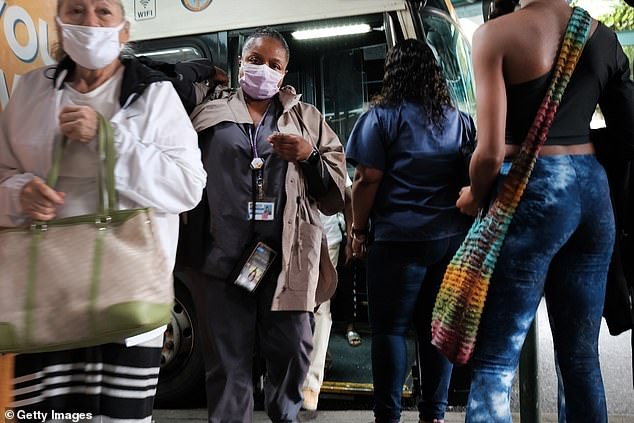 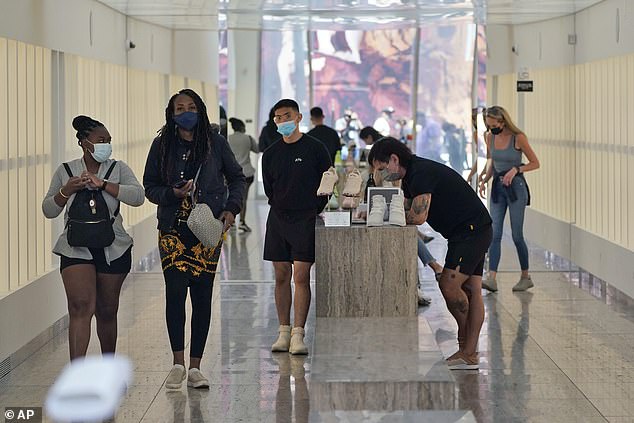 Workers and customers wear masks amid the COVID-19 pandemic inside a shoe store, in Los Angeles. Coronavirus cases have jumped 500% in Los Angeles County over the past month 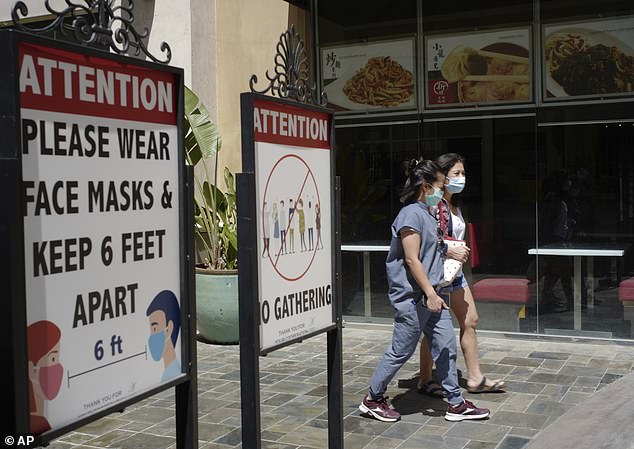 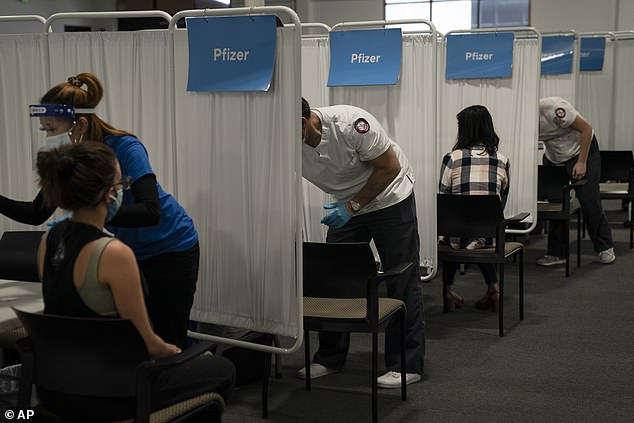 Student nurse Dario Gomez, center, disinfects a chair after administering the Pfizer COVID-19 vaccine to a patient in Santa Ana, California in May

Louisiana also has one of the nation’s lowest vaccination rates. State health officials said cases of the coronavirus are surging, largely among nonvaccinated people.

New Orleans officials said on Tuesday they are likely to extend virus-mitigation efforts currently in place at large sporting and entertainment gatherings until fall.

Those efforts include mask mandates or requirements that attendees be vaccinated or have a negative COVID-19 test.

In Louisiana, cases have increased by 115 percent from a seven-day rolling average of 389 per day on June 28 to 840 per day on July 12, according to Johns Hopkins data.

Just 35.8 percent of the state is fully vaccinated.

‘I do think we’re in it. We are seeing what is likely the beginning of increases,’ Dr Joe Kanter, Louisiana state health officer, told The Advocate.

But the political will may not be there in many states fatigued by months of restrictions.

In Michigan, Democratic Gov. Gretchen Whitmer is facing a drive to repeal a law that she used to set major restrictions during the early stages of the pandemic.

And Republican Gov. Kay Ivey of Alabama pushed back against the idea that the state might need to reimpose preventive measures as vaccinations lag and hospitalizations rise.

‘Alabama is OPEN for business. Vaccines are readily available, and I encourage folks to get one. The state of emergency and health orders have expired. We are moving forward,’ she said on social media. 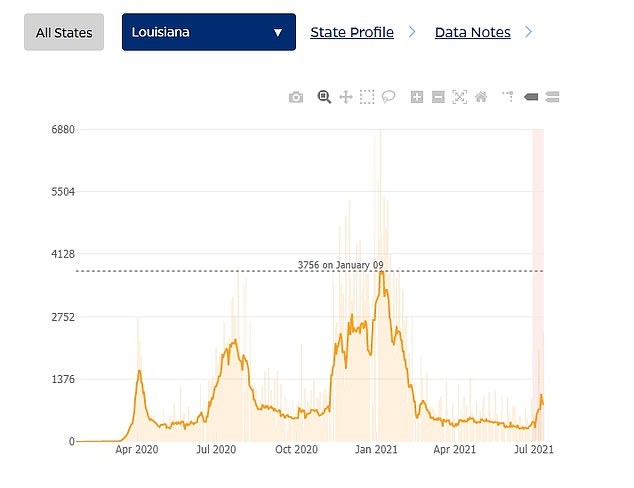 In many states cases have doubles such as Louisiana, where just 35.8% are fully vaccinated. Cases have increased by 115% from a seven-day rolling average of 389 per day on June 28 to 840 per day on July 12 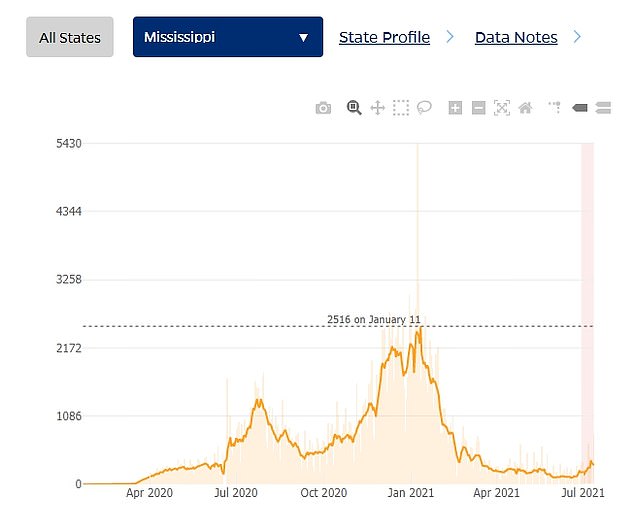 In Mississippi, with just 33.4% of residents fully vaccinated, COVID-19 infections have spiked by 57% from an average of 192 cases recorded on June 28 to an average of 303 per day on July 12

Dr. James Lawler, a leader of the Global Center for Health Security at the University of Nebraska Medical Center in Omaha, said bringing back masks and limiting gatherings would help.

But he acknowledged that most of the places seeing higher rates of the virus ‘are exactly the areas of the country that don’t want to do any of these things.’

Lawler warned that what is happening in Britain is a preview of what’s to come in the U.S.

‘The descriptions from regions of the world where the delta variant has taken hold and become the predominant virus are pictures of ICUs full of 30-year-olds. That’s what the critical care doctors describe and that’s what’s coming to the U.S.,’ he said.

He added: ‘I think people have no clue what’s about to hit us.’

President Joe Biden is putting a dose of star power behind the administration’s efforts to get young people vaccinated. Eighteen-year-old actress, singer and songwriter Olivia Rodrigo will meet with Biden and Dr. Anthony Fauci on Wednesday.

While the administration has had success vaccinating older Americans, young adults have shown less urgency to get the shots. CNN reported on Tuesday that just a quarter of children aged 12-15 have received the vaccine.

Some, at least, are heeding the call in Missouri after weeks of begging, said Erik Frederick, chief administrative officer of Mercy Hospital Springfield.

Frederick tweeted that the number of people getting immunized at its vaccine clinic has jumped from 150 to 250 daily, saying it gives him ‘hope.’

Scientists had warned about the rise of the Delta variant in February.

The B.1.526 variant, which first appeared in samples collected in New York City in November, made up about 27 percent of viral sequences deposited into a database shared by scientists called GISAID, The New York Times reported in February.

Biden in standoff with Democratic senators over who should lead FDA

England’s oldest pub will join 40,000 others in opening its doors tomorrow as restrictions are eased

Product Title: BeFinallyFit Click here to get BeFinallyFit at discounted price while it's still available... All...