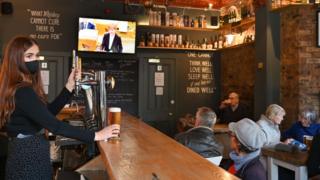 New coronavirus restrictions will “sound the death knell” for some of Scotland’s hospitality business, industry leaders have warned.

In central Scotland where the infection rate is highest, pubs and restaurants will close for more than two weeks.

Elsewhere, hospitality venues will have reduced opening hours and be barred from selling alcohol inside.

The Scottish government said businesses would receive an additional £40m of government support.

The new temporary measures come into force at 18:00 BST on Friday and are expected to last until 25 October.

Pubs and restaurants will be closed in five health board areas – Greater Glasgow and Clyde, Lanarkshire, Forth Valley, Lothian and Ayrshire and Arran – where about 3.4 million people live.

Elsewhere in Scotland, hospitality venues can open inside from 06:00 until 18:00 to sell soft drinks and food, and customers can be served alcohol in outside areas only until 22:00.

First Minister Nicola Sturgeon warned that without such measures, by the end of October infections could return to the levels seen early on in the pandemic in March, prompting a more intense lockdown.

She accepted the restrictions would be hard on businesses, especially as employers’ contributions to the furlough scheme have increased, but said £40m would be made available to support the sector.

Many businesses and industry leaders, however, reacted with dismay, complaining of a lack of consultation and claiming that hospitality was being unfairly singled out.

Liz Cameron, chief executive of the Scottish Chambers of Commerce, said: “These measures will sound the death knell for businesses across the hospitality sector, especially pubs and bars.

“Restaurants and hotels, whilst remaining open, will also be constrained on what they can provide and this will place a large dent in their already reduced income.”

She said redundancies could rise as a result of the measures.

There will be no travel ban in any of the areas, but people in the central belt have been urged to avoid public transport unless it is “absolutely necessary”.

And they have also been advised not to travel outside of the health board area they live in if they do not need to.

Rules for the rest of Scotland

Stephen Montgomery of the Scottish Hospitality Group, which represents several restaurant and bar groups, said: “The first minister has effectively signed a death sentence for many businesses across the Scottish hospitality industry.”

He added there would be a “catastrophic” economic cost.

Andrew McRae, of the Federation of Small Businesses in Scotland, said: “Without sufficient support from government, today’s moves could mean last orders for many independent pubs and restaurants.

“They’ll also cause a significant knock-on impact on our tourism sector, on our hospitality supply chain, and on those that operate in our night-time economy like taxi drivers and takeaways.”

One pub owner said he was struggling to reassure his staff.

Michael McHugh, who owns Alexander’s Bar in Clydebank, told the BBC: “I’m at the end of my tether now.

“I’m finding it harder and harder to continually support my staff and say ‘don’t worry your jobs are safe’… how can you run a business when every other week you’re getting shut down?”

Another restaurateur told the BBC it “was a bit gutting… but it is what it is”.

She said it was a shame for the staff who had only recently returned to work, to then have their shifts cut as a result of the curfew – only for the businesses to be shut down again.

Shops across Scotland will be asked to return to 2m physical distancing from this weekend, and to reintroduce measures such as one-way systems.

David Lonsdale, Scottish Retail Consortium director, said many businesses would be baffled at the request “in the absence of any evidence which shows shops are a source of infection”.

He added: “These additional restrictions may make it impractical for some to trade at all for this period, and the government must urgently provide details of the proposed support for these viable businesses.”

Many public health experts, however, backed the changes and said they were a necessary step.

“The accelerating number of cases in a number of NHS Boards demonstrates the need for immediate action to halt the spread we’ve seen in these areas over past few weeks, and the potential for further transmission across wider parts of Scotland.

“Taking action now to restrict the spread of Covid in our communities will save lives, help protect our NHS, and – as we begin to see a reduction in transmission – avoid the need for more extensive restrictions.”

Use the form below to send us your questions and we could be in touch.

In some cases your question will be published, displaying your name, age and location as you provide it, unless you state otherwise. Your contact details will never be published. Please ensure you have read the terms and conditions.

If you are reading this page on the BBC News app, you will need to visit the mobile version of the BBC website to submit your question on this topic.

What to wear this weekend: FEMAIL picks out the best quilted khaki coats for this season