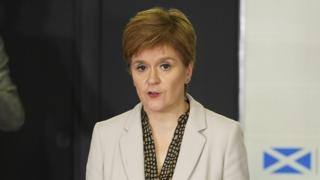 New coronavirus restrictions for Scotland will be announced on Wednesday – but it will not be another full lockdown, Nicola Sturgeon has said.

Options for a so-called “circuit-breaker” to slow the spread of the virus were discussed by the Scottish cabinet on Tuesday morning.

The first minister said people would not be told to stay at home, and there would be no national travel ban.

And schools will only close for the October holidays.

Ms Sturgeon was speaking as 800 new cases of Covid-19 were confirmed in Scotland.

The number of people in hospital with the virus rose by 44 overnight and now stands at 262, with 25 patients being treated in intensive care.

The virus is continuing to spread across Scotland, but particularly in central belt areas such as Greater Glasgow and Clyde, Lanarkshire, Lothian, Forth Valley and Ayrshire and Arran.

When new measures barring people from visiting each other inside their homes were imposed two weeks ago, an average of 285 new cases were being reported each day.

That figure now stands at 729 cases per day, which Ms Sturgeon said showed how the pandemic had “accelerated”.

The first minister said Scotland was facing “the most difficult decision point yet” if it wanted to suppress the virus ahead of winter.

She said the country was facing a “sharply rising rate of infection again”, with cases spreading from younger age groups into the older and more vulnerable population.

However she said the government needed to “strike a balance” between the public health toll and the wider costs of lockdown to the economy and people’s lives.

Some tourism and hospitality businesses have warned that they may never recover from the effects of any further restrictions.

Ms Sturgeon said the wider harms of lockdown “weigh very heavily” on her, and said she hoped the fact this was being “carefully considered” would reassure businesses.

‘No return to lockdown’

The first minister will set out new measures in the Scottish Parliament on Wednesday after further talks with ministers and advisors – but has stressed that “we are not going back to where we were in March”.

She said: “We are not proposing another lockdown at this stage, not even on a temporary basis.

“We are not going to ask you to stay inside your own homes the way we did in March.

“And while we have been asking people to think carefully about non-essential travel, and while restrictions on travel may sometimes be an option and necessary for hotspot areas, we are not about to impose restrictions on the whole of the country.

“We are not about the shut down the whole economy or halt the remobilisation of the NHS.

“And apart from the October holidays, we are not proposing to close schools even partially.”

Covid-19 deaths in England and Wales spike by 55% with 215 victims last week, ONS