Covid UK: Infection rate lower in 15% councils than BEFORE September

Fifteen per cent of all local authorities in the UK now have smaller coronavirus outbreaks than before the second wave spiralled out of control in September, MailOnline can reveal.

Department of Health figures showed 59 out of 380 councils across the country had a lower infection rate in the week ending February 16, the latest available, than in the seven-day spell to September 30.

Most of these areas are in the North of England and Wales which were recording more cases than the rest of the country in September, but two London boroughs — Islington and Tower Hamlets — are also included.

The sharpest dips in infection rates — the number of positive tests diagnosed in a week per 100,000 residents — compared to five months ago were in Newcastle-upon-Tyne, the city of Manchester and Derry in Northern Ireland. Rates dropped by 70 per cent in all three areas.

It comes after Boris Johnson defied huge pressure from Tories and business today as he unveiled an ultra-cautious ‘roadmap’ out of lockdown, with schools reopening in a fortnight but little else set to change for months.

Announcing his long-awaited four-phase exit strategy, the PM stated that ‘Covid zero’ was not possible, but made clear he was prioritising ‘certainty over urgency’ in loosening the shackles on the country.

He confirmed that all schools in England will reopen from March 8. But secondary pupils will need to wear masks in class for weeks after the move — and there are precious few other easings until Easter, with scientists seemingly having won the battle for a slow approach. The only other relaxation to come at the same time as schools return is permission to meet socially with one friend or family member in the park for a coffee or a picnic. 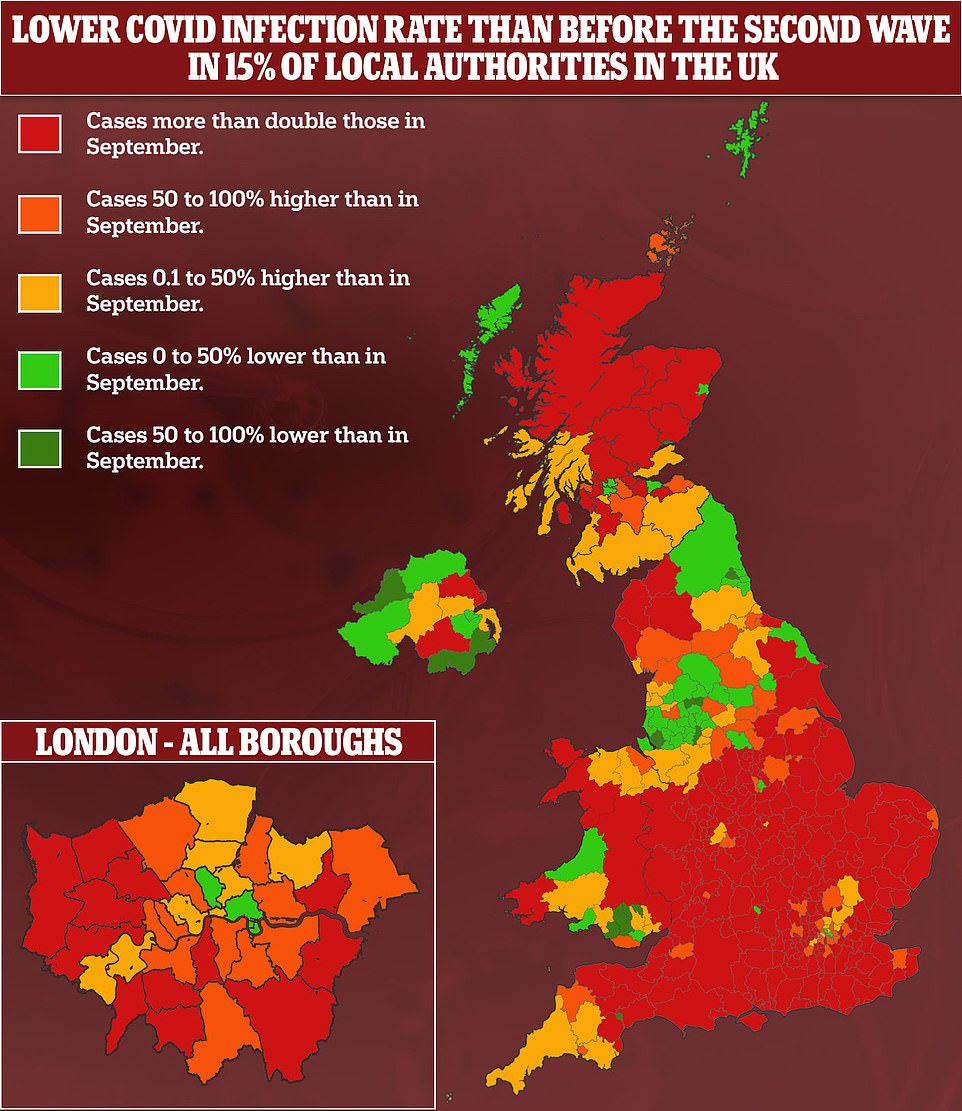 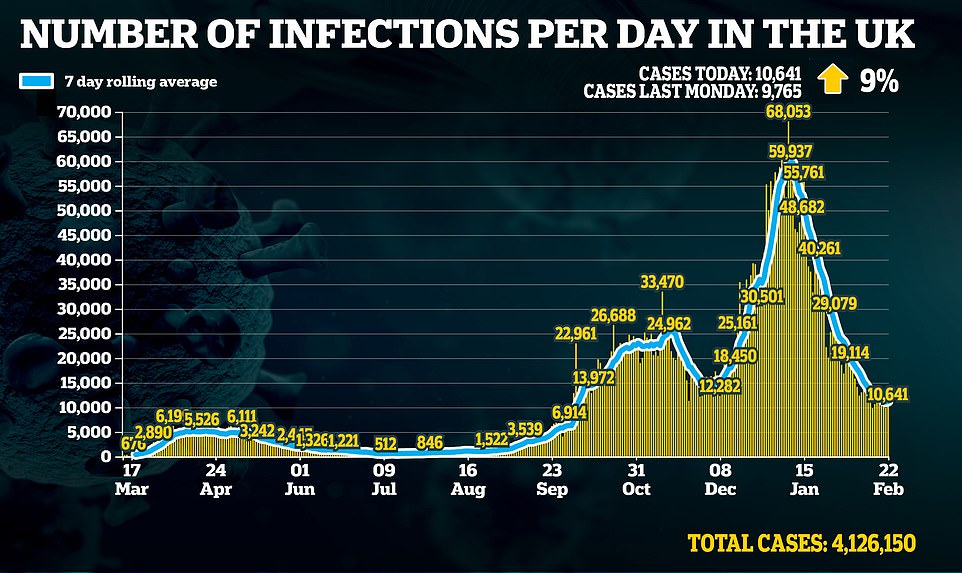 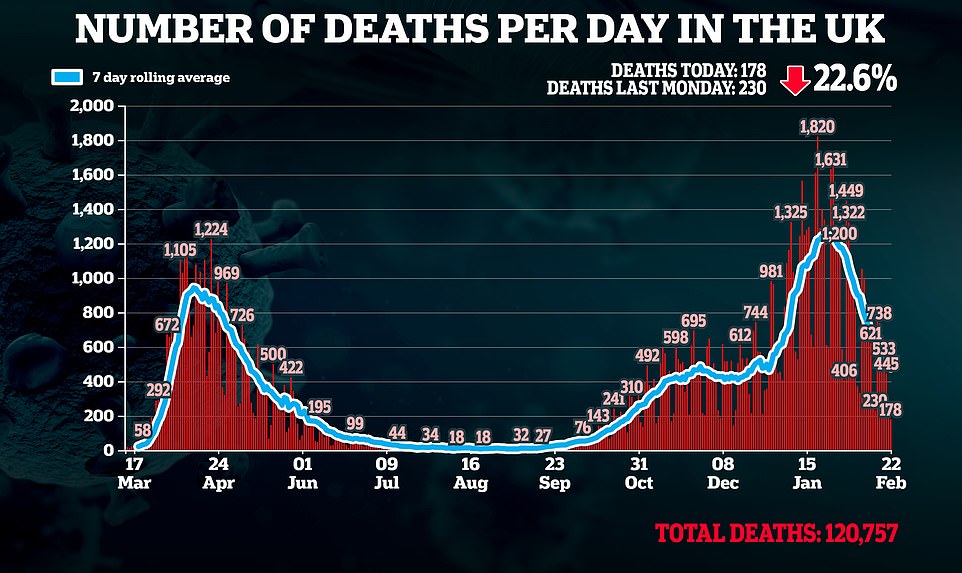 SECONDARY SCHOOL PUPILS TO WEAR MASKS IN CLASS FOR MONTHS

Secondary pupils will have to wear masks in the classroom ‘for several weeks’ to allow schools to safely reopen from March 8.

Prime Minister Boris Johnson outlined the new rules as he sets out his roadmap out of lockdown today.

He said there is a ‘greater requirement’ for masks in secondary schools for a ‘limited period’ until they are back up and running.

The PM revealed his ‘roadmap’ in a statement to the Commons this afternoon promising a ‘cautious but irreversible’ easing of lockdown and calling it ‘a one way road to freedom’.

The first steps to freedom will prioritise getting children fully back into classrooms in a fortnight’s time, while people will also be able meet one friend or family member in the park for a coffee or a picnic from March 8.

Mr Johnson tweeted this morning: ‘Our priority has always been getting children back into school which we know is crucial for their education and wellbeing. We’ll also be prioritising ways for people to reunite with loved ones safely.

‘Our decisions will be made on the latest data at every step, and we will be cautious about this approach so that we do not undo the progress we have achieved so far and the sacrifices each and every one of you has made to keep yourself and others safe.’

Department of Health statistics showed out of the top 10 regions with the biggest drops in infections compared to the end of September, four were in the North of England, three in Wales, two in Northern Ireland and one in the South of England.

Newcastle-upon-Tyne had the biggest fall in its infections, compared to September with cases down 82.8 per cent (626.4 cases per 100,000 residents in September, 107.3 in February).

Overall, of the top 10 regions with the biggest rises in infections compared to September, three were in the East of England, and two were in the South East and Scotland.

The two English regions faced major outbreaks due to the more infectious mutant Kent variant in October, pushing their infection rates much higher. They had escaped the virus relatively unscathed before this date.

Scientists say the mutant strain is also more deadly, and can lead to a higher number of Covid hospitalisations.

Scotland also faced a large outbreak of coronavirus in the run-up to Christmas compared to the month beforehand, which also sparked a national lockdown.

Stevenage, Hertfordshire, had an infection rate almost 15 times above levels it recorded in September (10.2 to 150.3).

Infections data only goes up to February 16 because of the lag between someone getting tested and receiving their results.

It also takes up to seven days for someone who has caught the virus to develop symptoms and book a swab, meaning the data only gives an indication of the spread of the virus on the ground a week earlier.

It comes after the Prime Minister set out his roadmap for exiting lockdown as he defied huge pressure from Tories and businesses over the ultra-cautious plan.

Announcing his long-awaited four-phase exit strategy, the PM warned the ‘threat remains’ and cases, hospitalisations and deaths will rise in the coming months as no vaccines can offer 100 per cent protection for the whole population.

‘At every stage our decisions will be led by data not dates,’ the premier told MPs.

Mr Johnson said there will be a five-week gap between the main steps in the roadmap, even longer than had been anticipated. He said it took four weeks to assess the impact of each step, and the country needed a week’s notice. Going any faster could mean having to reimpose the lockdown, he said. ‘I won’t take that risk,’ Mr Johnson said.

WHICH AREAS HAVE THE LOWEST INFECTION RATE COMPARED TO SEPTEMBER

WHICH AREAS HAVE THE HIGHEST INFECTION RATE COMPARED TO SEPTEMBER

He admitted that the surging vaccine drive had encouraged many to think it is possible to ‘go faster’.

‘I understand their frustration and I sympathise very much with the exhaustion and the stress that people are experiencing and businesses are experiencing… but to them I say the end really is in sight.’

The PM confirmed that all schools will reopen from March 8.

But secondary pupils will need to wear masks in class for ‘weeks’ after the move – and there are precious few other easings until Easter, with scientists seemingly having won the battle for a slow approach.

The only other relaxation to come with schools returning is permission to meet socially with one friend or family member in the park for a coffee or a picnic.

The next stage of loosening will not be until March 29, when the formal Stay at Home edict is finally dropped in favour of ‘Stay Local’, and the Rule of Six makes a comeback. It will be extended to allow two households to gather, enabling relatives to meet properly for the first time in months. 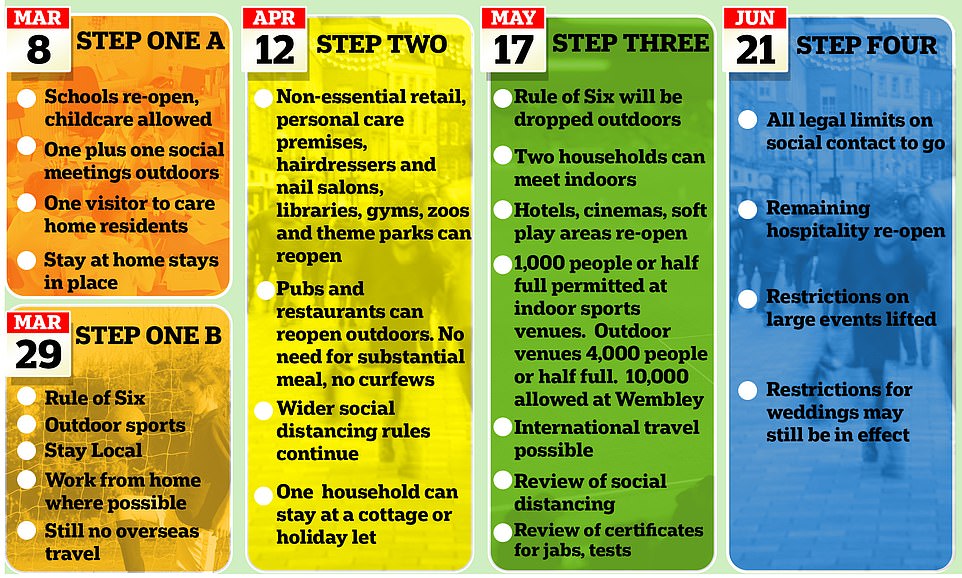 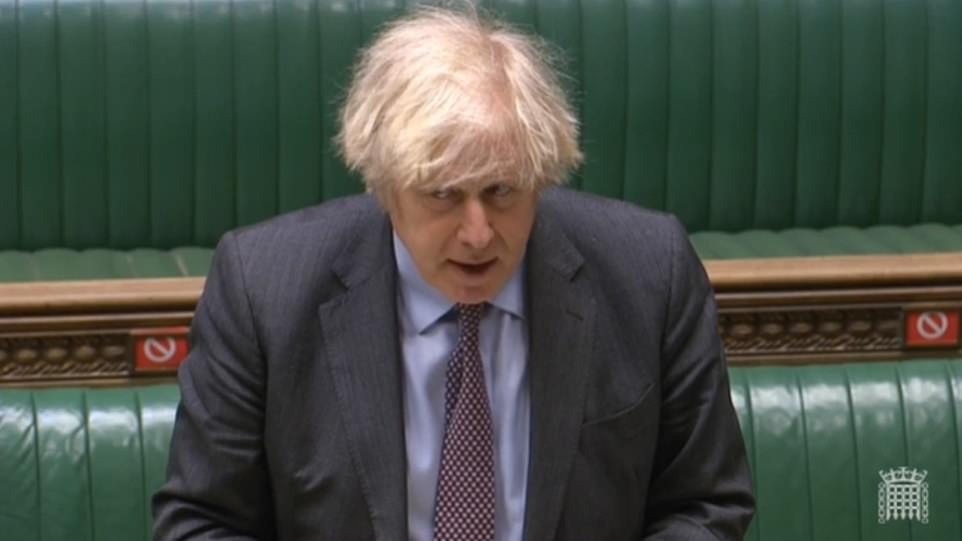 Announcing his long-awaited four-phase exit strategy, the PM warned the ‘threat remains’ and cases, hospitalisations and deaths will rise in the coming months as no vaccines can offer 100 per cent protection for the whole population

That date will also see the reopening of tennis courts and golf courses and the return of grassroots football.

But shops, hairdressers and pubs must remain closed until April 12 at the earliest – the same time gyms can get back up and running – regardless of mounting fears about the economic meltdown. Even at that point pints and meals can only be consumed outdoors.

Campsites and holiday lets can reopen for single households from April 12 – but international travel is completely off the cards until at least May 17.

And social distancing rules will stay in force until June 21 at the minimum, with a government review to decide their future after that. The decision means that grandparents face months of waiting before they can hug their grandchildren – even though millions have already been vaccinated.

Another review will be held at that point to decide whether a system of vaccine certificates could be deployed within the UK to help open up the economy, something the government has previously said it is not considering.

Sports can start to return from May 17, although venues will need to work on reduced capacities.

Up to 30 people can go to weddings from the same date, but are stuck at that number until the next phase of the roadmap.

Only at June 21 will all legal limits on social contact go, and the remaining elements of the hospitality sector be allowed to open. The PM stressed that he is being driven by ‘data not dates’ and the timeline is not guaranteed.

The power of interests