Figures from the state Health Department reveal only 70 percent have completed their vaccine series since the shots were rolled out in December 2020.

Of the five boroughs, Manhattan has the highest percentage of vaccinated workers with 76 percent having received their shots.

Queens has fared second best with more than two-thirds of health care workers, or 67 percent, being vaccinated.

However, almost 40 percent of hospital staff in the remaining three boroughs have either refused the COVID-19 vaccine or not gotten it yet.

Through July 14,  61 percent of workers have been vaccinated in the Bronx, 62 percent in Brooklyn (Kings County) and 64 percent in Staten Island (Richmond County).

Currently in New York City, at least 69 percent of cases of active COVID cases are of the highly contagious Delta variant. 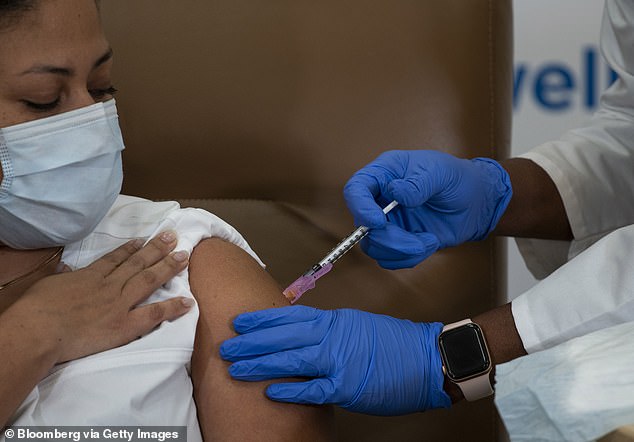 Only 70 percent of hospital workers in New York City are vaccinated, trailing the statewide rate of 74 percent 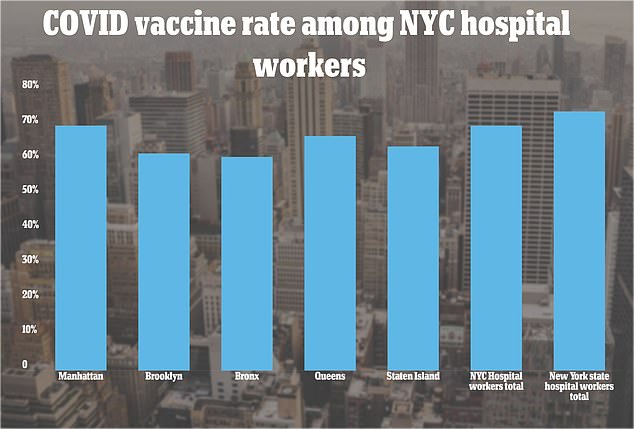 Manhattan has the highest vaccination rate at 76 percent among hospital workers. The Bronx has the lowest rate at only 61 percent.

Health care workers were among the first people to have the vaccine made available to them in the state back in December 2020.

Just one hospital in the state, NYPresbyterian-Health, has set a requirement for all employees to get vaccinated – giving them until September 1.

This means that health care workers in the state are meeting the city average, but falling behind the rest of the state.

Across the state, 74 percent of health care workers are vaccinated.

‘It is distressing that so many health care workers are not getting vaccinated,’ Richard Gottfried, Health Committee Chairman and representative of Manhattan in the state assembly, told the New York Post.

‘It’s important to protect themselves, to protect their patients, and to keep the health care system running. They should be setting an example for everyone.’

Hospital workers are at an increased risk of catching and transmitting COVID-19 due to their interactions with sick patients at hospitals.

Even when someone themselves does not work around COVID patients, they could still catch the virus from others around the hospital.

Because of this, it is key that health care workers get vaccinated, according to the Centers for Disease Control and Prevention (CDC), and is why they were given high priority in the vaccine rollout.

A surge in cases among health care workers can also reduce a hospitals ability to treat patients, exacerbating potential problems.

Because of this, multiple hospital systems around the country have instituted vaccine mandates, forcing all employees to get the jabs in order to keep their jobs.

NY-Presbyterian made the decision to set a September 1 deadline in June.

‘The stakes in this matter are high, and the evidence is clear that getting vaccinated against COVID-19 is the most important and responsible action we can take as NYP team members for the safety and well-being of our patients and visitors, our communities, and ourselves,’ hospital leadership wrote in a memo to staff obtained by Gothamist. 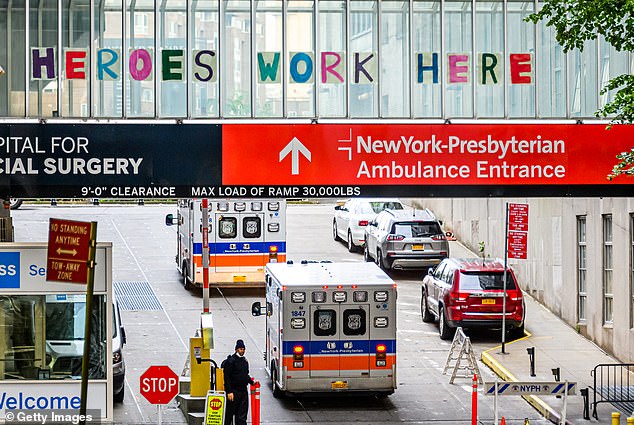 NewYork-Presbyterian hospital is the only one of the cities 11 hospitals to have set a vaccine mandate, giving employees until September 1 to get the shots

The hospital, like many others, already requires employees to get vaccinated against the flu, measles, rubella and varicella.

Other hospital systems around the country have put similar mandates in place, but not without backlash.

In Houston, Houston Methodist hospital was sued by over 100 employees after setting an early June deadline for employees to get vaccinated.

The lawsuit was thrown out, as the Equal Employment Opportunity Commission previously ruled that employers were allowed to set these types of mandates.

1199SEIU, the largest health care union in the nation representing over 450,000 members, has vowed to opposed these types of measures.

‘We are not in agreement with a mandate of the COVID-19 vaccine,’ George Gresham, president of 1199SEIU, said in a statement earlier this month.

‘A hard-handed approach will not work and will only create greater frustration for the healthcare heroes who have been battling this pandemic every day for the last 15 months.

Britney Spears is spotted with an engagement ring on her finger

Prince Philip tributes: ‘I wanted my grandchildren to remember this day’

The glamorous designer of Meghan Markle's £56,000 engagement dress has accused her former business partner and...