Offenders will no longer get special treatment if they are EU nationals.

However, the measures will partly rely on Britain retaining access to European criminal databases, on which a deal has yet to be reached.

Existing EU rules mean Britain can only prevent EU criminals entering if they present a serious and current threat.

The new measures will lower that hurdle. In one of the most significant outcomes of Brexit, the Home Secretary will be able to prevent anyone handed 12 months or more in jail from entering.

The measures, to be introduced in Parliament today, do not apply to the four million who have registered under the EU Settlement Scheme.

They will be able to come and go as they please. 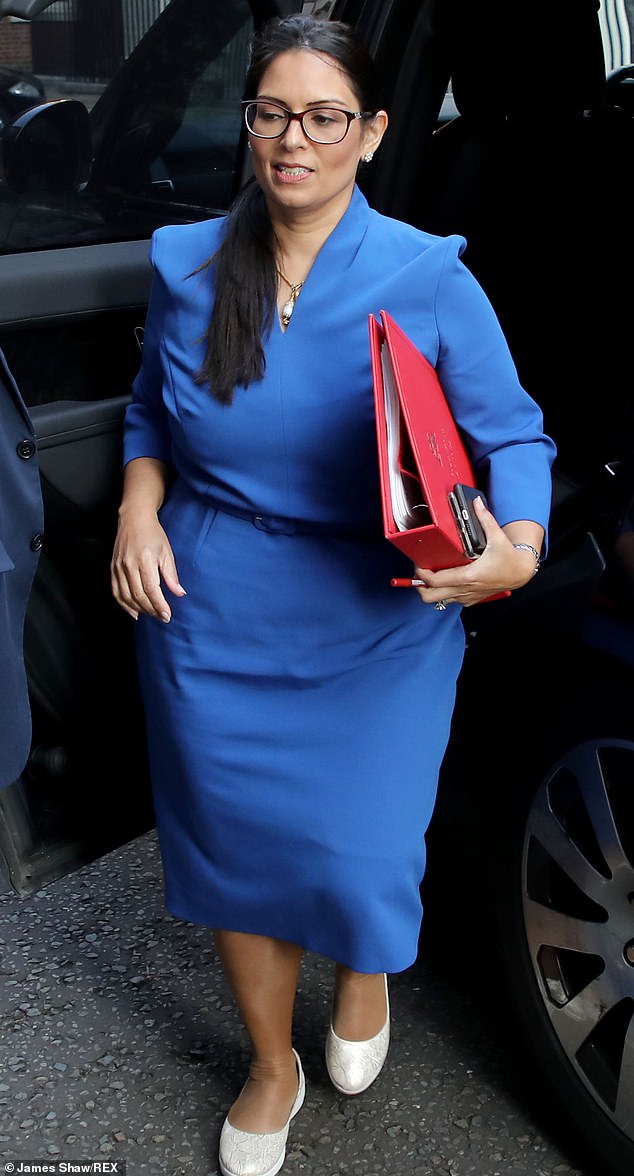 In addition, the regulations will allow the Home Office to remove EU nationals who sleep rough in this country and who refuse help, or who commit crimes such as aggressive begging.

It means the Home Office will have new powers to deal with EU nationals who set up ‘tent cities’ in London’s Park Lane and at other locations across the country.

It is understood the powers will be used ‘very sparingly and only as a last resort’ against homeless foreign nationals who commit anti-social behaviour or low-level crime which may not meet the normal criteria for deportation.

Miss Patel said: ‘For too long, EU rules have forced us to allow dangerous foreign criminals, who abuse our values and threaten our way of life, onto our streets.

‘The UK will be safer thanks to firmer and fairer border controls where foreign criminals regardless of nationality will be subject to the same criminality rules.’

The changes mean that foreign criminals sentenced to more than a year in jail will be banned from entering the UK, compared with current EU rules which set out a cut-off of a recent jail spell of more than four years.

The Home Secretary will also be able to refuse entry to foreign criminals sentenced to less than a year in jail on a case-by-case basis.

And offenders who have not received a prison sentence could also be banned if, for example, they have been persistent criminals; their offending risks causing ‘serious harm’, such as sex offenders; or their presence here is ‘not conducive to the public good’.

Currently, EU rules mean criminals can only be barred if they present a ‘genuine, present and sufficiently serious threat affecting one of the fundamental interests of society’, meaning older offences cannot be taken into account.

For example, an EU national jailed for rape a decade ago cannot currently be refused entry if they have not re-offended since. Under the new rules, that rapist could be banned from Britain. 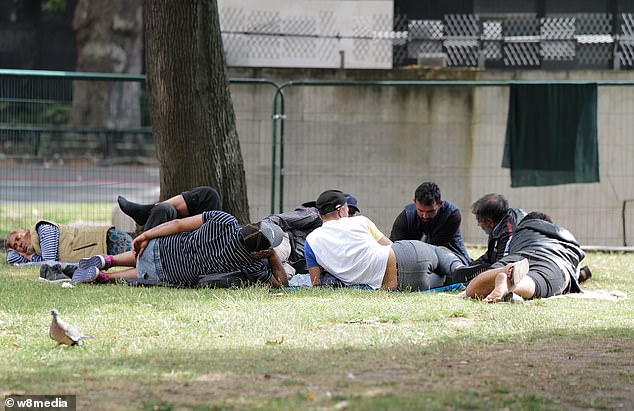 The regulations will allow the Home Office to remove EU nationals who sleep rough in this country and who refuse help, or who commit crimes such as aggressive begging (pictured: groups in London’s Park Lane) 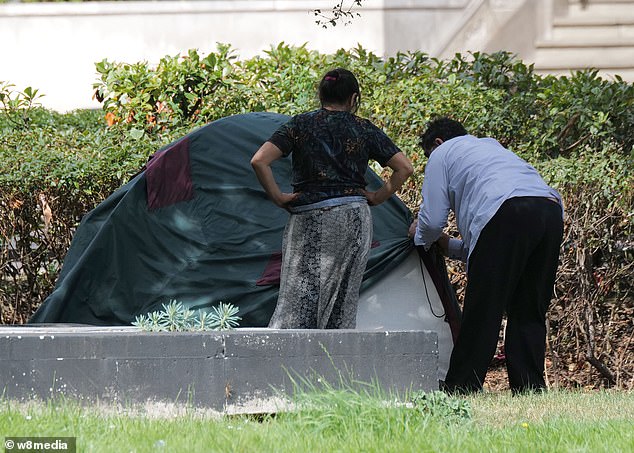 It means the Home Office will have new powers to deal with EU nationals who set up ‘tent cities’ in London’s Park Lane, pictured, and at other locations across the country 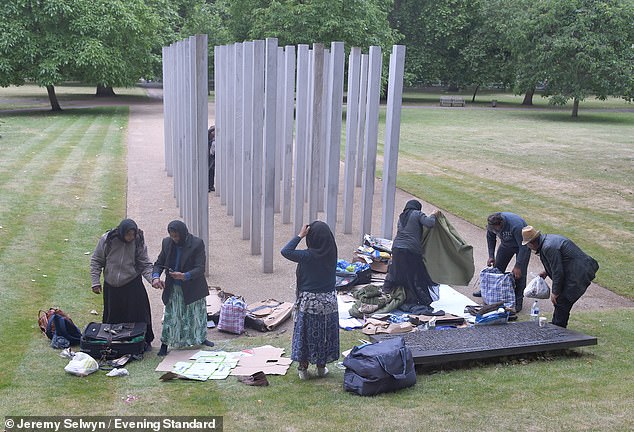 Romanian gypsies at their camp at the 7/7 memorial in Hyde Park, where they used the plaque as a dinner table

The Home Office will be able to take all offences into account whether committed in the UK or overseas. Anyone involved in sham marriages will also be refused entry.

Officials acknowledged there will be ‘some limited exceptions’, however.

For example, an EU citizen could bring a claim under the European Convention on Human Rights, potentially delaying their removal.

EU citizens already living in Britain who have signed up to retain their current status under the EU Settlement Scheme will not be affected by the new measures. This will include rough-sleepers.

However, if they commit a crime from January 1 which results in a jail sentence of a year or more their status could be revoked.

If Britain loses access to European criminal records databases the new powers will be difficult to enforce because it will make it harder to identify offenders who arrive at the UK border.

But a Home Office source said last night they were confident they would be able to use other databases, such as those run by Interpol.