He has only played one match in Euro 2020 and has already collected another two moments of history.

His first came by just stepping on the pitch against Hungary on Tuesday as he became the first player to appear at five men’s European Championships.

We had to wait a while for his second moment as he looked to become the tournament’s record goalscorer.

He blazed over from six yards out in the first half, but was not to be denied as he converted an 87th-minute penalty to overtake Michel Platini’s mark of nine European Championship goals.

But the 36-year-old Juventus superstar, who helped Portugal win Euro 2016, was not done yet as he went around goalkeeper Peter Gulacsi in injury time for his 11th goal at a Euros to seal Portugal’s 3-0 victory. 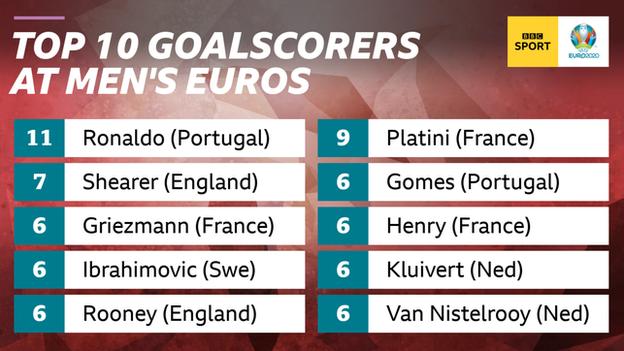 “Ronaldo is such an inspirational player, he’s the player who lifts the team,” said former England striker Chris Sutton on BBC Radio 5 Live.

“He missed that great chance but you cannot keep that man down. Genius.

“He keeps going, and you knew he would score the penalty. He always has a say in games, he is capable of anything, a creator of huge moments, a record breaker.

“To stay motivated at his age is so special. Ronaldo walks on water, doesn’t he?”

Well, no, but he may well get another record before this tournament is over. And this would be something special.

His double against Hungary, in front of more than 60,000 fans at the Puskas Arena in Budapest, took Ronaldo to 106 international goals.

Only Iran’s Ali Daei, with 109 goals, has more for his country so Ronaldo needs three to match that and four to beat it. Will he do it in this tournament? You would not bet against it.

World champions France and former winners Germany are the other two teams in Group F, with Hungary seen as having no chance of advancing, but BBC Radio 5 Live’s Ian Dennis felt they could be proud of their effort.

“This was more that just a game, this was their biggest crowd for a football match for 35 years, it was about national pride,” said Dennis.

“It was a cauldron of noise and helped the host nation. Hungary were declared as the whipping boys and were holding the champions. For so long Hungary were going toe-to-toe with Portugal.”

In these coronavirus days, it has been a long time since we saw a packed stadium.

BBC World Service’s John Bennett was there and said: “Being in a full stadium again for the first time in 16 months was a surreal experience.

“I didn’t get into the ground until just before kick off and it was an attack on the senses when I walked to my seat in the top tier and was greeted by a wall of red and deafening noise. The modern Puskas Arena is like a cauldron and the acoustics are as good as any ground I’ve been to around the world.

“When the Hungarian fans whistled Cristiano Ronaldo, the sound was intense and the regular thunder clap (probably copied from the Iceland fans) was a sight and a sound to behold.

“It may be a major tournament but the Hungarian Ultras, the Carpathian Brigade, were in the same block of seats behind one of the goals and were leading the chanting, with a small pocket of Portuguese fans doing their best to be heard, led by an enthusiastic drummer.

“The three goals in the final six minutes cut the noise instantly but the fans showed their appreciation for the Hungary team at the final whistle after they came so close to a point that would’ve felt like a win.

“The 100% attendance at this stadium is hugely controversial but putting that to one side, the pure experience of being in a packed house again was joyous and a reminder that without the fans, football feels a completely different sport.”

Mom accused of murdering daughter, 4, by forcing her to stand for three days straight