Cruise ship evacuation from St. Vincent volcano is for vaccinated people only


The La Soufriere volcano in St Vincent fired an enormous amount of ash and hot gas early Monday just a day after the nation’s prime minister said that cruise ships would only evacuate people who are vaccinated.

Experts called it a ‘huge explosion’ that generated pyroclastic flows down the volcano´s south and southwest flanks.

‘It’s destroying everything in its path,’ Erouscilla Joseph, director of the University of the West Indies’ Seismic Research Center, told The Associated Press. ‘Anybody who would have not heeded the evacuation, they need to get out immediately.’

Roughly 16,000 people who live in communities close to the volcano had been evacuated under government orders on Thursday, but an unknown number have remained behind and refused to move.

At least four empty cruise ships floated nearby, waiting to take evacuees to other islands who have agreed to temporarily receive them, including Antigua and Grenada.

But Prime Minister Ralph Gonsalves said people have to be vaccinated before they board the ships.

‘The chief medical officer would be identifying the persons already vaccinated so that we can get them on the ship,’ he said. 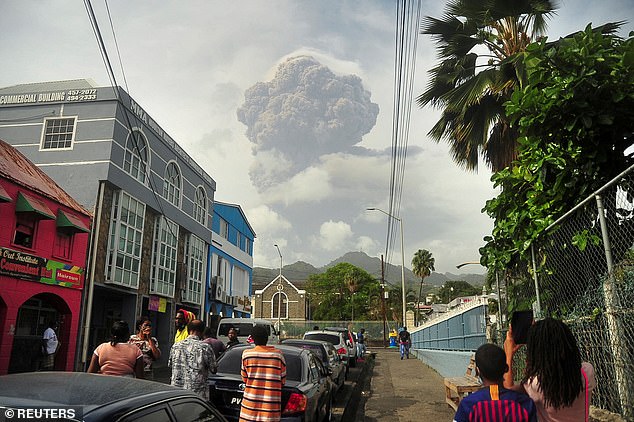 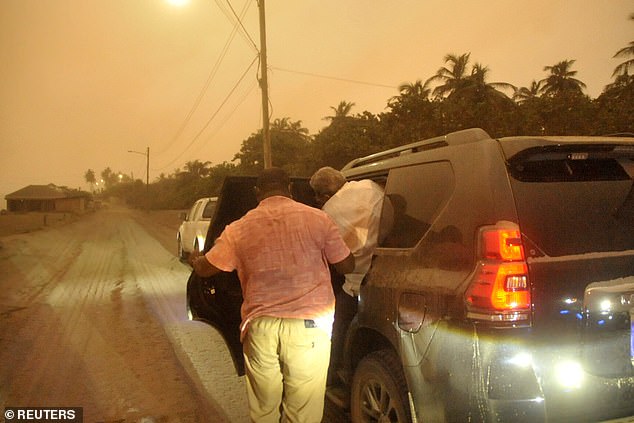 At least four empty cruise ships waited to take evacuees to other islands who have agreed to temporarily receive them, including Antigua and Grenada. But Prime Minister Ralph Gonsalves (pictured getting into a vehicle) said people have to be vaccinated before they board the ships 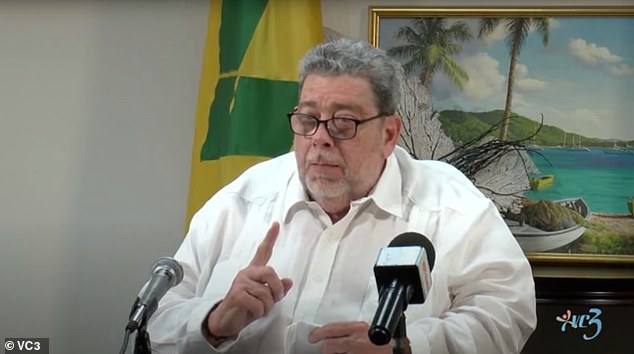 Gonsalves said he expects his administration might call off the cruise ships since the vast majority of people seem to be staying in St Vincent for now.

There were no immediate reports of injuries or death, but government officials were scrambling to respond to the latest eruption, which was even bigger than the first eruption that occurred Friday morning..

Richard Robertson, with the seismic research center, told local station NBC Radio that the volcano’s old and new dome have been destroyed and that a new crater has been created.

He said that the pyroclastic flows would have razed everything in their way.

‘Anything that was there, man, animal, anything…they are gone,’ he said. ‘And it’s a terrible thing to say it.’

Joseph said the latest explosion is equivalent to the one that occurred in 1902 and killed some 1,600.

The volcano last erupted in 1979. Ash from the ongoing explosions has fallen on Barbados and other nearby islands.

One government minister who toured the island´s northeast region on Sunday said he saw an estimated two or three dozen people still remaining in the community of Sandy Bay alone, prompting Gonsalves to urge people to leave.

The ongoing volcanic activity has threatened water and food supplies, with the government forced to drill for fresh water and distribute it via trucks. 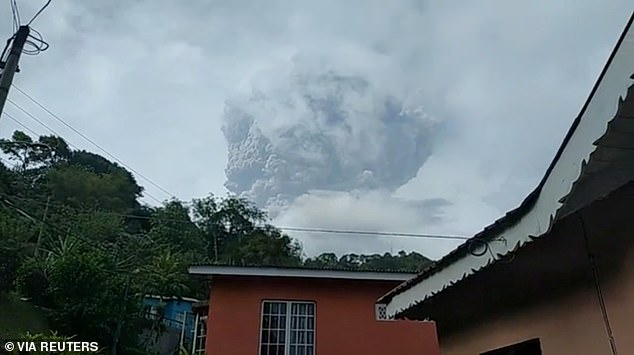 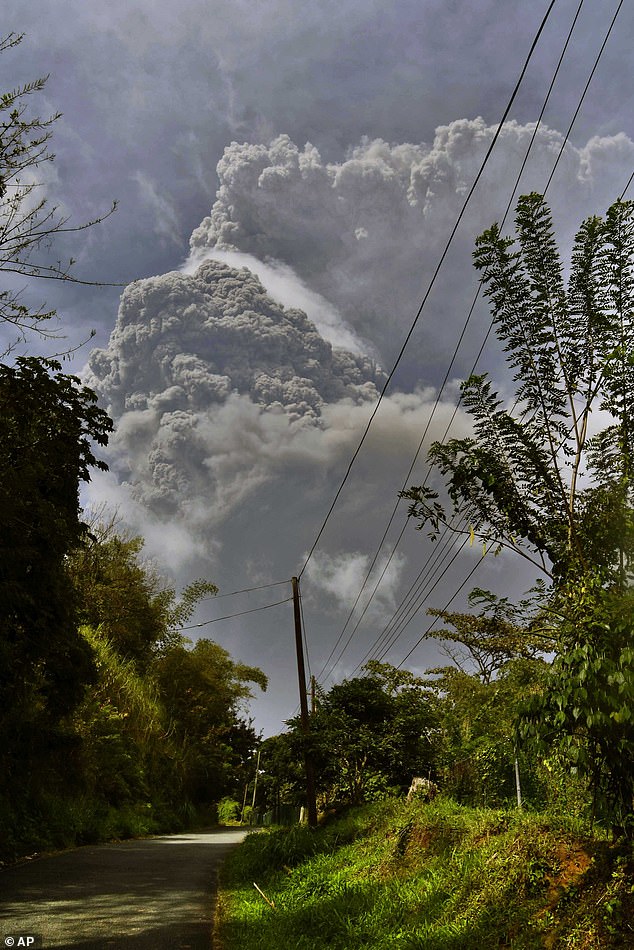 Plumes of ash rise from the La Soufriere volcano as it erupts on the eastern Caribbean island of St Vincent, as seen from Chateaubelair 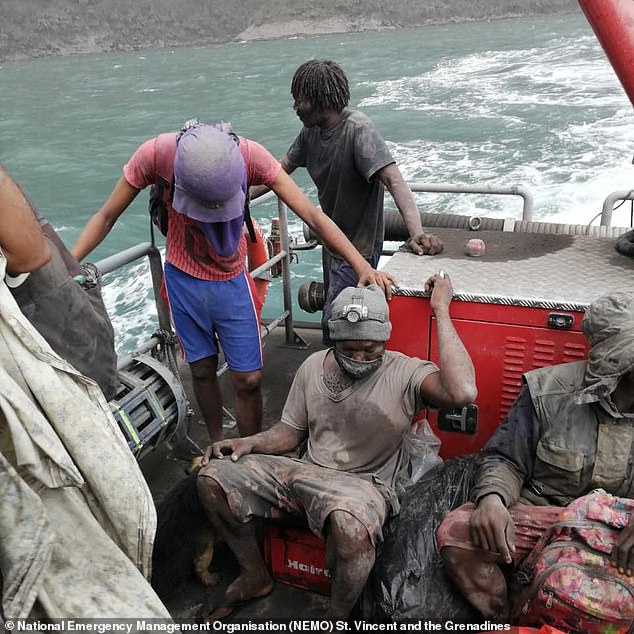 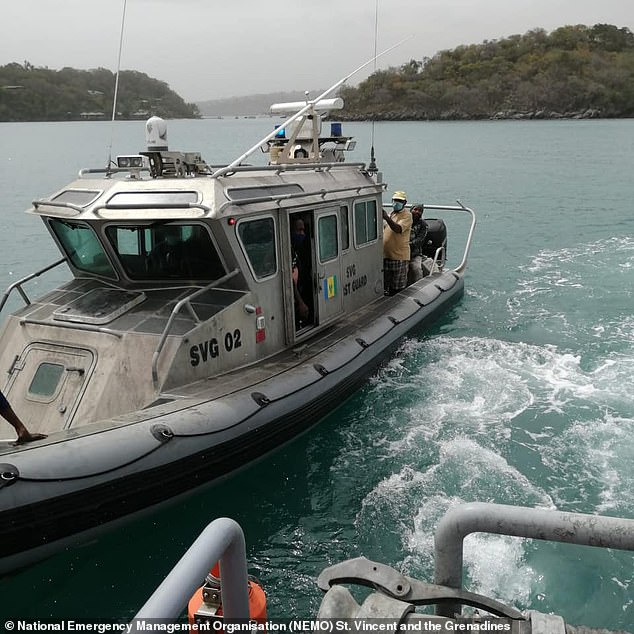 The local Coastguard complete yet another rescue mission in St Vincent. The evacuees disembarked at Coastguard base at Calliaqua and will be on their way to various evacuation centers in the safe areas

‘We cannot put tarpaulin over a river,’ said Garth Saunders, minister of the island´s water and sewer authority, referring to the impossibility of trying to protect current water sources from ongoing falling ash.

He told NBC Radio that officials also are trying to set up water distribution points.

Deputy Prime Minister Montgomery Daniel told the radio station that the damage was extensive in the island´s northeast region, which he toured on Sunday.

Forests and farms were wiped out, with coconut, breadfruit, mango and soursop trees destroyed, as well as plantain and banana crops.

‘What I saw was indeed terrible,’ he said.

Cots, tents, water tanks and other basic supplies were flooding into St Vincent as nearby nations rushed to help those affected by the eruptions.

He told NBC Radio on Sunday that his government will do everything possible to help those forced to abandon their homes in ash-filled communities.

‘It’s a huge operation that is facing us,’ he said. ‘It’s going to be costly, but I don´t want us to penny pinch…this is going to be a long haul.’ 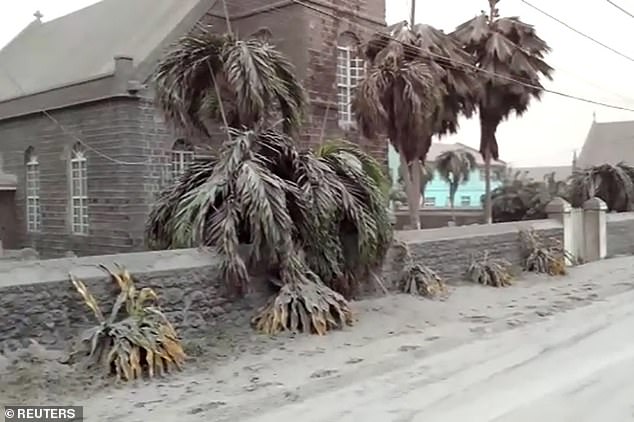 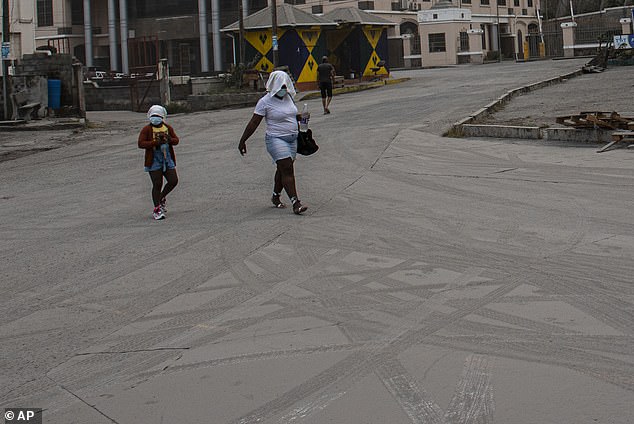 Gonsalves said it could take four months for life to go back to normal in St Vincent, part of an island chain of that includes the Grenadines. The majority of the 100,000 inhabitants live in St Vincent.

The pandemic also is complicating response efforts. At least 14 new cases of COVID-19 have been reported since the eruptions began on Friday, and all those going to shelters are being tested.

Those who test positive are taken to isolation centers. More than 3,700 people are in 84 government shelters.

The eastern Caribbean has 19 live volcanoes, 17 of those located on 11 islands. The remaining two are located underwater near Grenada, including one called Kick ‘Em Jenny that has been active in recent years.

The most active volcano of all is Soufriere Hills in Montserrat, which has erupted continuously since 1995, destroying the capital of Plymouth and killing at least 19 people in 1997.