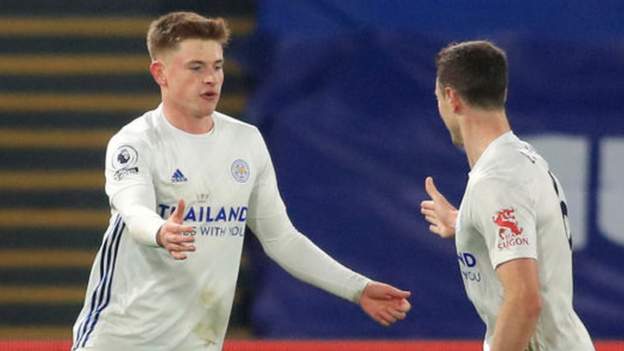 Harvey Barnes cancelled out Wilfried Zaha’s opener as in-form Leicester were held to a draw by Crystal Palace at Selhurst Park.

Barnes’ low strike into the corner salvaged a point for Brendan Rodgers’ much-changed side, who climb to second in the Premier League table.

Kelechi Iheanacho spurned a golden opportunity to give the visitors a first-half lead when his penalty was saved by Vicente Guaita.

The Nigerian’s miss looked like it might prove costly when Zaha finished superbly from Andros Townsend’s cross, but Barnes’ second goal in as many games rescued a draw for the Foxes.

Leicester, who made seven alterations to the team that drew with Manchester United on Boxing Day, dominated possession but failed to test Guaita from open play until Barnes’ late strike.

The visitors’ only other effort on target was from Ayoze Perez, whose first-half free-kick was easily held by the Spanish goalkeeper.

The point lifts Palace above Newcastle into 13th place, eight points clear of the bottom three.

A step in the right direction for Palace

Having watched his side lose to 10-man Aston Villa 48 hours previously, Hodgson may have welcomed the quick turnaround as an opportunity to make amends for that painful defeat at Villa Park.

The hosts were second best for much of the first half but should have taken the lead after Guaita had denied Iheanacho from the spot.

Former Foxes player Jeffrey Schlupp – making his 100th Premier League appearance for the Eagles – teed up Townsend on the edge of the six-yard box but the winger could only scuff his effort wide.

As has so often been the case this season, it was Zaha who provided the spark of inspiration for Palace.

The 28-year-old connected superbly with Townsend’s in-swinging cross to power an unstoppable volley past Kasper Schmeichel for his eighth league goal of the season.

Hodgson will be frustrated at his team’s inability to hold on to their slender lead, but following recent heavy defeats against Liverpool and Villa, this was certainly a step in the right direction for the Eagles.

Life after Brexit: What will change for people in 2021 when the UK is free of EU rules?

Life after Brexit: What will change for people in 2021 when the UK is free of EU rules?