The 10pm curfew seems ridiculous – it’s not as if the virus has a watch and only transmits at certain times, is it?

A new 10pm curfew for pubs, bars and restaurants was introduced last week in England, Wales and Scotland as part of a package of new Covid-19 regulations.

The hope is that the measure will help reduce social contact between people and slow the spread of the virus.

But as pictures have surfaced of large groups spilling out on to streets at 10pm – and crowding on to public transport – experts have questioned the logic.

Some have rightly pointed out that the virus can spread at any time, day or night. Others have warned that drinkers will go out earlier, or head back to friends’ houses after closing time, where they are less likely to abide by social distancing. 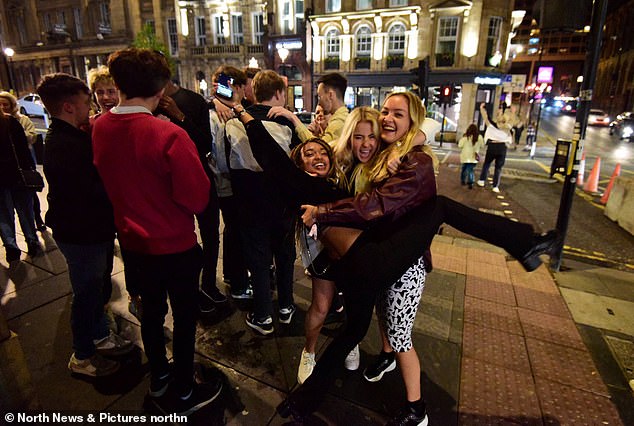 A new 10pm curfew for pubs, bars and restaurants was introduced last week in England, Wales and Scotland as part of a package of new Covid-19 regulations

Dr Stephen Griffin, associate professor in the school of medicine at the University of Leeds, is not convinced the curfew will be effective.

He said: ‘It runs the risk of compressing activity and having people leave at a single time in large numbers.’

‘The more drunk you are, the less inhibited and less risk-averse you are,’ she says.

‘It gives them plenty of time for a meal, or a quick drink with friends after work, but means they are likely to be sober enough to remember to put on a face covering on the train or bus home, and to be careful around elderly relatives when they get home’.

Did the local lockdowns work? The new national measures seem to mimic those in areas with fast-rising cases like the North West.

Although the UK avoided a national lockdown in the summer, smaller areas have been subject to stricter rules.

Data from Leicester and Greater Manchester – where local rules were imposed – give some idea of whether these restrictions worked.

From the end of June, Leicester residents from more than one household could not gather indoors, and shops, pubs and restaurants remained closed. Cases fell between June and July from 140 per 100,000 people to just 50 – and continued to fall even as pubs, restaurants, gyms and beauticians were gradually reopened throughout August.

However, they have risen again in recent weeks, in line with the rest of the country.

In Oldham, Greater Manchester, cases initially dropped from about 100 per 100,000 to 60. But they have also since risen again.

Experts say it is too early to tell if the curfews applied almost two weeks ago to parts of the North East have had an effect on the number of cases and spread of infection.

Overall, it seems that local lockdowns did help slow the rate of infection.

Paul Hunter, professor of medicine at the University of East Anglia, says: ‘The problem is you can never really be 100 per cent sure that something you have introduced has slowed cases, or caused a decline.

‘But I think without doing anything, cases in Oldham would have accelerated more rapidly.’

He added that problems with the NHS test and trace service could have limited the effectiveness of the measures. 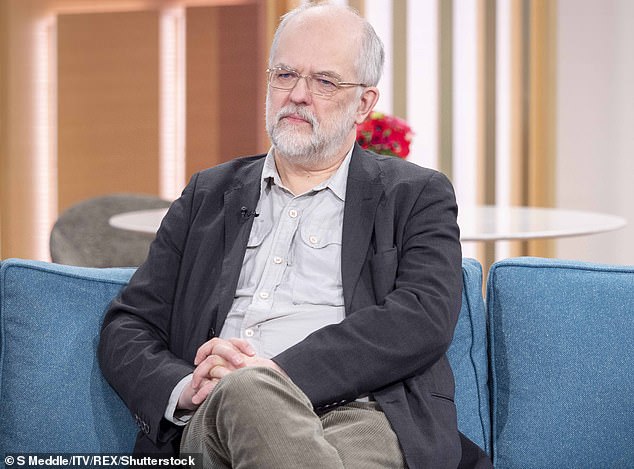 Paul Hunter, professor of medicine at the University of East Anglia, says: ‘The problem is you can never really be 100 per cent sure that something you have introduced has slowed cases, or caused a decline’

Why are our borders still open?

At this stage of the pandemic, closing borders would have only a limited impact on the UK’s case numbers.

In February and March, there was significant debate about whether to halt international travel, and evidence has since suggested that the majority of UK cases were brought in from Europe – mainly Spain and France.

Perhaps then, before cases were widespread, closing the borders could have changed the course of the pandemic.

But the UK is in a very different position now, with the virus well-established across the country.

‘If we banned international travel today, it probably wouldn’t have any dramatic discernible effect,’ says Professor Hunter. ‘Yes, it would stop new cases coming into the country. But cases are accelerating anyway.

‘Once you have got a disease circulating in a country, banning international travel basically doesn’t do much.’

So, is this the second wave of Covid-19 or not?

There’s no doubt that the UK is seeing a steep rise in the number of people testing positive for Covid-19.

In recent weeks, the numbers have started to climb rapidly. The fear – as outlined in a public broadcast last week by Sir Patrick Vallance, the Government’s Chief Scientific Adviser, and Professor Chris Whitty, Chief Medical Officer for England – is that these cases will grow uncontrollably. This is likely to have an effect on hospital admissions, which are already starting to creep up, and deaths. The number of Britons in hospital with the virus has risen by more than 50 per cent since last week.

In their address, Sir Patrick and Prof Whitty warned that the number of people infected could double every seven days, leading to as many as 50,000 cases per day by mid-October. But some experts say this prediction is implausibly quick.

In the meantime, Imperial College London data suggests a doubling of infections every seven to eight days. This was based on 136 positive tests from 150,000 swabs between August 22 and September 7.

Critics say this is too low a number of positive tests to reliably compute trends – and that it may not reflect the current picture.

‘Some people say it’s not a second wave, because actually, the first wave never went away,’ says Paul Hunter, professor of medicine at the University of East Anglia. ‘The fact is, we are seeing a major resurgence of the infection, and whether it’s part of the first wave or second – those are purely words.’

It’s important to remember, though, that we are not in the same place as we were in the spring. At the peak of the pandemic, the Government reported there were more than 6,000 daily infections, but the true number is estimated to have been much higher.

Experts at the London School of Hygiene and Tropical Medicine say it may even have topped 100,000 in March. Back then, only some people with symptoms – mainly those in hospitals – were being tested.

So while the two ‘waves’ may appear alarmingly similar on a graph, it’s not accurate to compare them at all. The rise in cases now is an early warning – one which we did not have the benefit of at the start of the year – that the virus is spreading. And it gives the Government, and population, time to act.

Prof Hunter says new measures introduced last week should help slow the rise in infections, and stop cases rising so steeply. But he adds: ‘I personally doubt that they will, by themselves, reverse the epidemic this side of Christmas.’ 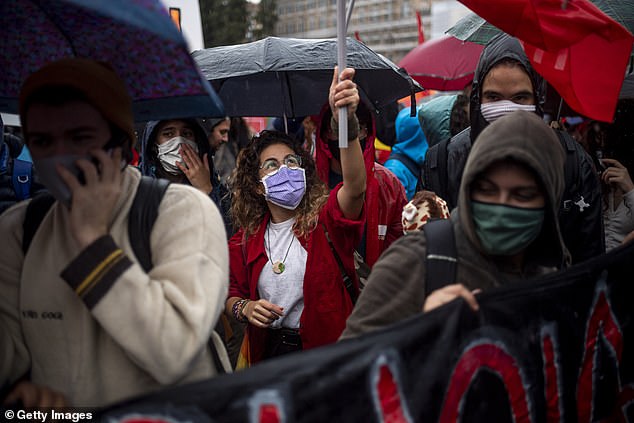 Cases of Covid have risen steeply in France and Spain but Italy, pictured, which was hit harder than most European countries in March, appears to have things under control

France and Spain are seeing a second wave – why isn’t Italy too?

Cases of Covid-19 have risen steeply in France and Spain, with both reporting more than 10,000 new infections a day. Meanwhile Italy, which was hit harder than most European countries in March, appears to have things under control.

While the number of infections there has been creeping up, levels have remained fairly consistent over the past month, and not topped 2,000. It is faring better than the UK too.

Last week, Boris Johnson suggested the difference was because Britain was ‘a freedom-loving country’. But Italy’s President Sergio Mattarella hit back, saying Italians ‘love freedom, but we also care about seriousness’.

Exactly why France, Spain and the UK are faring so differently to Italy is not clear. But experts say it could be that Italian rules on mask-wearing in public are strictly adhered to and enforced by police and officials.

The country is also offering rapid Covid-19 tests at some airports. And although they are less accurate than the one used in the UK, they can provide a result in 30 minutes.

Italy’s test and trace system is also thought to be working well. However, it is too soon to suggest that the country will escape unscathed this time.

Has the virus mutated, making it more – or less – dangerous now?

Every time a virus infects a person, it makes new copies of itself to attack other cells, and during this process mistakes can be made that result in changes.

In fact, most of the time, mutations don’t make much difference to how the virus behaves. Sir Patrick said the virus that causes Covid-19 had ‘genetically moved a bit’ but stressed this had not changed its ability to infect people or cause disease and death.

Why has the US stock market soared while the UK has fallen behind?