Customers are cancelling insurance they can no longer afford

Rising costs are leading to millions of customers cancelling vital insurance policies they can no longer afford, leaving them financially vulnerable if things go wrong.

A survey by finance provider Premium Credit has found that 38 per cent of people have cancelled one or more insurance policy over the past three years because they could no longer afford it.

This includes car insurance – a legal requirement if you own and drive a car – and home insurance, which your mortgage lender will likely require you to have.

Worryingly, in some 56 per cent of these cases, cancellations occurred in the past 12 months. 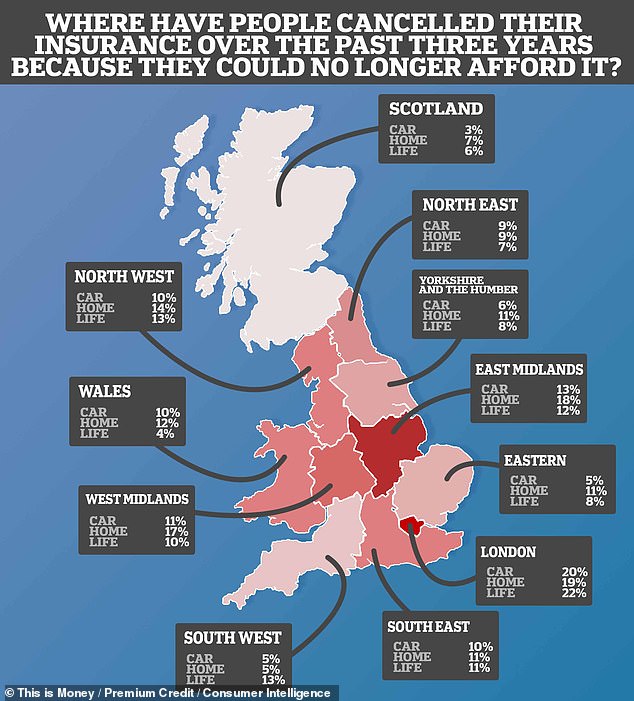 The research also reveals that over the next 12 months, as many as 12 million people are considering cancelling one or more of their insurance policies.

Respondents cited both a rise in the cost of insurance and a drop in income as their reason for cancelling.

Premium Credit’s strategy director Adam Morghem said: ‘It is shocking to see so many people missing out on vital, sometimes legally necessary cover due to cost or concerns over payments.

‘This is leaving millions exposed to unnecessary risks and potentially even greater costs further down the line.’

Is insurance getting more expensive?

The survey, which was commissioned by Premium Credit and carried out by research firm Consumer Intelligence, surveyed 1,198 people around the country.

When asked, 40 per cent of respondents who had cancelled said they could no longer afford insurance because premiums have become too expensive, while 21 per cent said they cut back because they suffered a significant drop in income.

However, most forms of insurance are actually getting cheaper for most policyholders.

Car insurance has been dropping. The latest Association of British Insurers Motor Insurance Premium Tracker shows that the price paid for the average comprehensive motor policy now stands at £466, the lowest quarterly figure since the early months of 2017.

When buying car insurance, you can save money by finding the best deals on a price comparison site.

If you’ve not done this before, it could save you hundreds of pounds on a renewal quote.

This is a simple and easy way to compare prices and while results will broadly be the same across most sites, they may slightly differ, so it is worth checking a couple.

Our recommendations of those to try are

Some insurers don’t appear on comparison sites and are worth checking directly. The main two are Direct Line and Aviva.

This isn’t the case in all regions, however. Confused.com found that the South East bucked the national trend in the first three months of the year, climbing by £8, or 1 per cent, compared to last year.

And the research shows a staggering one in five motorists in London has stopped buying car insurance over the past three years.

The Association of British Insurers says that a fall in motor insurance purchase in London could reflect the rise in alternative transport patterns, such as the rise in hiring vehicles, as opposed to owning a car.

It could also be in part a response to London Mayor Sadiq Khan’s introduction of the Ultra Low Emissions Zone, which has pushed up the cost of driving in some parts of the capital.

Motor premiums are expected to continue to drop as government reforms come in, curbing how much critically injured claimants will receive in compensation.

But this isn’t a sure thing. Insurers have already dropped prices in anticipation of the rule changes, and some industry experts worry that if the reforms aren’t as generous as they were expecting, they will have to put prices back up.

Home insurance costs are also dropping. In the first quarter of this year, the average price paid for combined buildings and contents cover was at its lowest for two years, despite an increase in subsidence and escape of water claims.

However, the cost of pet insurance is on the rise, according to Direct Line Pet Insurance – due to an increase in the cost of vet bills pushing up claims costs.

Perhaps the most worrying response to the survey is the 12 per cent of people who cancelled their life insurance over the past three years.

Again, London is especially hard hit, with an unbelievable 22 per cent of Londoners cancelling their life insurance cover since 2016.

Life insurance is often one of the most important financial products a family can buy, as it acts as a backstop against losing a home or being overwhelmed by debt if a breadwinner passes away.

And most life insurance premiums are guaranteed, which means a policy costs the same each month as when it was first taken out. As a policy can last decades, this means those cancelling are not doing so because new policies are getting more expensive.

This could indicate that it may not be the cost of insurance, but the rising cost of living in general contributing to people cancelling their life cover.

Malcolm Tarling, Association of British Insurers spokesman, said: ‘We recognise of course that any trend in falling premiums does not mean that everyone will feel that insurance is affordable to them.

‘Many of those on lower incomes for example, and in higher risk groups, such as young drivers, may find it harder to get affordable insurance.

‘Shopping around of course is always worthwhile, especially as there are a variety of products to help people access affordable insurance.’

Consumer Intelligence also asked the survey 1,198 respondents whether they were planning to stop buying insurance over the next 12 months.

This doesn’t necessarily mean that the overall number of insurance customers in the UK will go down. People’s circumstances change, and there are always new customers in the market looking to either switch from an existing insurer or to take out a new type of cover.

But the research could suggest that those who are financially insecure are increasingly viewing insurance as a cost they could do without.

‘Anyone thinking of cancelling their cover should think long and hard, as it could turn out to be a false economy should the worst happen.

‘Shopping around in very competitive insurance markets can ensure the right cover at the best price, with a variety of policies available to cater for people on a tight budget.’

What happens if you’re caught without insurance?

Lastly, Consumer Intelligence asked the respondents about their current situations.

Some 28 per cent of those who had cancelled their car insurance admitted to still having a car.

This doesn’t necessarily mean they are still driving, but for those who are, driving without insurance can result in six points on your licence and a fixed fine of £300. If the case goes to court, you can face an unlimited fine.

How to get cheaper life insurance

If you cause a collision, the driver on the other end of it will have to claim through the Motor Insurers’ Bureau. This is funded by insurers, and the cost from this passed down to the average driver is estimated at between £15 and £30 each year.

Some 51 per cent who cancelled their home insurance admitted to having a mortgage, despite most lenders requiring mortgage holders to hold a home insurance policy.

This means for example that if their house were to burn down, they would be left with a massive debt without the asset it was originally secured against, leaving them in a financial black hole.

If the lender finds out, there could also be consequences even if nothing goes wrong.

David Hollingworth of mortgage broker London and Country said: ‘If the lender became aware then I expect that they would remind the customer of their obligation  but in theory they could ultimately ask for the mortgage to be repaid if the breach was not rectified.’