A father of triplets has come up with a genius hack for cleaning out baby bottles quickly and efficiently after growing tired with the amount of time he and his wife spent doing the dishes every day.

Aerol Peterson, from Lincoln, Nebraska, was caught on camera by his wife Christy using a power drill with a scrubbing brush attached to it to wash out their children’s baby bottles.

In the clip, the 32-year-old father-of-three can be seen dipping the soapy scrubbing brush into each bottle and turning the drill on so that the bristles spin around inside the plastic, cleaning it out quickly and easily. 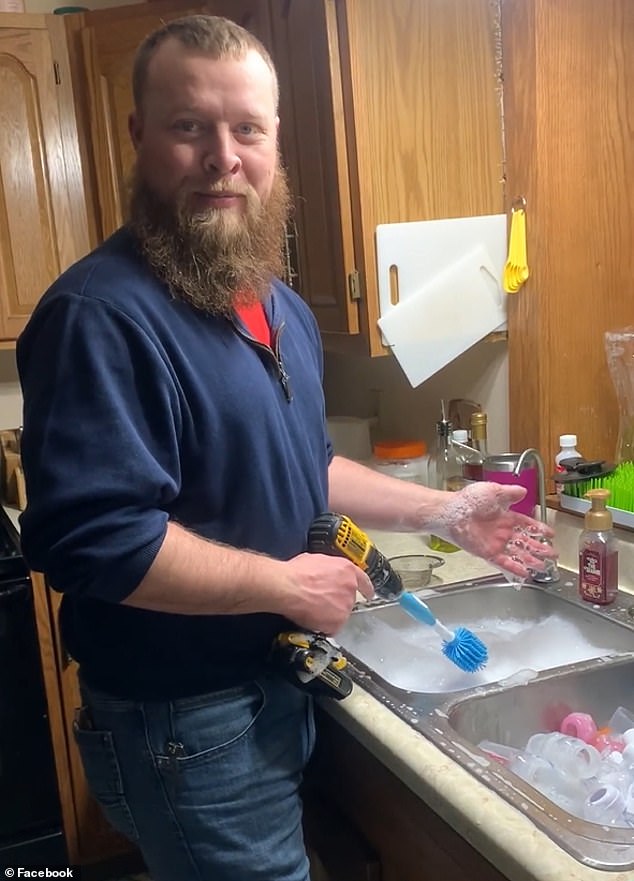 Clever! Father-of-triplets Aerol Peterson came up with a genius hack for washing out his babies’ bottles, using a drill with a scrubbing brush attached to it 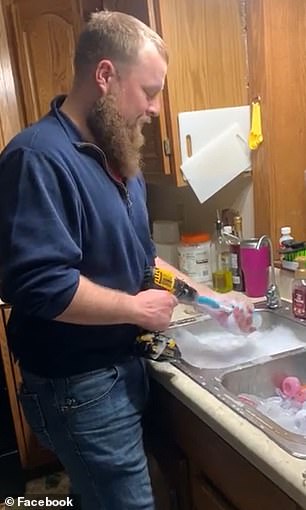 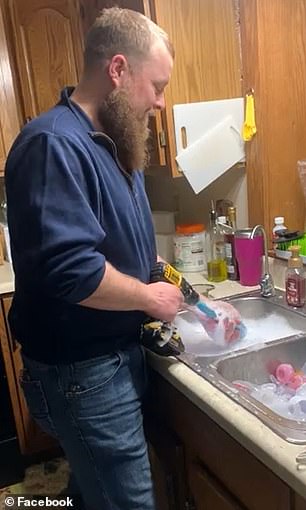 Speedy! The 32-year-old was caught on camera putting his hack to the test by his wife Christy, who then posted the clip to Facebook where it went viral 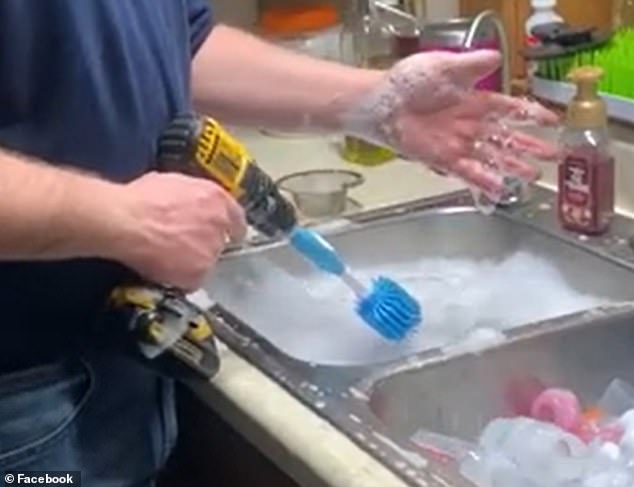 Solution: Aerol revealed that he and his wife use 21 bottles a day to feed all three of their children, and he was growing tired with the amount of time they were spending cleaning them

Posting the video on Facebook, Christy wrote that she ‘came home from grocery shopping to find’ Aerol at the sink washing out their baby bottles in his own unconventional way – with the dad revealing in the clip that his trick ‘works beautifully’.

‘Smarter, not harder, bro,’ he then tells his wife.

The clip, which was originally posted in January but has since gone viral again after being shared across multiple other social media sites, has been viewed by millions since it was first put online – while racking up more than 110,000 comments from impressed viewers.

Many people tagged their friends and urged them to give the trick a go, while others praised Aerol on his creativity.

‘This is so smart!’ one person wrote, while another added: ‘OMG I have to try this out.’

Another person pointed out that the hack can also be put to use with other things, noting that those without children could also use a drill to wash out their glasses and bottles.

My husband and I have wanted to start a blog about our life journey with the triplets for a while. Since this video, many people have asked for us to create a designated Facebook page to be able to keep up with the triplet tribe. Below are our links to Facebook, Instagram, YouTube and our blog. This is just a start to many more adventures to come. Triple Made Simple https://instagram.com/triplemadesimple?r=nametag http://triplemadesimple.wixsite.com/momblog https://www.youtube.com/channel/UC1zI1Vi5jmRC8LtBpvpaRUQ I come home from grocery shopping to this… 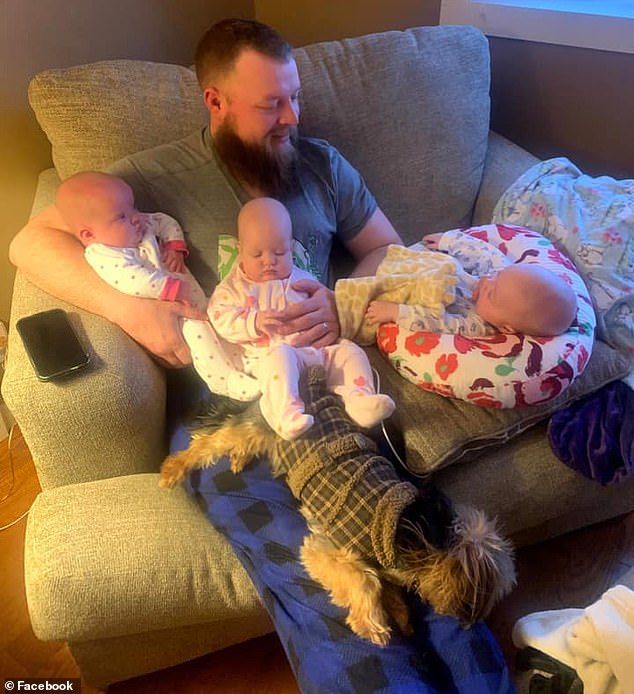 Day by day: The proud dad said that twins run in his family, but it was still a surprise to learn that he and his wife were expecting triplets 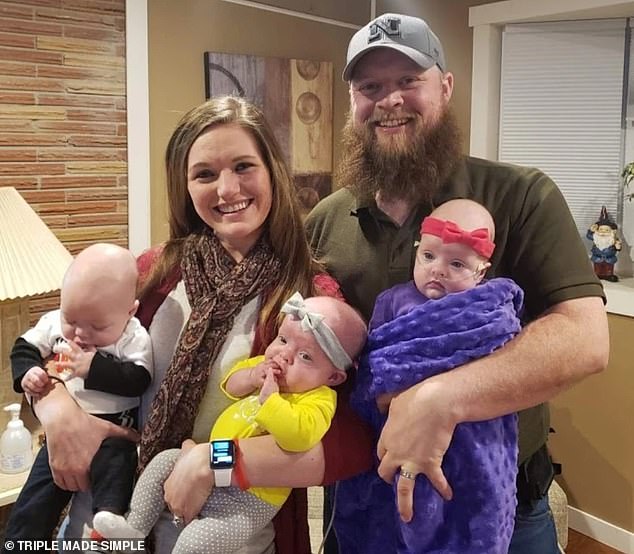 A lot of work: ‘We feed them seven times a day, every three hours, so 21 bottles,’ he explained 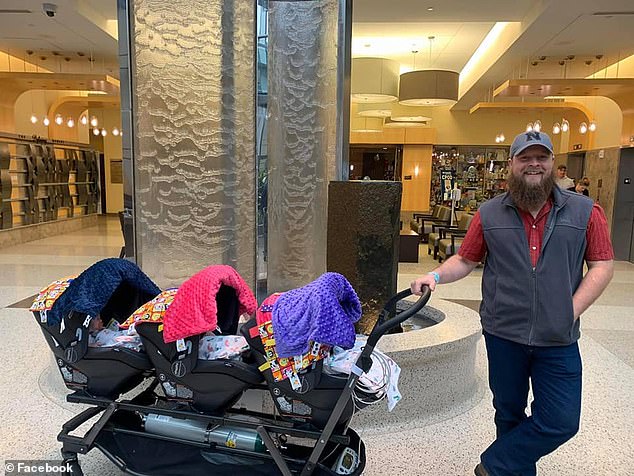 New normal: Aerol said that he and Christy have a great system in place for caring for their triplets, Natashia, Arya and Trae, and that they are handling everything really well

Speaking about the viral interest in his video, Aerol revealed to 1011Now that he had grown tired of the time it was taking to wash out the dozens of bottles that he and Christy were using every day in order to feed their three babies.

‘We feed them seven times a day, every three hours, so 21 bottles,’ he explained.

‘After doing dishes for so long, I got tired of doing one after another by hand, so I thought, “You know what, I wonder if this will fit in the drill.” So I put it in the chuck, and it worked.’

As for his wife, she said that, while she was surprised by her husband’s quirky bottle-washing trick, she wasn’t at all stunned to see that he had tried something out of the ordinary, telling the local news outlet that he ‘does crazy stuff like that all the time’.

‘It’s never a dull moment with him, so when I got home I thought it was very comical. I wanted to record him, something to show the kiddos later just for fun,’ she said.

The couple welcomed their babies, Natashia, Arya and Trae, in June 2019, and Aerol said that, while having three children has resulted in a lot of bottle washing, feeding, and diaper changing, they both grew quickly accustomed to their new normal.

‘We don’t really know any different,’ Aerol, who says that twins run in his family, explained. ‘THis is our normal and we just do it and we do it well.’

Google Maps will show data on coronavirus outbreaks in your region

Charity is 'behind' Google demonetization of 'fake news' sites

Sheffield United will travel to Aston Villa in THREE coaches

Next: Staff working from home ‘miss out on camaraderie’

University self-isolation: PPE to pee and running out of food

People wait to visit a house for sale in Floral Park, Nassau County, New York, the...

Google Maps will show data on coronavirus outbreaks in your region