DAILY MAIL COMMENT: At last, Boris Johnson is on the offensive over Brexit


DAILY MAIL COMMENT: At last, Boris Johnson is on the offensive over Brexit

In a bid to break out of the Partygate morass, Boris Johnson goes on the offensive today.

Writing in the Daily Mail two years after Britain left the EU, he extols the benefits Brexit has delivered and promises an even greater bonfire of red tape.

Significantly, he also throws out a warning to Brussels not to stand in the way of our freedoms, saying: ‘It is impossible to hold back the UK.’

With talks on the vexed Northern Ireland protocol moving at glacial pace, this suggests the PM is ready to take the hard line recommended by former chief negotiator Lord Frost. 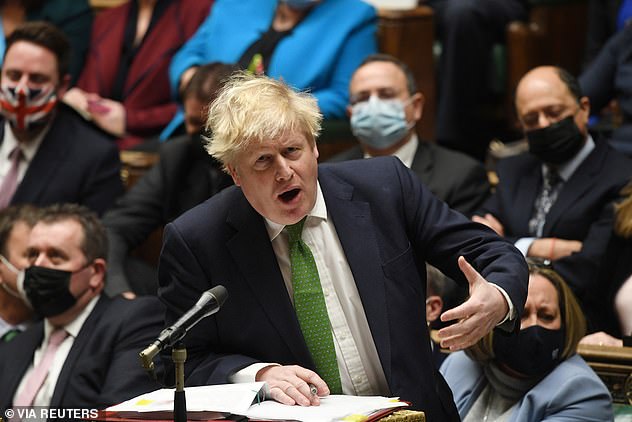 Here was a distinct echo of the confident Boris who bounced into office promising a new era of free trade and prosperity.

He cites a list of advances that couldn’t have happened had we stayed within the EU, from the vaccine miracle to freeports and farming reforms.

And with the new Brexit Freedoms Bill, he pledges to go further and faster. With the help of Michael Gove, he also plans to kick-start the stalled levelling up agenda.

Stirring stuff, to be sure. But fine words butter no parsnips.

If he is to win back their hearts and minds, these pledges must be followed by prompt and radical action.

To hard-pressed families bracing themselves for a perfect economic storm, the promise of tax cuts sometime in the future borders on the insulting.

They need help now. And the most obvious gift Government could have given was to postpone the planned national insurance rise.

How disappointing then, that Mr Johnson and Chancellor Rishi Sunak appear to have rejected this sensible and compassionate move, to the fury of Tory backbenchers.

These MPs know it will bring real hardship to their constituents, coming in combination with soaring energy and food bills, high inflation and a spike in council tax.

Mr Johnson and Mr Sunak claim to be natural ‘tax-cutting Conservatives’ – even Thatcherites. If so, they are hiding it well.

Mrs Thatcher’s great electoral strength was empathy with the struggles of low and middle income families. For her, keeping personal taxation low was not just a policy, it was a mission.

Even in her first budget, when hard fiscal decisions had to be made to save the country from financial ruin, she still slashed income tax rates.

That budget began a remarkable transformation. If Boris wants to achieve a similar national renewal he too must listen to the concerns of the voters.

Failing to lighten their financial burden in the coming crisis would be shamefully tin-eared. And a huge political mistake.

Has Dominic Cummings finally lost all touch with reality?

Like an avenging angel, he says getting rid of Boris Johnson is his ‘duty’ and would be ‘like fixing the drains’.

Despite his democratic landslide of just two years ago, the obsessive Mr Cummings sees toppling the Prime Minister as ‘legitimate’. Fairness doesn’t come into it, he says.

Strangely he only began talking this way after being sacked from Downing Street over his own massive shortcomings.

He has been described as ‘a career psychopath’ and ‘the sort of man who would take nuclear weapons to a pillow fight’. He is also a proven liar.

With all his talk of drain fixing, perhaps it’s Mr Cummings who should crawl back into his sewer.

NBA: Luka Doncic has no limits: he is already top 10 in NBA history… at just 22 years old!