By Charlotte Karp and Charlie Coe For Daily Mail Australia

Daniel Andrews is in intensive care after breaking several ribs and damaging his spine after slipping on wet stairs at home.

But a statement from Mr Andrews that afternoon revealed a series of horrific injuries uncovered by a CT scan. 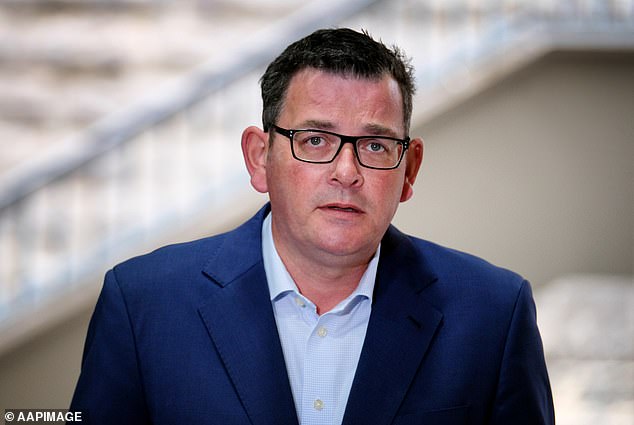 Victorian Premier Daniel Andrews during a press conference in February. He has been taken to hospital after a fall while getting ready in the morning on Tuesday

‘A CT scan has revealed several broke ribs and vertebrae damage, and subsequent medical advice has recommended I remain in intensive care for the next few days,’ Mr Andrews said.

He added that his wife Catherine and their three children Grace, Noah and Joseph were grateful to paramedics who ‘showed such care and kindness to our family this morning’.

The state leader thanked friends and colleagues who sent messages of support throughout the day, and hopes to provide another update later this week.

‘James Merlino will serve as Acting Premier while I recover over the next few days. For now, we’d like to ask that our family’ privacy is respected,’ he said.

Earlier on Tuesday, a spokesman said Mr Andrews was taken to hospital for x-rays as a precautionary measure.

Mr Merlino later said he expected Mr Andrews would soon be ‘back on his feet’. 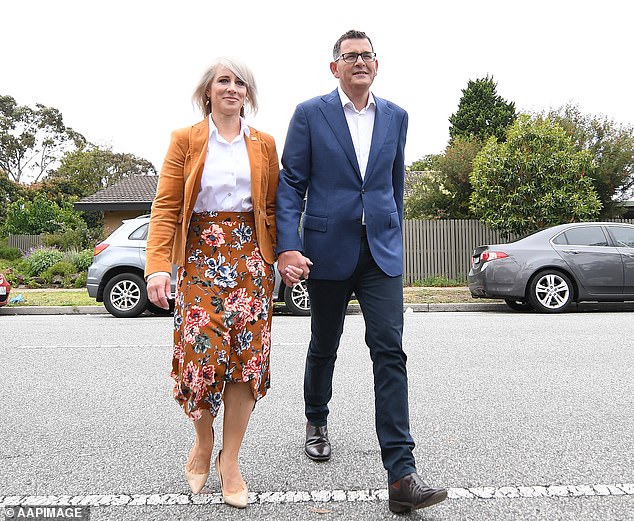 Mr Andrews and his wife Catherine. A spokesman for his office said he has been taken to hospital for x-rays as a precautionary measure

Victorian Liberal leader Michael O’Brien was among the first to wish the premier well on social media.

The hashtag #GetBetterDan also started trending on Twitter throughout the afternoon, as hundreds of Australians used social media to with the Victorian leader a speedy recovery.

‘Falling over whilst getting ready for work doesn’t even register on the medical scale of weird injuries or illness. Hope Dan is ok,’ one user wrote.

‘The sooner you’re okay, the quicker we can all #GetOnTheBeers to celebrate,’ another said, alluding to a song by Australian band Mashed N Kutcher comprising a range of comments made by Mr Andrews during Covid press conferences.

Someone else used the opportunity to share their own mishaps at home.

‘I tripped over my dog late 2019 and needed micro surgery on my hand. This happens to adults all the time. Hope Dan is alright,’ they wrote.

The state Labor government had been scheduled to announce an inquiry into Indigenous disadvantage on Tuesday.

Mr Merlino will take over the premier’s duties on Tuesday for a press conference in Healesville, north-east of Melbourne.

‘I know around the cabinet table and in private discussions how passionate he is about this day and this announcement,’ Mr Merlino said.

Mr Andrews was set to announce the first-of-its-kind inquiry to probe how Western colonisation of Australia continues to affect Victoria’s Indigenous community.

Named the ‘Truth and Justice Commission’, the inquiry could lead to reparations being paid by the government to Victoria’s Aboriginal population.

Greens Senator Lidia Thorpe had praised the announcement as ‘historic’ and called for the commission to represent all 38 Aboriginal nations in the state, The Age reported.

‘When the colonisers invaded, there was a war on these lands – a war that hasn’t ended. But we won’t achieve peace without truth,’ she said.

The commission will report after the November 2022 state election.

A message from the Syrian People’s Assembly to al-Assad

Doctor, 40, reveals the secrets behind his new body after he dropped 10kg in just six weeks

Watch how Trump and his wife Melania celebrate birthdays

National parks have added a mask requirement in accordance with Biden's executive order. Here's where