Victorian Premier Daniel Andrews has denied he or his government are responsible for allowing a man in hotel quarantine to use a nebuliser which allegedly caused a cluster of Covid cases at the Holiday Inn Melbourne Airport.

The father, who used the nebuliser to treat his asthma and is now in ICU with his partner and young daughter also testing positive to Covid, claims he twice told staff he had the device which they allowed him to keep. 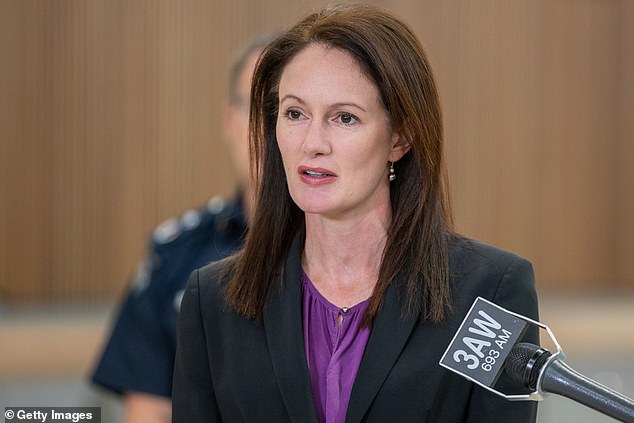 ‘I’ve seen those reports. That’s not consistent with the normal practice that’s followed but I can confirm the head of CQV will be out later today… she’ll be able to answer any of those questions,’ Mr Andrews said on Saturday.

Ms Cassar had previously said the man did not report the nebuliser to the hotel and that Mr Andrews himself suggested the man might not have been aware the nebuliser wasn’t allowed.

Speaking on Saturday afternoon Ms Cassar said protocols had been reviewed to make it clearer that these devices are not allowed in hotel quarantine.

‘There is no evidence he has raised this with hour health team or our operational team.’ Ms Cassar said.

‘We don’t check bags but that is not our recollection [that he had permission].’

When asked if she felt like she had been thrown under the bus by Daniel Andrews Ms Cassar said she took responsibility for her agency.

‘This is my agency. I don’t feel like I’ve been thrown under the bus, she said.

‘We have done our audits and reviews I can’t explain the difference in information … this was not anyone’s fault noone did this maliciosuly or deliberately – first time we heard about this was notification from the Alfred Hospital.’

Ms Cassar has restated her agency has not accused the man of anything and said she is deeply sorry for the man’s treatment and the way information regarding the nebuliser surfaced.

Iraq .. Thwarting the smuggling of medical materials in the port of Umm Qasr