Daughter volunteers at care home so she can keep seeing her father, 77, during the pandemic


A loving daughter has got a job in a care home so she can continue seeing her Alzheimer’s suffering father throughout the coronavirus lockdown.

Nina Ambrose, 49, was devastated when lockdown rules meant she couldn’t visit her father Roger, 77, who moved into a care home in Chelmsford, Essex, in January.

So the 49-year-old decided to take a proactive approach by applying to be a volunteer as an activities and events coordinator at her father’s care home.

Since April she has been doing around three shifts a week at the care home, and after each one she gets to visit her father, who has Alzheimer’s disease. 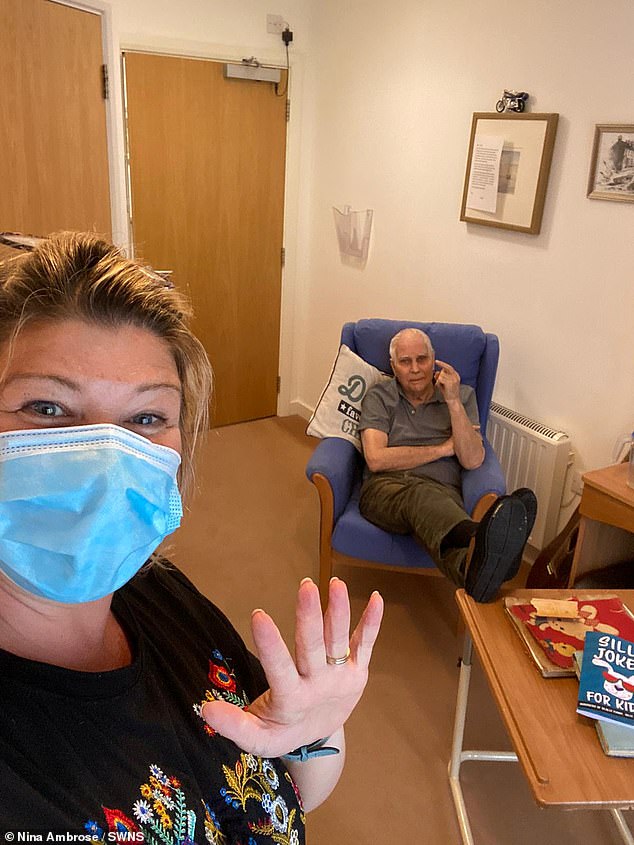 Nina Ambrose, 49, (left) was devastated when lockdown rules meant she couldn’t visit her father Roger, 77, (right) who moved into the Chelmsford care home

The dedicated mother-of-one said: ‘Without this my mental health would absolutely have suffered during lockdown.

‘It’s lovely and rewarding to do, gives me a routine, and I’ve been able to meet residents and staff at a time which has been very isolating for many.

‘Plus I’m seeing that everyone’s dementia story and journey is different.’

Former lorry driver Roger has had Alzheimer’s disease for 12 years, and has declined more severely in the last six months. 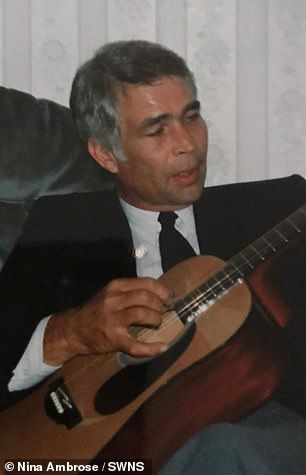 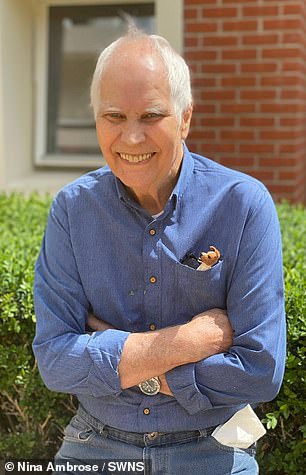 Roger (above) reluctantly moved into Manor Lodge care home in January and Nina went from being able to see him a few times a week, to not at all for five weeks

‘It’s been very hard,’ said Nina from Writtle in Essex.

‘Dad and I have always been very close, we’re like peas in a pod. Dad did a lot of volunteering himself after retiring.’

Caring Nina, a former entertainer, used to work in culture and communications for Benefit, while supporting her dad to remain at home as long as possible.

He reluctantly moved into Manor Lodge care home in January and Nina went from being able to see him a few times a week, to not at all for five weeks.

So she took up a volunteer job in April when she was furloughed from her job in cosmetics, and is still working at the care home. 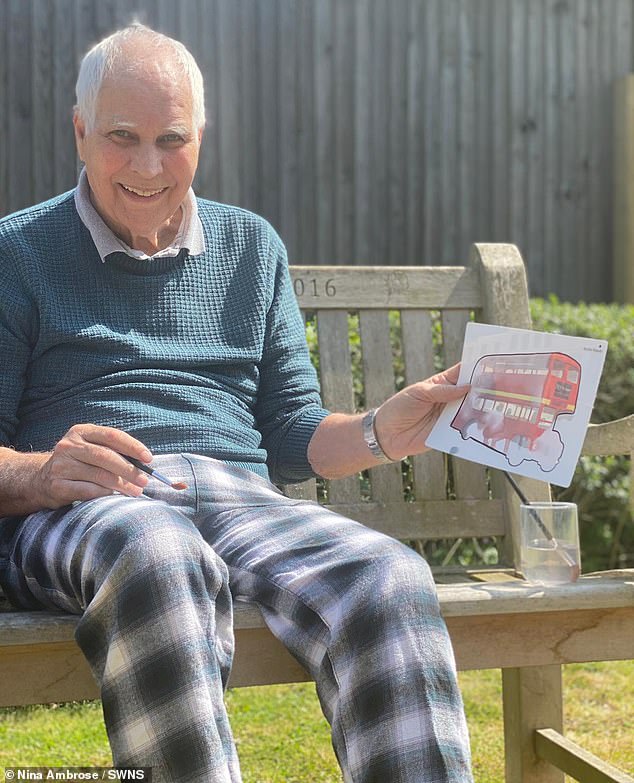 Roger (above)  loves art, so his daughter Nina buys him pictures of cars and buses you can paint by brushing over water, which she is now able to personally deliver when she works

Made redundant three weeks ago, she said her work organising activities and events for the residents has made her consider a new career in caring.

She said: ‘I love it. It makes the residents so happy, when I go in, they start clapping and saying, ‘sing sing’, and they remember all the old songs.

‘Music has such a big impact on people with dementia. It’s been a massive game changer.

‘I wouldn’t have considered doing this job before, but this has absolutely inspired me. 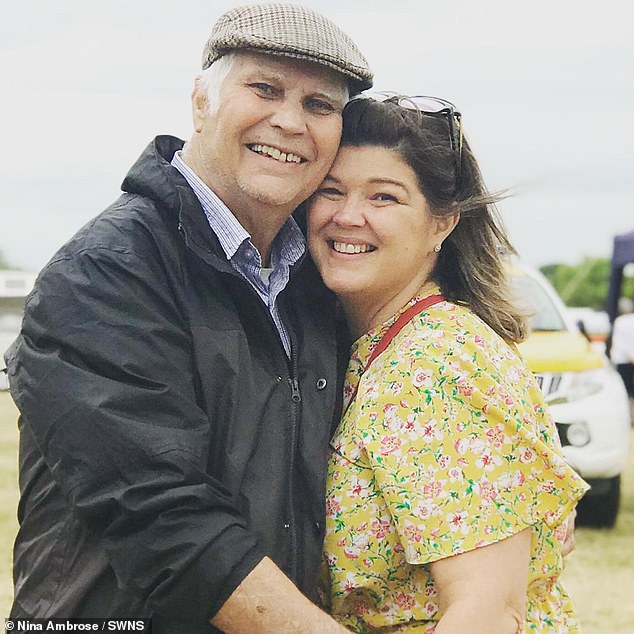 Father and daughter bond: Nina (pictured with her father Roger) said they are like two peas in a pod

‘I feel I’ve got so much to give. I love to make people happy and make them smile.

‘I’d like to spread that joy around as far as I can by working each weekday in five different care homes.’

Roger turned 77 on October 6, and they celebrated with cake and a chorus of happy birthday.

He loves art, so Nina buys him pictures of cars and buses you can paint by brushing over water, which she is now able to personally deliver when she works.

Nina is deeply moved her dad’s story was selected out of 20 for the Empathy Museum, London.

She documents Roger’s journey through illness on her Instagram page @rantsandbigpants to help others in similar situations. 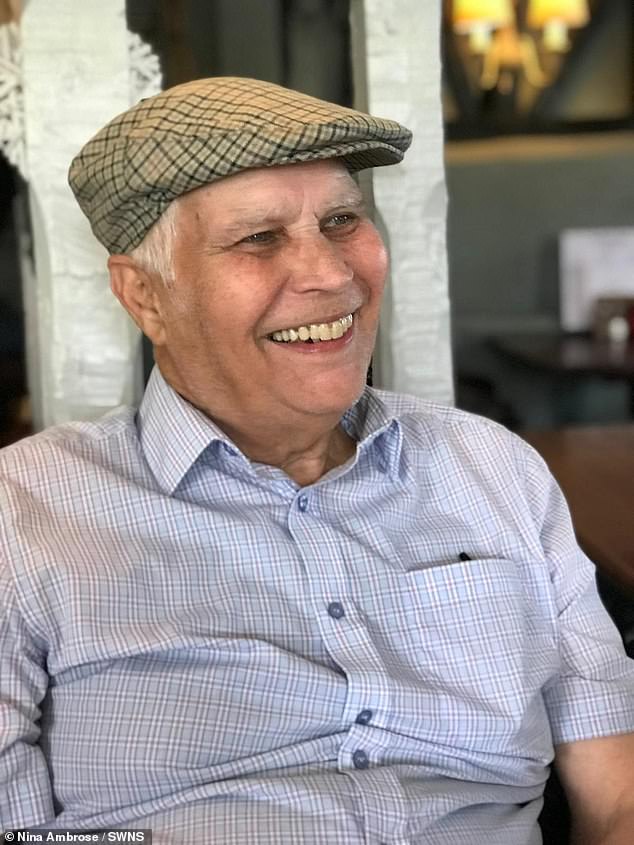 Before he moved into the care home, they used tech to preserve his independence, she described how she installed a camera and remotely guided him through making himself a cup of tea.

She said: ‘Don’t be scared; it doesn’t have to be all doom and gloom.

‘You can tap into what made people happy and the activities they once enjoyed at whatever level they can enjoy them now.

‘I tell Dad the same joke every week and he laughs his head off.

‘People love mine and Dad’s story, they love that we laugh.

‘I had so many fears about what Dad would become but I forewarned myself and these difficult stages are easier for that.’

More than 20,000 care home residents died from Covid-19 during the first wave of the pandemic and official figures show the number of people dying from Covid in English facilities doubled in a fortnight in October.

Ministers have faced ­accusations of prioritising the NHS and ‘throwing care homes to the wolves’.

Experts say the decision to discharge thousands of untested hospital patients into care homes at the peak of the spring crisis was partly to blame.

The first introduction of draconian social-distancing rules left countless numbers of the nation’s most vulnerable isolated for months on end.

As the nation prepared to go into a second lockdown, the Government said on Wednesday that care home visits must take place outside or through a window or screen.

Some of the suggestions include Covid-secure ‘pods’ – made up of floor-to-ceiling screens to prevent touching.

But human right activists have slammed the rules as cruel and discriminatory, especially for people who have autism, learning disabilities or dementia who may rely on touch to communicate.

And they realistically outdoor visits will be out of the question for most as the autumn weather turns, with rain and plummeting temperatures now the norm across the country.

The updated Government advice is that care homes, especially those which have barred visits since March, ‘will be ­encouraged and supported to provide safe visiting opportunities’.

But ‘ad hoc’ in-person visits will not be allowed although homes will still be able to find alternative ways for relatives to meet up with residents.

'Why is he not in that team?' Phil Neville SLAMS Ole Gunnar Solskjaer's decision to drop Paul Pogba

After days of flight delays, cancellations, Southwest Airlines hit with another tech issue