Dave King was less than a year into his chairmanship of Rangers when Mike Ashley sought to have him jailed over Christmas.

The High Court eventually decided there would be no prison turkey for King. Ashley’s move, relating to alleged breach of a gagging order, was thrown out in December 2015. Even so, surely no other incident better exemplified the bitterness of the long-running legal battle between the two men.

That threat is not the kind of thing you easily forget. And with advent calendars open again, it sprang back into King’s mind this week when he reflected on his five years at the Ibrox helm. 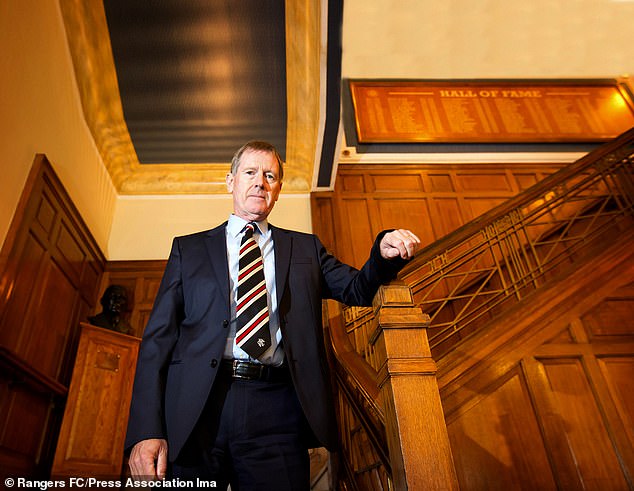 In retrospect, the easy bit was forcing the boardroom coup that deposed Ashley’s allies in March 2015. Trying to subsequently rebuild a broken club required King to invest millions.

Hundreds of hours were diverted from his other business interests — and his family life. All the while, the draining courtroom contest with Sports Direct rumbled on in the background.

The strain, the hassle, the cost and the disappointments on the pitch could all provide reasons for regret. King, though, is clear he has none. Seeing Rangers restored as a force he can recognise has made sure of that.

‘It is completely worth it for me,’ insisted King, who stepped down as chairman in March and has agreed to sell his shareholding to fans’ group Club 1872.

‘As I look back now, some of the difficult times, if I take the dealings with Mike Ashley and the Sports Direct litigation, that was a drain on me in terms of time and effort and dealing with the litigation. 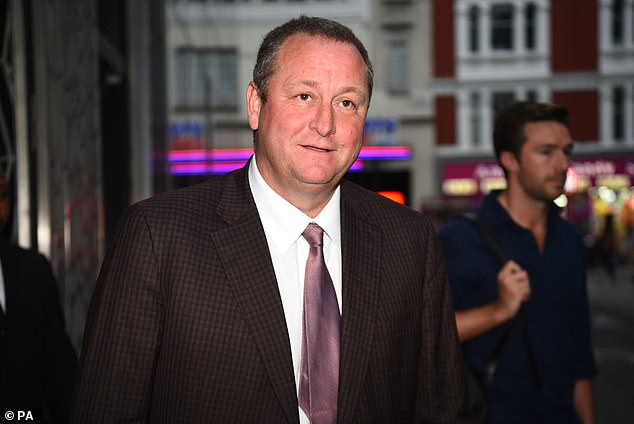 ‘I had to get to London when he was trying to put me in jail at Christmas for contempt of court.

‘There were a lot of emotional difficulties for me and difficulties with the level of responsibility that I took on because the club really was in a mess and had very little executive support in terms of the management structure within the business.

‘A lot of that fell on me. So you had that in addition to the fact that I was making decisions as to what I thought was in the best interest of the club and then had to back that up by finding the money. A lot of times, it had to come from me.

He may no longer be chairman, but King doesn’t view his story with Rangers as having reached a happy ending. Not yet. That will only be possible if and when Steven Gerrard delivers a major trophy to Ibrox. 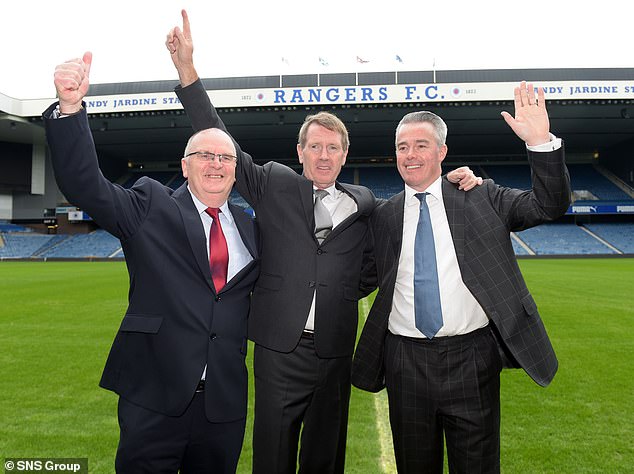 Resident in South Africa, King has had little contact with his former colleagues on the board since stepping back. However, he is clear about his wish to return to Glasgow for any celebrations that might lie ahead. A sense of closure would be found.

‘It would be very important to me to be at Ibrox when we win a league title and I would even go as far as saying to win a trophy,’ said King.

‘The League Cup is a trophy from the club’s point of view. For me, it would still be a culmination of the process I started.

‘The fact I am not sitting on the board right now doesn’t give me the emotional distancing. I feel I am emotionally connected to what is going on and I know the people on the board at the moment, those I worked with, are going forward with the exact same policies and approaches as happened when I was chairman.’

King and former director of football Mark Allen were instrumental in appointing Liverpool legend Gerrard. In May 2018, he followed Stuart McCall, Mark Warburton, Pedro Caixinha and Graeme Murty in taking charge at Rangers under King’s watch. To some, it was an ambitious and exciting move. To others, it felt like a big-name gamble.

Could a 37-year-old who, until then, had only coached Liverpool’s Under 18s really affect the drastic change needed? 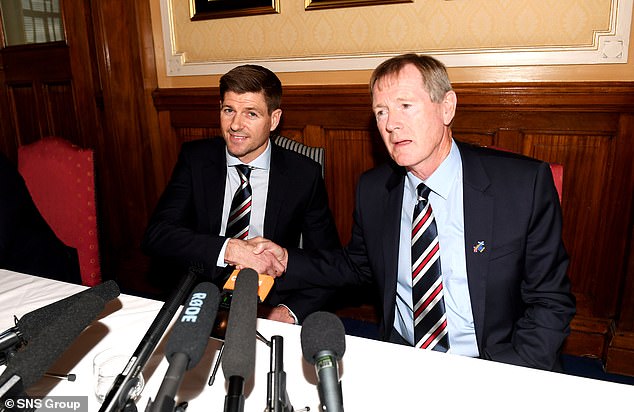 Now, though, it seems Rangers stand on the brink of a breakthrough. Unbeaten in 24 matches across all competitions this term, Gerrard has fashioned an 11-point lead at the Premiership summit, having played two games more than Celtic.

‘I do stay in touch with Steven and congratulate him when certain events happen,’ said King. ‘The decision to appoint Steven, as we all knew, was in a certain sense a bold step — in going for a manager who really had no experience of managing at the top level, just working with juniors.

‘But at that stage, we were looking for someone with character, who we felt had the credibility from a playing-squad point of view.

‘With Steven coming in, we felt that over time it would lead to a better level of player. But he needed time.

‘One of the things he asked of me when taking the job was: “Am I going to get support from the board and access to funding? Then I’ll give it a really good go”. 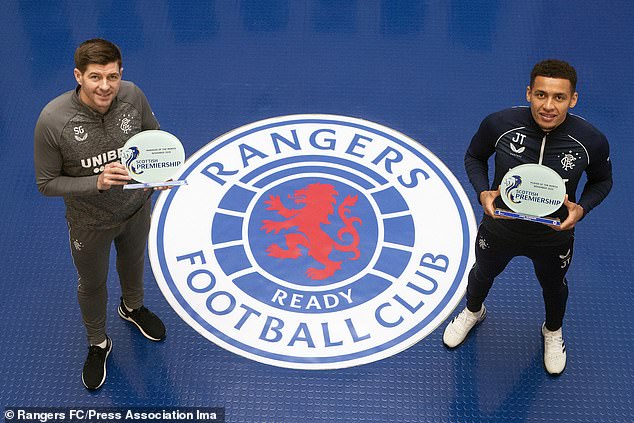 ‘We were very confident in his mentality being right. We knew he would be good with the media because he is very media-savvy.

‘We just felt we had made a couple of missteps in a couple of years and that we had to get it right this time.

‘Obviously, I am very delighted, given the risk in the appointment, that it has worked out as well as it has done.’

Rangers lost £15.9million in the 12 months to June 30, but King retains confidence in the investor base he is leaving behind.

He hopes Club 1872 could also become a future source of funding if they are able to complete a £13.3m deal to buy his stake and become the largest single shareholder.

Clearly, Europe will be central to the next financial steps Rangers take.

The Europa League was worth £21m last season and qualification for this term’s knockout stage will provide a much-needed boost amid the impact of Covid-19. 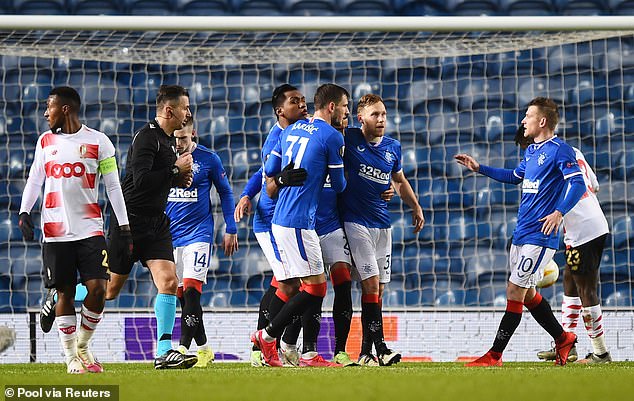 Winning a title and reaching the Champions League group stage would, however, be the real ‘game changer’ in King’s eyes.

‘If I look at it on a year-to-year basis, we are probably about right where we should be,’ he argued.

‘Where I think we have exceeded our expectations are our performances in Europe.

‘We have done this for a couple of years and I didn’t expect the manager to give us this level of success already in Europe.

‘That has been a real bonus to the club in terms of the feelgood factor.

‘And, of course, it is a nice financial bonus in terms of bringing in a level of revenue that is above our expectations over the last couple of years.’

Quibi: Why did the video app go so wrong?

Vonage Holdings shares are down 3.9% YTD. Should I invest?

North Korea test-fires ballistic missiles in message to US

Are George, 60, and Amal Clooney, 43, anticipating child quantity three? Couple are rumoured to be...