David Cameron is accused of lobbying against Boris Johnson


David Cameron is accused of lobbying against Boris Johnson over PM’s move to drop the commitment to spend 0.7% of the UK economy on foreign aid

David Cameron has been accused by allies of Boris Johnson of resuming his lobbying activities – this time against the Prime Minister’s move to drop the commitment to spend 0.7 per cent of the UK’s economy on foreign aid.

Tory rebels, led by former International Development Secretary Andrew Mitchell, are increasingly confident they will win a Commons vote tomorrow to force the Government to abandon the plan to lower the percentage to 0.5 per cent, a drop from £14 billion to £10 billion.

The cut aims to help meet the economic cost wrought by the Covid crisis.

More than 30 Tory MPs, including former Prime Minister Theresa May, have backed the proposed amendment, while another ex-PM, Sir John Major, said he did not believe it was ‘morally defensible’ for the UK to save money at ‘the expense of some of the poorest and most vulnerable people in the world’. David Cameron has been accused by allies of Boris Johnson of resuming his lobbying activities – this time against the Prime Minister’s move to drop the commitment to spend 0.7 per cent of the UK’s economy on foreign aid 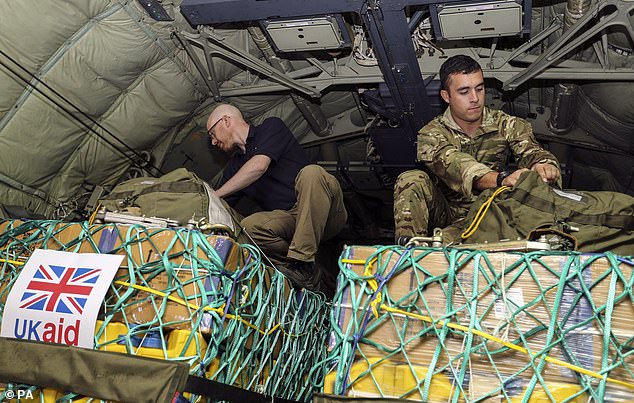 Pictured: Bob Gibbons from the Department for International Development and Cpl Chris Kent doing final checks on the the humanitarian aid bound for Iraq in 2014

Now allies of Mr Johnson claim that Mr Cameron has also been urging MPs to vote against Mr Johnson on the issue.

It comes after Mr Cameron faced weeks of embarrassment over his efforts to lobby for Covid support of the supply chain financing firm Greensill Capital. A source said: ‘You would think Cameron would keep a low profile after that, but we have been told that he has contacted at least one select committee chair urging them to vote to reverse the cut.’

Mr Cameron did not respond to a request for comment last night.

Mr Cameron first made the pledge Conservative policy during his ‘hug a husky’ period – when he was trying to increase the party’s electoral appeal by ‘detoxing’ its image and associating himself with more compassionate and pro-Green policies.

Mr Mitchell said yesterday that he had ‘offered an olive branch’ to the Government by saying that the rebels would accept moves to bring back the 0.7 pledge in a year’s time, after the worst of the economic crisis has passed. 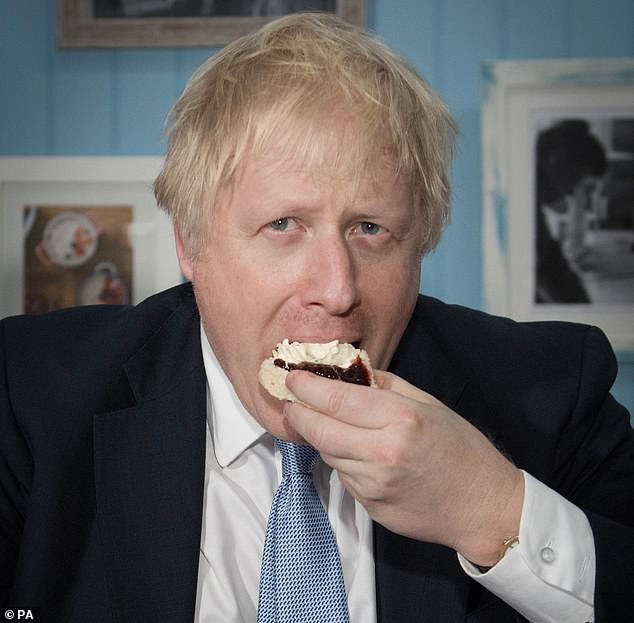 He said: ‘We are cautiously optimistic that we have enough votes. They should accept this offer.’ No 10 points to a recent polls which showed that two-thirds of people back the cut, while only 18 per cent oppose it – but a Commons defeat would be particularly embarrassing for Mr Johnson in the week that foreign leaders land in the UK for the G7 summit.

With Tony Blair and Gordon Brown also voicing their objection to the move, Mr Johnson is facing the opposition of all five living former Prime Ministers.

The Archbishop of Canterbury, Justin Welby, has also opposed the cut, saying: ‘People who are poorest must be dealt with generously. First, for reasons of humanity from one of the richest and most powerful nations on Earth. Second, for our own long-term security.’

In a statement last week, Sir John Major said: ‘Whilst I fully recognise our own budgeting difficulties, I do not believe it is morally defensible to ease our own financial burden at the expense of some of the poorest and most vulnerable people in the world, who have nothing – and nowhere else to turn for help.’.

When Chancellor Rishi Sunak confirmed the plans to cut the budget last November, he said spending 0.7 per cent of GDP on foreign aid was ‘difficult to justify’.

Mr Sunak said: ‘At a time of unprecedented crisis, the House must take tough choices’.

DR ELLIE CANNON: I feel sick when I eat anything sweet... so could it be diabetes?

COVID-19 vaccine concerns for Buffalo Bills as QB Josh Allen sidesteps questions about whether he's had a shot?

Egypt .. A big controversy about the artist, Suad Hosni, 20 years after her death, and her sister decided the matter

Football fans are awaiting the first updates on Sunday morning on Christian Eriksen"s condition following the...