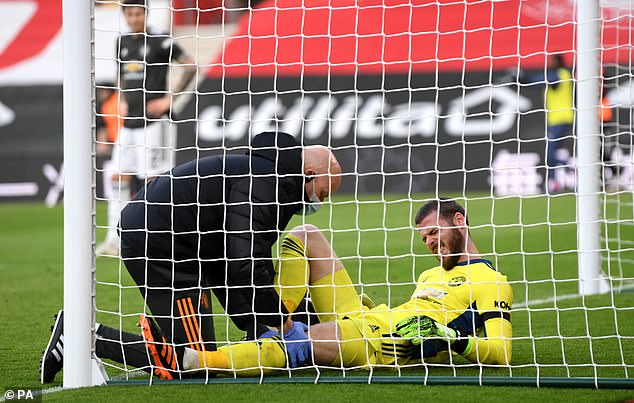 David de Gea will have a scan on his knee on Monday ahead of Manchester United‘s Champions League meeting with Paris Saint-Germain.

The Spanish goalkeeper was forced off at half-time during United’s 3-2 win at Southampton on Sunday after colliding with the post trying in vain to keep out James Ward-Prowse’s free-kick.

Dean Henderson replaced De Gea at the interval, making his Premier League debut for United, and may start the important Champions League clash at Old Trafford if the Spaniard is sidelined.

United manager Ole Gunnar Solskjaer said: ‘[David has] A knock just above the knee, so hopefully he’ll be okay for Wednesday, but we don’t know.

‘Let’s have a little scan or check tomorrow [Monday], but Dean came on and looked very assured.’

United top Champions League group H and will advance to the knockout stages if they avoid defeat against PSG.

They will secure top spot in the group if they win on Wednesday and RB Leipzig fail to win against Istanbul Basaksehir in Turkey, or if United draw and Leipzig lose.

England international Henderson, 23, didn’t go out on a sixth loan spell from United in the summer and instead stayed at Old Trafford to provide competition for De Gea.

But Solskjaer has kept faith with De Gea, starting him in all nine of United’s Premier League fixtures as well as three of their four Champions League group games so far.

Henderson started the Champions League defeat away to Istanbul Basaksehir and United’s two Carabao Cup ties, away to Luton Town and Brighton and Hove Albion.

But Henderson could get if opportunity to impress in the meeting with PSG if De Gea’s knee problem rules him out.