De Bruyne: I have become a role model and Guardiola has a curve of confidence 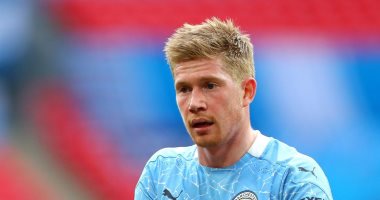 Belgian star Kevin De Bruyne, Manchester City player, confirmed that the Spanish coach, Pep Guardiola, has given him great confidence since taking over the Citizens’ coaching, noting that he believes that he has become an example among the players.

De Bruyne said in statements to the official website of the European Union: “I think that I am an example among the players, especially since I am older now and I am a captain and everyone likes me more than before.”

The Belgian star continued, “I think everyone knows the quality of my passes and what I can do when I have the ball, but when we play a bad game, I think and tell myself I have to run more and keep pressing the opponent.”

“When Guardiola came, he gave me confidence by saying ‘You can be one of the best players in the world,'” De Bruyne added.

“Since then, I feel I’ve progressed as a player, as a person as a captain for this club, and I think now I’m trying to show as fully as I can on and off the pitch.”

And about the injuries he suffers, he said: “You know sometimes you get a little injury, but I know when I get an injury it is mostly because of tiredness from playing a lot of games in a row and the amount of running and the pressure that I do.”

He concluded, “Fatigue and exhaustion happen sometimes, sometimes I have to sacrifice myself and my body to help the team in a bad moment and that is good.”