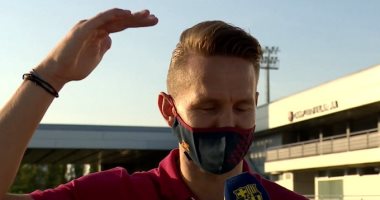 Barcelona striker Luc de Jong passed the medical examinations this morning, Monday, in preparation for the official signing of his transfer contracts to the Catalan team.

The Barcelona team succeeded in including Seville striker Luc de Jong, in the last moments of the summer Mercato, to support the Barca attack.

And, according to the Catalan newspaper, “Sport”, Luke de Jong arrived this morning, Monday, at the Barcelona clinic, and conducted a medical examination before signing the contracts officially and presenting him to the media as a new player in Barca.

He added that Joan Laporta, president of Barcelona, ​​​​and Matteo Alemani, director of the football sector, received a negative rest after the end of the transfer market, and they will return within the next two days, to sign De Jong’s contracts and officially present him to the media.

Barcelona have been linked with a seasoned striker over the course of the transfer market, and tried to sign Edinson Cavani before Manchester United blocked the transfer, then they moved to Joao Felix as part of a swap deal that included Antoine Griezmann, but Atletico Madrid rejected the proposal..

De Jong comes as Barcelona’s choice to replace Antoine Griezmann, who moved to his former club Atletico Madrid on loan, where Ronald Koeman worked with De Jong in the Dutch national team, and the 31-year-old striker is no longer a key player under Seville coach Julen Lopetegui.

It is noteworthy that Luke de Jong is a Dutch-born player, born in 1990, and plays as a strong striker for the Spanish club Seville.

How to get rid of belly fat in 5 ways?