Deaths in assisted living facilities in the U.S. increased by nearly one-fifth amid the COVID-19 pandemic, a ne study suggests.

Researchers led by Brown University looked at data from licensed assisted living facilities with 25 or more beds from 49 states between 2019 and 2020.

In both the overall data and the data only pertaining to the 10 states, the largest large surge of deaths at the end of April and in early May.

The data suggests what many knew, that coronavirus itself, plus deaths indirectly tied to the pandemic, caused a massive swell of deaths among older residents at nursing homes.

The researchers add that the findings give those studying the pandemic their first opportunity to see the true toll the pandemic had on its most vulnerable population at its very start, and can be a foundation for future research. 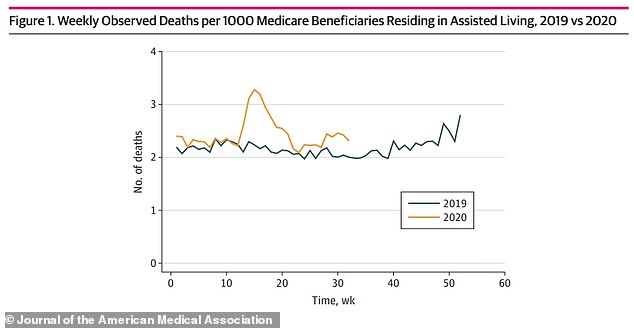 Deaths in assisted living facilities rose by 17 percent in the first half of 2020 when compared to 2019. Pictured: Deaths per 1,000 Medicare beneficiaries living in these facilities by week in both years 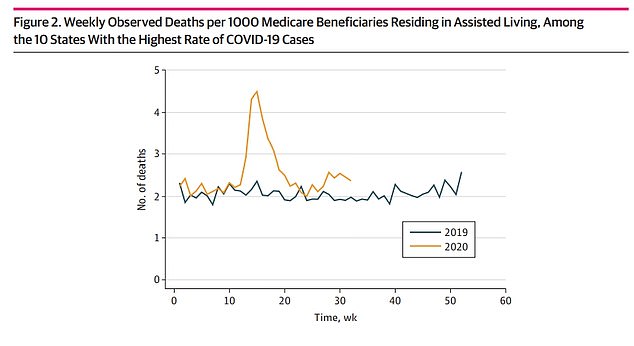 Deaths increased by 24% in the 10 states with the highest COVID-19 rates, especially during the early pandemic surge

Researchers used data from the Centers for Medicare & Medicaid Services to track deaths among Medicare beneficiaries in assisted living facilities in 2019 and through August 2020. 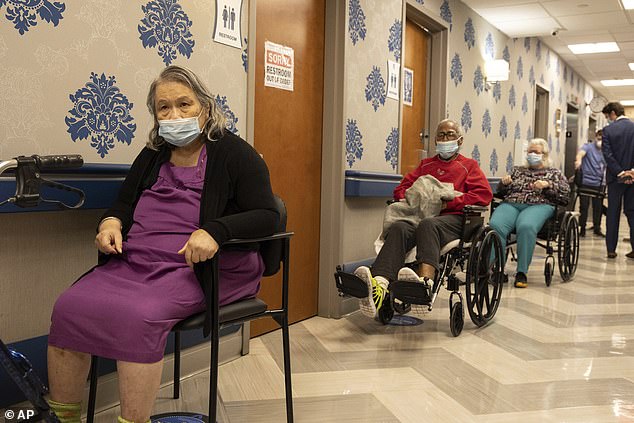 Nursing homes were the hardest struck in the early stages of the pandemic, and new research gives us our first glimpse into the true death toll of the pandemic last year

Minnesota was the only state not included in the study as the state licenses agencies instead of operating physical long term assistance residences, like other states do.

New York City was one of the nation’s early hotbeds for COVID.

It has also since been revealed that nursing home death data was not properly reported in the early stages of the pandemic.

Other states, like Michigan, are also believed to have potentially misreported data on COVID-19 deaths during early surges of the virus.

The study makes up for some of those potential aberrations in data by looking at all-causes of death, but researchers believe that their data could potentially be incomplete as well.

Many believe that counting excess deaths is the true way to find the death toll from the pandemic.

Due to a lack of testing and reporting, especially early on in the pandemic and in some developing nations, not all COVID related deaths are attributed to COVID.

There are also many non-COVID deaths that are indirectly a cause of the virus, such as people dying from diabetes or heart disease after not seeking treatment for a year due to lockdowns.

Some experts believe the true death toll of the pandemic could be up to 8 million, according to excess death data.

The full study will be available in the Journal of the American Medical Association on Monday.