Former attorney-general Christian Porter has been in the spotlight for all the wrong reasons for the past month or so, but 65 years ago it was his father Charles who was one of the most talked about – and admired – people in the country.

When the Tokyo Olympics hopefully get underway later this year, those with long memories will recall the feats of Australia’s Olympic greats going back through the decades.

As names like Dawn Fraser, Betty Cuthbert, Murray Rose, Ian Thorpe, Kieren Perkins and Grant Hackett are rolled out in a steady stream of historic articles and documentaries, it is a fair bet that Charles ‘Chilla’ Porter won’t be mentioned. For a brief period back in 1956 though, he was right up there with the best of them.

Five years ago when I was researching an article on Australia’s forgotten Olympic heroes, I tracked 80-year-old Chilla down at his home in Perth, not knowing what to expect. 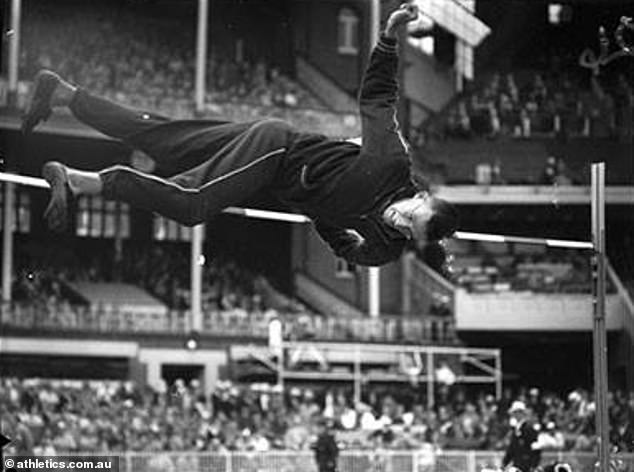 What I found was a charming, humorous gent who was equally proud of his sporting achievements as he was of his son Christian, who had just been re-elected to Federal Parliament for a second term as the member for Pearce.

So keen, in fact, was Chilla to talk about his son’s blossoming political career, that I had to firmly steer the conversation back to the purpose of my visit.

Born and raised in Queensland, Chilla was 20 years old when he arrived in Melbourne to prepare for the 1956 Olympics.

A former student at ‘Churchie’ – Anglican Church Grammar School in East Brisbane – the largest crowd he had experienced until then was at the Greater Public Schools athletics championships a few years earlier.

Australia’s number one-ranked high-jumper, he was a complete unknown in terms of international competition – as he put it, ‘as far as the rest of the world was concerned, I didn’t exist’.

Things weren’t much better in his home country, but that was all about to change. By the time the crowd finally filed out of the Melbourne Cricket Ground on the night of November 23, 1956, just about everyone in Australia knew the name Chilla Porter.

When planning the schedule for the opening day of competition, organisers set aside two sessions for the high jump, with heats in the morning, finals in the afternoon.

The thinking was that the majority of the 28 competitors would fail to clear the qualifying height and bow out in the morning, leaving the 10 or so top jumpers to spend a couple of hours vying for the medals.

It didn’t work out that way.

Of the 28 competitors, 22 qualified for the finals, turning the event into a marathon that had Australia transfixed. 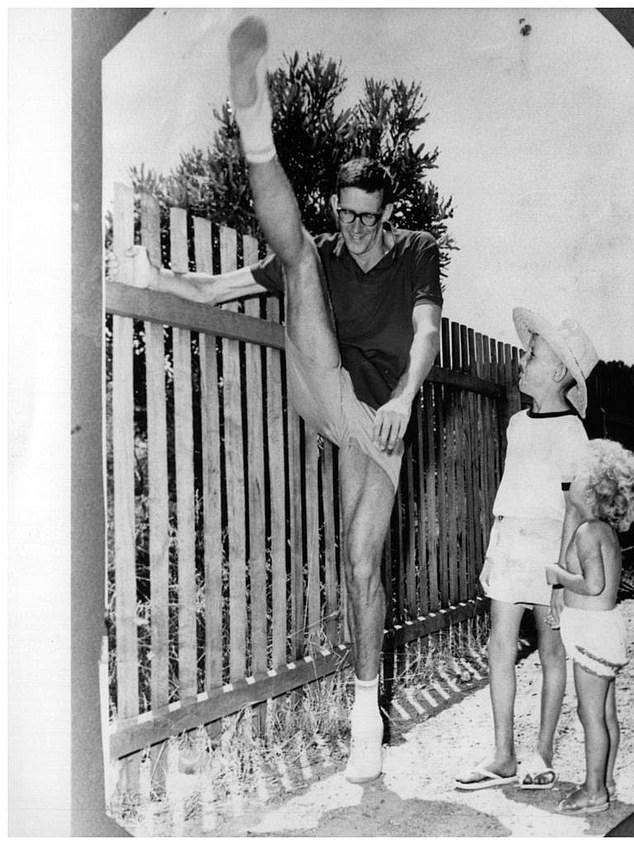 Former Attorney General Christian Porter has been in the spotlight for all the wrong reasons for the past month or so, but 65 years ago it was his father Charles who was one of the most talked about – and admired – people in the country

The favourite for the high-jump was American Charles Dumas, who five months earlier at the US Olympic trials in Los Angeles had become the first person to ever clear 7 foot (2.13m).

So confident was he of winning gold that he chose not to do any training after arriving in Melbourne, preferring to walk onto the practice field each morning, do a few stretches, and return to the athletes’ village. Porter, on the other hand, was training hard and well, and confident of a good performance.

‘The fact that I was under everyone’s radar probably helped me,’ he said.

‘I was under no pressure and I could soak up the atmosphere. I was doing a lot of running and jumping, and I think that’s what helped me to hang on.’ 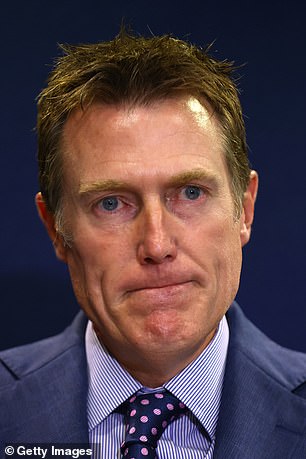 Meredith, his wife of almost 60 years, had her own theory. ‘Just tell him you’re a stubborn bastard,’ she called from another room.

Making it into the finals easily, Porter hung in as little by little the field narrowed. The other events in the afternoon session came and went, as did the sunlight. The competition dragged on into the early evening, but few left the stadium.

It was estimated that when the final jump was taken around 7.30pm, there were still more than 60,000 spectators in their seats.

Thousands more tuned in through the air waves. There were reports of long-haul truck drivers pulling to the side of the highway to listen on their radios as the event reached its conclusion.

If it was gripping in the stands and loungerooms around the country, it was tense down on the field. Media reports the next day said that Porter was ‘cool as a cucumber, reading a book between jumps’.

‘I’ll tell you what the book was,’ he told me. ‘It was a metric conversion table. I was trying to work out what I had to jump.’

And there was certainly nothing cool about the interaction between the competitors as the event developed into a jump-off between the final five: Porter, Dumas, Russian Igor Kashkarov, Sweden’s Stig Pettersson and Canadian Ken Money.

‘At one point Kashkarov walked past where I was sitting, with my little bag at my feet, and he kicked the bag halfway across the oval. I just went and got it and brought it back. I suppose I instinctively knew not to let things get to me. That was how it was in that event. I just seemed to have this laser-beam intensity. 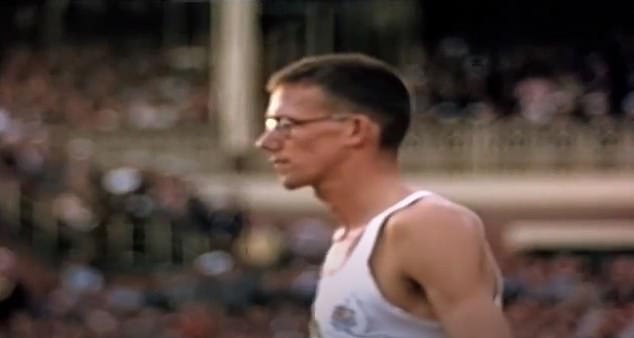 By the time the crowd finally filed out of the Melbourne Cricket Ground on the night of November 23, 1956, just about everyone in Australia knew the name Chilla Porter

‘I remember after I jumped 2.10m to go into the lead, I clasped my hands above my head and started walking back to where my bag was and I didn’t hear a sound until I was three-quarters of the way there. It was like it was completely silent, and then the sound came through and hit me and I realised the crowd were cheering their heads off.’

For a few minutes Porter had one hand on the gold medal, but then Dumas cleared an Olympic record height of 2.12m.

‘He cleared it on his third attempt,’ Porter said. ‘And boy, did that bar bounce.’

As he watched, was he hoping for the bar to drop?

‘No. I was just astounded that after all that time he still had enough energy to make that height.’

When Porter returned to Brisbane with his silver medal it was, in his words, ‘a big deal’. The media reported upcoming events in which he would be competing. 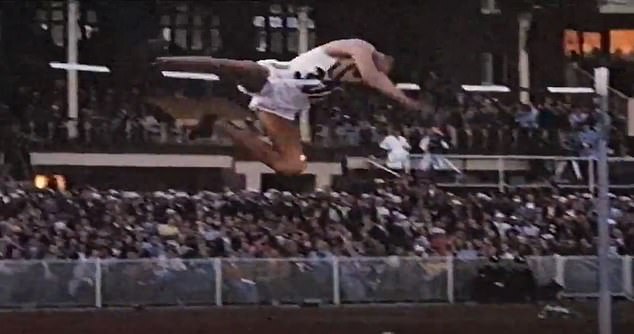 For a while crowds would come to watch but as the years passed, his night of Olympic glory became a rarely remembered footnote to the Melbourne exploits of the ‘big three’, Betty Cuthbert, Dawn Fraser and Murray Rose.

Not that Porter, who moved to Western Australia in 1966 and played a major role in the development of athletics in that state, was concerned.

‘I suppose you’re always a bit of a forgotten event if you don’t win gold. That’s just how it is. People your own age remember you, but I’m nearly 80-and-a-half. It doesn’t bother me. I never really thought about not winning the gold. You go out to do your best, and that’s what I did that day.

‘I was asked once, ‘what was the best moment for you?’ and I said, ‘standing on the dais with your chest bursting with pride having acquitted yourself well for your country’. It doesn’t get better than that.’

Charles ‘Chilla’ Porter died on August 15 last year aged 84. He was remembered by Australian Olympic Committee president John Coates as ‘a great athlete and ambassador’ whose performance in Melbourne in 1956 is ‘etched into Australian Olympic folklore’.

The Zurich students living cheaply in a luxury hotel

The Zurich students living cheaply in a luxury hotel