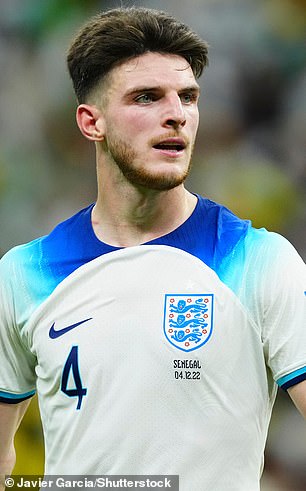 England have suffered a scare in the build-up to their World Cup quarter-final against France on Saturday after key midfielder Declan Rice missed training on Wednesday due to illness.

The midfielder has been crucial to the Three Lions midfield during the campaign in Qatar but was absent from the team’s training session due to an illness.

It is unclear over how this will affect the West Ham midfielder’s availability heading into the last eight clash.

Rice has started all four of England’s matches in Qatar but was the major absentee at the Al Wakrah Sports Complex.

England could also be without Callum Wilson who was absent through a minor strain that he is recovering from.

Wilson has largely been used as a back-up to Kane at the finals and has been a second half substitute in group stage wins over Iran and Wales.

But the rest of the current 22-man squad trained without issue as Gareth Southgate’s side continue their preparation for a meeting with the world champions this weekend.

The England manager is already without forward Raheem Sterling and defender Ben White who have returned home for respective personal reasons.

England’s stars looked to be in high spirits at their training complex as they target reaching back-to-back semi-finals at the World Cup for the first-time ever.

The likes of Harry Kane and Kyle Walker appeared relaxed ahead of what is to be their toughest game of the tournament so far against Didier Deschamps’ men at the Al Bayt Stadium in Al Khor.

There is much hype around the quarter-final with tickets for the encounter selling for more than 28 times face value at around £10,000, with nearly 10,000 English fans looking to attend the match.

England goalkeeper Jordan Pickford has no fear over facing France, insisting his side should be relishing the biggest tests, stating a victory over the reigning champions would be ‘massive’ as they have several ‘top players’.

He added: ‘We know it’s going to be a tough game. But it’s World Cup football. You’ve got to relish these moments. You’ve got to take every chance you get. You might not get another chance to beat France.’

Asia without representation in quarterfinals