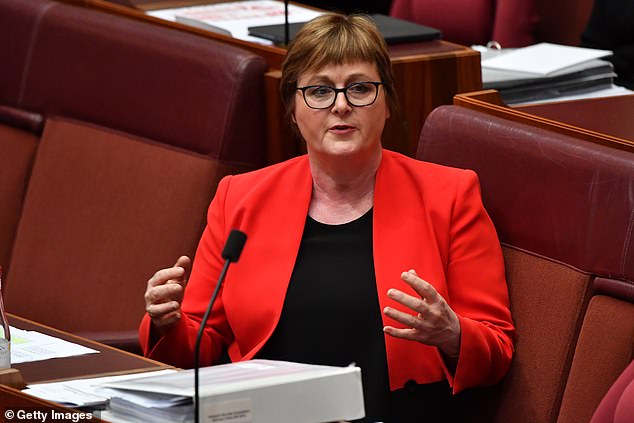 Defence Minister Linda Reynolds has been released from hospital and is expected to take two weeks’ leave in the wake of the Britany Higgins alleged rape scandal.

Ms Higgins, a former adviser for the defence minister, came forward a fortnight ago claiming she was raped by a colleague in Parliament House after a night out in 2019.

Ms Reynolds was then taken to a hospital in Canberra on Wednesday as a ‘precautionary measure’ relating to an existing condition on the advice of her cardiologist.

‘As a precautionary measure, Minister Reynolds has this morning been admitted to a Canberra Hospital,’ a statement said earlier this week.

Ms Reynolds came under scrutiny for her handling of the matter and her treatment of Ms Higgins.

Scott Morrison said he is confident Linda Reynolds will keep her job despite copping criticism over her handling of Brittany Higgins’ rape allegations. Pictured with alleged rape survivor Brittany Higgins

She will return to her office in mid-March.

Ms Reynolds’ release from hospital comes three days after Scott Morrison said he is confident she will keep her job despite copping criticism over her handling of Brittany Higgins’ alleged rape allegations.

Ms Reynolds was taken to a hospital in Canberra on Wednesday morning as a ‘precautionary measure’ relating to an existing condition on the advice of her cardiologist.

Mr Morrison on Thursday quashed any rumours Ms Reynolds’ employment is in jeopardy, saying she is doing a ‘great job’ in her current position.

‘I have great confidence in the work that she’s doing. I thank those colleagues, whether from the government or elsewhere, that have expressed their support for Linda and she certainly has mine,’ he said.

Ms Higgins, who has said she was not supported well enough after her alleged rape, wished Senator Reynolds a speedy recovery

Foreign Minister Marise Payne has taken over Defence duties while Ms Reynolds is on leave.

Mr Morrison’s comments came just hours after Home Affairs Minister Peter Dutton admitted he knew about the alleged rape but chose not to tell the prime minister about it to avoid compromising a potential police investigation.

Ms Higgins spoke to police on February 5, with the AFP then informing Mr Dutton because it was a politically sensitive investigation.

Since Ms Higgins made her allegation public last week, three other women have come forward to accuse the same man of sexual assault or harassment.

The man was sacked after the alleged rape for breaching security rules by entering Ms Reynolds’ office at night.

The allegations have prompted another former intern to share intimate details about her experiences with the man on a couch in the office of a Nationals senator at Parliament House in 2014.

‘The lounge in his office is really comfy, good for doing readings. Haha,’ he wrote.

The former intern shared an exchange of Facebook messages, where the man claims the couch in the senator’s office is ‘really comfy’

Brittany Higgins with partner David Sharaz, who quit his job amid her rape allegations against a former male colleague

Brittany Higgins, then 24, has alleged she was raped by a colleague inside Parliament House in March 2019

Pictured: Prime Minister Scott Morrison during Question Time in the House of Representatives on February 22

Ms Higgins previously said she did not immediately report the alleged rape to police out of fear that she would lose her ‘dream job’, but resigned earlier this month before making the allegations last Monday.

Her alleged rapist has checked himself into a private rehabilitation clinic after losing his job at a large corporation.

Ms Higgins’ claim, which was formally stated to police on Wednesday, opened the floodgates for others to share their stories.

Since Ms Higgins made her allegation public last week, three other women have come forward to accuse the same man of sexual assault or harassment

‘I believe his actions on the night of June 29 and the morning of June 30 constitute sexual assault, because he performed or tried to perform sexual acts on me whilst I was severely intoxicated and unable to provide valid and informed consent,’ she told The Australian.

‘I later realised I was so drunk, I was not able to give any consent’

The second alleged victim claimed she met the ministerial advisor in 2016 when he was working for Ms Reynolds during the election campaign.

Covid-19: Plan to ‘get tills ringing again’ and tests for pupils’ families

Covid-19: Plan to 'get tills ringing again' and tests for pupils' families