With shops reopening as lockdown restrictions are eased, life is returning to our high streets. But it isn’t only pedestrians filling up the footpaths.

Some riders who work for Deliveroo are darting across pavements and putting members of public at risk by weaving in between them. Images reveal riders ignoring red traffic lights.

They come as figures released this month show there were 71 million orders made on the Deliveroo app in the first three months of the year – more than double the figure for the same period last year. 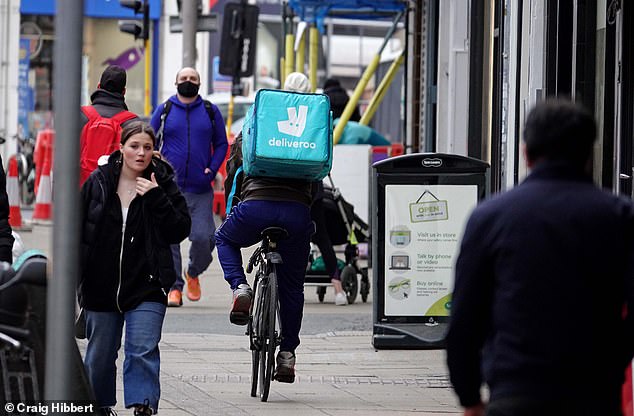 As this photograph shows, some riders who work for Deliveroo are darting across pavements and putting members of public at risk by weaving in between them. Other images reveal riders ignoring red traffic lights

There have previously been complaints about riders causing obstructions by congregating outside restaurants to pick up orders, or for wearing dark clothing at night and failing to have lights on their bikes.

But pedestrians are now taking to social media to air their grievances. ‘Is it some sort of contract stipulation that every Deliveroo rider has to cycle on the pavement?’ asked one Twitter user.

Another tweet claimed the cyclists are forced to cut corners to meet delivery schedules, adding: ‘These riders need a bonus structure that means they aren’t pavement-riding and jumping lights to make a living wage.’

A spokesman for Deliveroo said: ‘We take rider safety extremely seriously and all riders have to abide by the rules of the road as set out in their contract.’