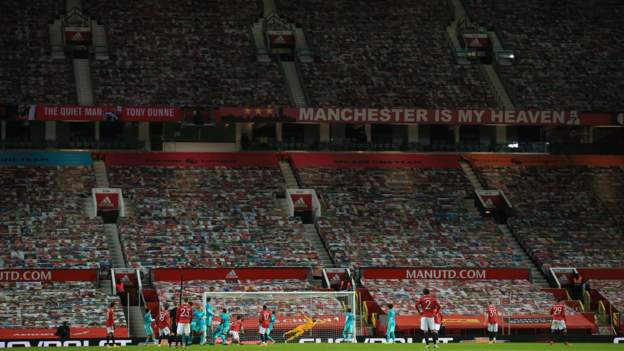 
The coronavirus pandemic will cost Europe’s 20 richest football clubs over £1.7bn by the end of this season.

The Deloitte Football Money League survey found the clubs had already lost around £976m up to the end of the extended 2019-20 season.

Clubs have suffered considerable losses on both broadcast and matchday revenue.

Barcelona generated more money than any other club in Europe, but still had the second-largest revenue fall in absolute terms.

Manchester City, Chelsea, Tottenham Hotspur and Juventus make up the remainder of the top 10.

What caused the income drop?

Coronavirus has caused havoc in the world of sport for much of 2020 and into 2021.

It led to the postponement in March of top divisions in England, Spain, Germany, Russia and France. The French Ligue 1 season was cancelled, while the Bundesliga resumed in mid-May with other leagues following in June – all behind closed doors.

For example, Manchester United said in October that their broadcasting revenue had been reduced 41.9% from £240.2m to £141.2m.

There was also a £228m overall fall for the 20 clubs in matchday revenue, although there was a £93m increase in commercial revenue.

The matchday revenue figure will fall even further for all clubs with fans unlikely to be able to return in significant numbers for any of the 2020-21 season.

“There is no doubt that this is one of the most testing times the football industry has ever had to endure,” said Dan Jones, partner in the Sports Business Group at Deloitte.

“While no football club has been immune to the challenges of Covid-19, and other clubs have suffered more in relative terms, those in the Money League have borne the greatest financial impact in absolute value terms.

“The safe return of fans to stadia in significant numbers is one of the highest priorities across global football. Matchday operations are a cornerstone of a club’s business model and help drive other revenue-generating activity.

“Fans’ absence will be more fully reflected in next year’s Money League. The final size of the financial impact of the pandemic on football will depend, in no small part, on the timing and scale of fans’ return.”

Can the sport recover?

“We remain strong believers in the fundamental value of top-level football to fans, broadcasters and other commercial partners,” insists Jones.

“We are confident in the resilience of the industry and expect it to bounce back strongly in future years.

“The events of the past year have challenged the ability of clubs to drive their own revenue growth. Any short-term ambitions they may have had will likely only be achievable as medium-term goals once fans return to stadia and the effect of the pandemic on the global economy and the path to recovery from it becomes clearer.

“However, the full financial impact of Covid-19 may not be realised for years to come.”