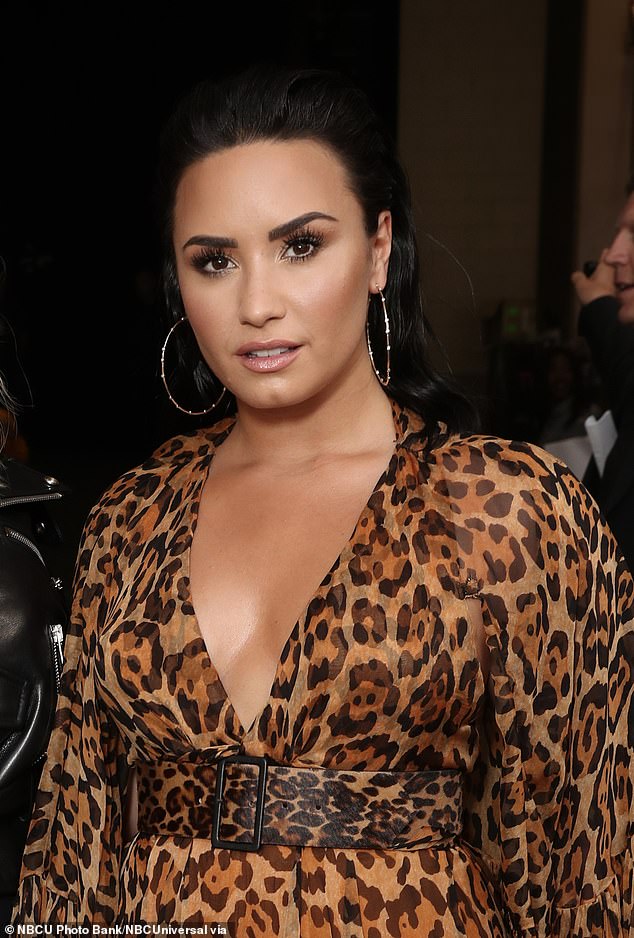 
Demi Lovato has spoken out against the rising trend of gender reveal parties, branding the celebratory gatherings ‘transphobic’.

A nine-page Instagram post, shared by the 28-year-old singer this week, expressed staunch opposition to the soirées – where expectant parents announce the gender of their baby through any variety of items being unveiled in pink or blue.

The lengthy post, which was originally shared online by a trans activist, went on to assert that basing a baby’s gender on their genitalia is ‘inconsistent with science’.

Speaking out: Demi Lovato has spoken out against the rising trend of gender reveal parties, branding the celebratory gatherings. Pictured in 2018

The series of text images, entitled ‘Why Gender Reveals Are Transphobic’, began: ‘It’s both insincere and incorrect to pretend that gender reveal parties are not transphobic. You can’t have your proverbial pink-blue binary cake and eat it too.

‘This is not about political correctness, it’s just…correct. We condemn gender reveals not because of our identity, but because of reality.’

The Albuquerque-born star’s repost went on to state that gender reveal parties lead to the idea that trans people are less ‘natural/organic’ than everybody else.

‘Transphobia is not just about prejudice against individual trans people, it’s also a way of thinking that understands non-trans people as more natural/organic and erases everyone else,’ the post continued.

Post: An Instagram post, shared by the 28-year-old singer this week, expressed staunch opposition to the soirées – where expectant parents announce the gender of their baby

‘These ideas, like the gender binary, fuel mistreatment of all people, but especially trans and gender non-conforming people.’

‘Gender reveals are based on the illusion that genitals = gender and that there are only two options “boy or girl”,’ the post continued.

‘This definition erases the fact that there are boys with vaginas and girls with penises and that there are people who are neither boys nor girls. The idea that sex is based on genitalia is inconsistent with science.’

The post went on: ‘Gender reveals require not just the invalidation of transness, but the impossibility of transness. The assumption is that the baby is cis. Cisness is positioned as the default and everyone else is understood as derivative of it.

‘The idea goes: while we might “identify” as trans now, we were “originally” “born” cis and we later “became” trans. When in truth, everyone is just born. And we all become after the fact.

Text: The nine-page series of text images was entitled ‘Why Gender Reveals Are Transphobic’

‘Even though we might have grown accustomed to other people gendering us, that doesn’t make it right. Only individuals can determine their own gender.

‘Gender reveals uphold the gender binary and the binary prevents people from observing reality. Instead, it offers culturally and historically determined norms (for example: pink used to be considered a masculine color) as personhood.

‘People are taught to experience themselves and one another as ideas of how they should be, not the reality of what they are and what is.

The post concluded: ‘The irony is that trans and gender non-conforming people are accused of advancing a “gender ideology”, when it fact we are trying to escape it.

Views: The lengthy post, which was originally shared online by a trans activist, went on to assert that basing a baby’s gender on their genitalia is ‘inconsistent with science’

‘The real ideology at play here is a system which romaticizes the denial of individuality in the service of maintaining category.’

Crediting the original writer of the words, Demi added the caption: ‘@alokvmenon with the real… Thank you for sharing your knowledge and educating us always.’

The singer recently told how she had ‘three strokes, a heart attack and now has brain damage’ as a result of the terrifying ordeal in a trailer for her new docuseries, Dancing With The Devil.

She recently appeared on The Ellen DeGeneres Show, where she told the host that she thinks sharing her story could inspire others to confront their demons.

‘I talk about a lot [in the docuseries],’ she said.  ‘The world has been so loving and accepting of me telling my story and just, there’s been so much love and support.’

Natural: The Albuquerque-born star’s repost went on to state that gender reveal parties lead to the idea that trans people are less ‘natural/organic’ than everybody else

‘What’s great is we live in a time when nobody’s perfect, and we’re not gonna get role models by watching people not make mistakes.’

‘We are going to meet and learn from our role models who have overcome their deepest darkest struggles,’ she went on. ‘…I wanted to show everyone — first I wanted to set the record straight.’

Last week saw the release of the bombshell trailer for Demi’s new docuseries, in which she shockingly revealed how her overdose gave her ‘three strokes’ and ‘a heart attack’ which left her with ‘brain damage.

My doctors said that I had five to 10 more minutes,’ said Demi stoically during a confessional in the four-part YouTube series.

Appearing to confirm that it was heroin that she overdosed on, her friend says in the clip: ‘She should be dead. Are we talking about heroin? Are we doing that?’

Gender: The post went on to state how gender norms are based on tradition, rather than nature

At one point, an image of Demi’s tattooed hand hooked up to an IV and covered in medical tape, as well as with a hospital band fastened around her wrist, appeared on screen.

As she continued to reflect on the life changing incident and the effect it has continued to have on herself, her friends, and family, Demi compared her resiliency to that of a cat with nine lives.

‘I’ve had a lot of lives, like my cat. You know, I’m on my ninth life,’ she stressed. ‘I’m ready to get back to doing what I love, which is making music.’

While discussing the upcoming YouTube Originals series, Demi elaborated on the lingering effects her overdose has had on her mental and physical health, during a Television Critics Association panel on Wednesday.

Caption: Crediting the original writer of the words, Demi added the caption, ‘@alokvmenon with the real… Thank you for sharing your knowledge and educating us always’

‘I was left with brain damage, and I still deal with the effects of that today. I don’t drive a car because I have blind spots in my vision,’ admitted the Sonny With A Chance actress.

On July 24, just two days before she was set to take the stage in New Jersey, Demi was transported to a Los Angeles area hospital after suffering from an opioid overdose.

The Los Angeles Fire Department confirmed to Rolling Stone that it had ‘responded to a medical emergency call at 11:22 a.m.’ at Lovato’s Hollywood Hills home.

A source revealed to TMZ that when paramedics arrived to Demi’s residence they headed inside where they found the star unconscious.

Paramedics on the scene administered naloxone, which is a medication designed to treat narcotic overdose, before rushing Lovato to a nearby by hospital, as per NBC.

Powerful: Demi’s post comes after her appearance on The Ellen DeGeneres Show, where she told the host that she thinks sharing her story could inspire others to confront their demons

TMZ also reported at the time that Demi had been ‘celebrating a friend’s birthday in West Hollywood’ the night prior to her near-fatal overdose.

Representatives for Lovato issued a statement to Variety on July 25 confirming that Demi had not succumbed to her overdose and that she was surrounded by her closest loved ones, presumably in hospital.

‘Demi is awake and with her family who want to express thanks to everyone for the love, prayers and support,’ it began.

The statement also suggested that ‘some of the information being reported [was] incorrect,’ which was a direct reference to claims suggesting that Demi had overdosed on heroin.

‘They respectfully ask for privacy and not speculation as her health and recovery is the most important thing right now.’

Demi was released from the hospital in August and went on to spend three months in a rehab facility.

A month prior to her overdose, the Disney Channel alum released her emotional ballad Sober, which featured lyrics suggesting she had relapsed.

In March of that year, Demi had celebrated six years of sobriety, following years of admitted alcohol and cocaine abuse.

Dancing With The Devil promises ‘an honest look back at some of the most trying times in Lovato’s life as she unearths her prior traumas and discovers the importance of her physical, emotional, and mental health.’

The documentary is from OBB Pictures, a division of Michael D. Ratner’s OBB Media, who were behind Justin Bieber: Seasons.

In his own statement, Ratner praised Demi’s ‘willingness to explore the darkest elements of her life’ and that her raw honestly will ‘leave the audience with a complete understanding of everything she’s been through and ultimately where she is going.’

‘Demi stands for empowerment, and this documentary is going to answer the many questions that have been out there — providing a real window into the life of one of the biggest stars in the world, who is simply a human being,’ he concluded.

Tough times: Last week saw the release of the bombshell trailer for Demi’s new docuseries, in which she shockingly revealed how her overdose gave her ‘three strokes’ and ‘a heart attack’

How to Defeat The Elder – Valheim Wiki Guide

How to Defeat The Elder - Valheim Wiki Guide