With all 50 Senate Democrats voting Tuesday in favor of starting debate on a revised version of the ‘For the People’ voting rights act, the party showed that it’s shifting on a key issue: voter ID.

Democratic Sen. Joe Manchin, a key swing vote, included a voter ID provision in the compromise he came up with in hopes of attracting some Republican support.

The GOP has long been pro-voter ID, while Democrats have been against, over concerns it could burden poor or urban voters, who’d be less likely to have a driver’s license. 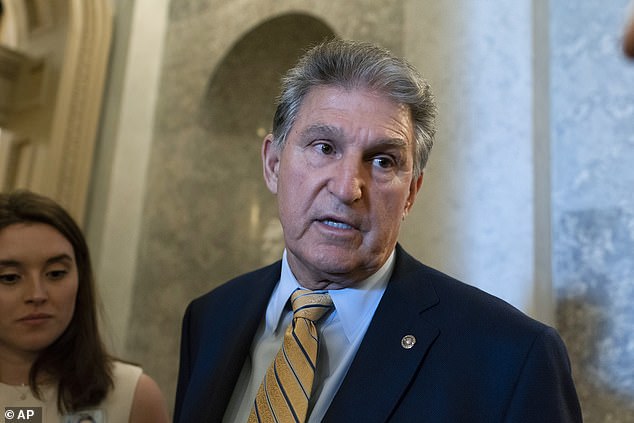 Democratic Sen. Joe Manchin included a voter ID provision in his compromise on voting rights legislation. While Republicans didn’t bite, it shows that Democrats could be open to some sort of voter ID in future legislation 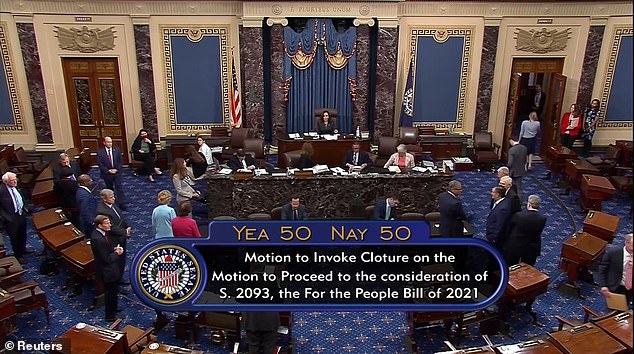 The vote to begin debate on voting rights legislation was split 50-50 between Democrats and Republicans. Sixty votes were needed to break a GOP-led filibuster

Manchin’s enticement didn’t work, with zero Republicans voting in favor of starting debate on the voting rights bill. Ten Republicans needed to defect in order to override the filibuster.

But the Democrats’ concession, that they could support some form of voter ID, potentially opens the door to compromise legislation in the future.

Manchin’s voter ID proposal was less strict than the GOP-supported laws in some states.

The Manchin compromise would require all states to verify a voter’s identification, but various documents could be used, including utility bills.

The Senate bill also allowed voters in states with ID laws to cast a ballot without identification if they signed an affidavit under penalty of perjury.

Democrats have called out Republicans in the past for voter ID provisions that allowed IDs like a gun license – something a GOP-leaning voter might have – but not student IDs – as younger voters lean Democratic – as unfairly targeting Democratic voters.

But public polling on the issue finds that a majority of Americans support voters showing some form of ID.

‘I’m not going to go through different individual pieces of the package,’ she answered when asked Monday about it specifically. ‘It’s a compromise.’

‘The president – there are components out there of course that I think universally among most Democrats in the country – an extension of early voting, making Election Day a law, we would support,’ she continued.

‘This is a step forward. It should be seen as an incremental step forward. We’ll see what’s the next step in Congress,’ Psaki added.

After the test vote failed Tuesday night in the Senate, President Joe Biden sent out a statement vowing to try again.

‘This fight is far from over – far from over. I’ve been engaged in this work my whole career, and we are going to be ramping up our efforts to overcome again – for the people, for our very democracy,’ the president said.