The not-so thin blue line: Descendant of Britain’s 25-stone fattest police officer ‘PC Tubby’ who served in the 1880s and inspired the ‘Laughing Policeman’ song follows in his footsteps by joining the same force

A descendent of Britain’s fattest ever police officer has followed in his footsteps by joining the same force almost 100 years after his ancestor took up the role.

He was a popular figure on the streets of Victorian Leicester, inspiring the hit song ‘The Laughing Policeman’ before he left the force in 1902.

He died in 1908 aged just 48 and despite a huge turnout for his funeral he was buried in an unmarked grave in the city. 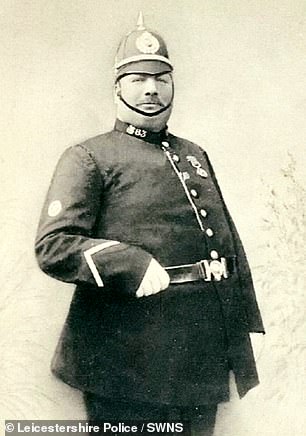 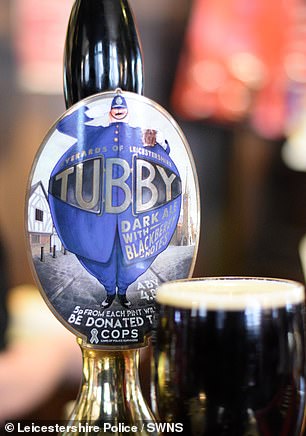 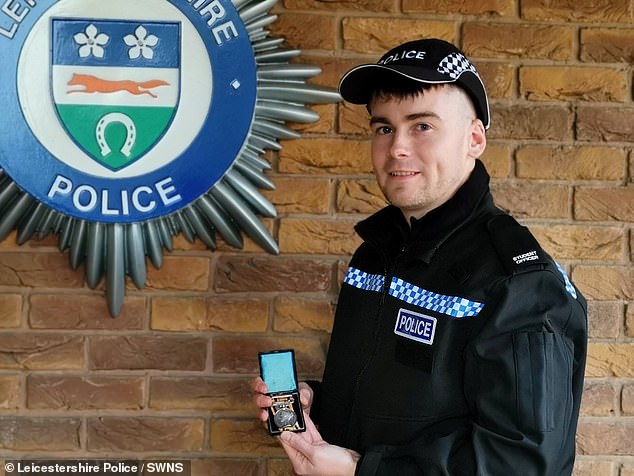 Now his great-great-great grandson Dan Challis (pictured), 22, has joined Leicestershire Police more than a century after his famous super-sized relative

Now his great-great-great grandson Dan Challis has joined Leicestershire Police more than a century after his ancestor.

PC Challis, 22, decided to join the police after spending six years in IT and reading about PC Tubby’s antics.

He said: ‘I was destined for a career change and always had policing in the back of my head as something I wanted to do.

Who was PC ‘Tubby’ Stephens and how did he inspire the Laughing Policeman song?

PC John ‘Tubby’ Stephens was a well-known and well-loved police officer in Leicester in the late 1800s.

Known for his ‘larger-than-life’ jolly persona, he is thought to have inspired Charles Penrose’s Laughing Policeman song, released in 1922.

The song’s lyrics go: ‘I know a fat old policeman, he’s always on our street, a fat and jolly red faced man he really is a treat.

‘He’s too kind for a policeman, he’s never known to frown, and everybody says he’s the happiest man in town.’

PC Stephens was iconic around the city, known to patrol the clock tower.

Prior to that, Tubby enlisted in the army 1877 aged just 20 and in 1879 he was stationed in Zululand in South Africa, where he fought in the Anglo-Zulu war.

He returned to England in 1886 and left the army shortly afterwards to join Leicester Borough Police.

‘When my mum had told me more about our ancestry after applying to the force, I couldn’t believe he was such a well-known face.’

PC Tubby served in the force for 22 years after he returned to England from Cape Verde where he fought the Anglo-Zulu War in 1879.

Dan, who lives in Melton Mowbray, Leicestershire, said: ‘He served as a veteran in the war over-seas and received a campaign medal for his service.

‘The medal has been passed down the family and I was proud to hold it being sworn into duty.

‘He was seen on postcards, in newspapers and people travelling to Leicester to watch the football would seek him out to say they’d met him.

‘I remember when I was younger taking Tubby’s medal to show and tell in primary school, perhaps not realising at the time that he was such a big deal.

‘Never did I think that one day I’d be following in his footsteps and holding that same medal on the day of my attestation.

‘I’m the first in our family since him to join Leicestershire Police so I hope I live up to the bar he’s set, although I don’t want to adopt his size.’

PC Tubby is thought to have inspired the evergreen hit song ‘The Laughing Policeman’.

In honour of his legendary status in the city, his grave was officially marked in 2017.

Local brewery Everards even named one of their beers ‘Tubby’ after the iconic copper.

‘People knew him from far and wide for his community spirit and cheerful personality, undeniably the qualities we see in our officers on the streets today.

‘In 2017, we ensured his grave was marked through funding from the Leicestershire Police Federation (LPF) trust after hearing PC Tubby Stephens had been buried at Welford road cemetery in an unmarked grave.

‘At the time, we were unable to trace his family, so are now thrilled to welcome Dan into policing at Leicestershire and have Tubby’s policing legacy live on.’

Oreo is launching Lady Gaga themed cookies. Here's when you can get them

Oreo is launching Lady Gaga themed cookies. Here's when you can get them