Deschamps before facing Ukraine: I am calm and there is no point in Mbappe staying 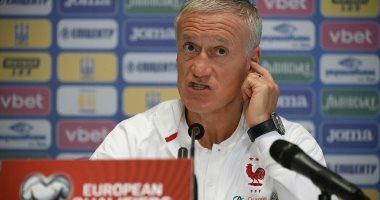 Didier Deschamps, coach of the French national team, confirmed that he does not feel under pressure after the draw with Bosnia and Herzegovina, before facing his Ukrainian host, Saturday evening, in the fifth round of European qualifiers for the 2022 World Cup, noting that Kylian Mbappe was confirmed to be absent from the two matches. Against Ukraine and Finland.

Deschamps responded to a question about whether he feels that the current period is the most difficult for him with the France national team, two days after the disappointing draw with Bosnia and Herzegovina (1-1), in the press conference of the match: “What a question! I do not ask that question to Myself, I am calm and do not think about anything.”

Deschamps added: “I am still on the field, and I still have some experience by contributing to how the qualifiers are handled, even if the final result is not what we had hoped for.”

He continued, “Today we are in the best possible position compared to our opponents, there are still matches to play, including tomorrow’s matches. I am calm and calm and focused on what will happen, starting from tonight and tomorrow.”

On the injury of the star Kylian Mbappe, Deschamps said: “As of the moment, there is no possibility of him being with us on Saturday or Tuesday..

He continued, “Mbappe’s injury has already been exposed to him With his club last May, he almost felt the same, excluding that the injury is strong, he has a muscular problem, but it is not articulated, there is pain.

Deschamps added:I’ll be clear, Mbappe felt some things at the end of the match against Bosnia, we checked him, which was reassuring, as a break in the fibers is unlikely that might leave him out for weeks or a month.

France is at the top of Group D with 8 points, 4 points ahead of tomorrow’s rival Ukraine.

Study: Losing 15 kg of weight is your weapon to recover from diabetes