Deschamps: Ukraine was a stubborn opponent of the French national team and we wanted to win 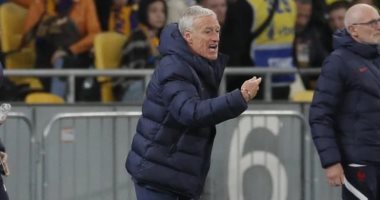 Didier Deschamps, coach of the France national team, confirmed that the confrontation with Ukraine, which just ended in a 1-1 draw, in the World Cup qualifiers, was very difficult, given the match against a stubborn opponent, and he knew very well that he came out with this result in the end.

Deschamps spoke after the end of the match, saying: “We played against a very strong opponent, they played with great physical strength, and we always need more accuracy and movement, we controlled the ball and created chances and we must be able to create more.”

The coach added: “I have confidence in my players, I do not make changes just for the sake of procedure, the situation may not be better than it was before the match.”

The national team had tied with its Hungarian counterpart 1-1 in the second round of the Euro 2020 groups, then tied with Portugal in the same tournament 2-2, and also tied with Switzerland 3-3, before losing on penalties in the round of 16, then tied with Bosnia and Herzegovina and Ukraine 1-1 in the 2022 World Cup qualifiers.

The Ukrainian team excelled with a goal in the first half, scored by Mykola Shabarenko in the 44th minute of the match, from a powerful shot to the left of Hugo Lloris, the French national team goalkeeper.

The match witnessed the absence of Kylian Mbappe, the star of Paris Saint-Germain, from the French national team, who left the team’s camp, after suffering a knee injury against Bosnia and Herzegovina last.

The roosters’ team had fallen into the trap of a 1-1 draw against Bosnia and Herzegovina during the meeting that brought the two teams together last Wednesday night.

Moments protesters pours 'GASOLINE' over NYPD van with cops inside