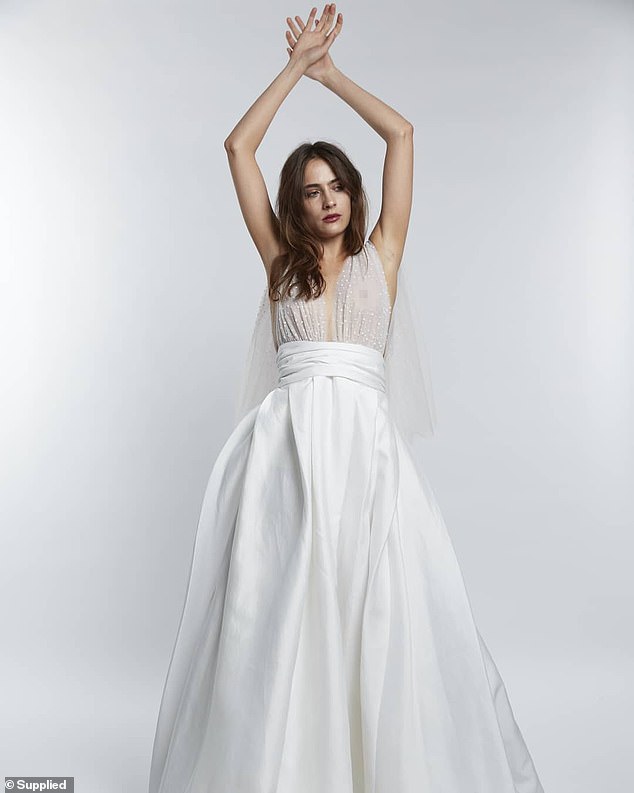 Would-be brides and grooms have expressed their outrage over an ultra-sheer wedding gown because the model’s nipples can be seen through the tulle bodice.

But the proud Australian designer is defending the stunning top and says people should ‘get over’ their fear of women’s nipples.

Bowie Rae is a designer wedding dress brand located in Thirroul near Wollongong, their lead designer Mannie Waugh, is standing by her decision to market the sheer ‘Melody’ bodice without lining.

She told Daily Mail Australia she believes women’s bodies are beautiful – and she won’t let people getting offended by nipples stand in the way of her artistic expression.

‘We’re not scared of a little nipple and we hope that soon enough the world won’t be either,’ Mrs Waugh said.

The bodice, which is paired with a long white skirt in the promotional videos and photographs, is sheer enough to see the model’s nipples – a detail which has left would-be brides and grooms uncomfortable.

The most pressing concern appeared to be over what relatives may think.

‘It is all fun and games until your great grandparents can see your nipples,’ one man said.

‘My grandparents would have a heart attack,’ said another woman.

Another woman slammed the gown as ‘tacky’ over the amount of flesh it exposed.

Speaking with Daily Mail Australia the 36-year-old dress designer revealed she started off her own bridal label after walking down the aisle in a dress she ‘hated’, and realised she had dressed for other people on her big day.

She laughed at comments about the sheerness of the gown, especially ones pointing out what others would think of a bride with her nipples showing.

But the designer, Mannie Waugh, has stepped up to defend the two-piece gown, and her choice to have the model’s nipples on display

She explained women are still expected to ‘morph into brides’ for their wedding day. To turn into a princess, a picture of virginal modesty.

‘Women should feel free to dress how they want on their wedding day, not how they think they are expected to look,’ she said.

She added that she doesn’t expect brides to buy the sheer top without lining, but wants them to be able to choose the style based on what they want.

DO YOU THINK THE BRIDAL GOWN IS INDECENT?

‘We don’t want to tell a bride what she must look like, we want her to tell us what she wants.’

‘We can add lace, a lining, layers of tulle or nipple covers to provide more coverage, but I am not going to cover my model because it offends you to see nipples,’ she said.

‘Some women won’t care about nipple coverage – others love the look but want to make sure there is absolutely no chance of a nipple slip.’

The outraged comments came after the promotional video for the top was shared by bridal gown directory ‘The Dress Tribe’.

People said they were embarrassed by the amount of nipple shown off in the video – and even said their loved ones would ‘have a heart attack’ if they wore it on their big day.

‘Man that’s pretty, but why are her nipples showing?’ one woman asked.

‘A bra is definitely needed,’ said another adding two embarrassed emojis to the conversation.

Mrs Waugh said the bodice can be modified, a fact clearly expressed in the offending video’s caption, and said people ‘don’t bother to read’ before criticising

‘Can’t wait for good old Uncle Randy to be staring at my nipples while at my wedding,’ said another.

‘Love the dress but showing her breasts is just tacky,’ scoffed another.

Mrs Waugh wants people to stop being afraid of seeing women’s nipples – and hates that they are seen as being overtly sexual.

‘People need to learn to relax when they see a nipple,’ she said.

‘The female body is beautiful – and we should also be free to show artistic expression,’ she said.

She doesn’t want women to cringe, like she does, when they look back at the wedding dress they chose for their big day.

‘It should capture who you are in that moment – you want photos to show off who you were when you were married,’ she said.

She said she is proud to be among designers in Australia who are dismantling the capitalist, traditional notion of what a bride should be.

Mrs Waugh, pictured, is the owner and lead designer of the bridal-wear brand – and won’t apologise for showing nipples in her imagery

Mrs Waugh was previously made aware of the huge ant-nipple movement when she posted a ‘beautifully-shot, artistic image’ of one of her veils online.

The model was topless and one of her nipples was showing.

‘Within five minuted the photo was taken off Facebook,’ she said.

Mrs Waugh was told to distance herself from the controversy of the sheer-topped wedding outfit – but she refused.

She said she is proud of the image and believes the conversation is important and should not be avoided.

Many people commented on the video expressing their love for the outfit without slamming the exposed nipples.

Erdogan: We are continuing our measures intensively to rescue the kidnapped crew of our ship by pirates