A TOMATO walks into a bar but leaves red-faced because it doesn’t want to identify as a fruit or a vegetable.

It sounds like a joke but it is in fact the basis of a cartoon circulated by police in a serious attempt to combat discrimination. The minute-long clip, posted online by Devon & Cornwall Police as part of a hate crime awareness campaign, portrays the ordeal of the apparently non-binary tomato as it attempts to enjoy a night in the Salad Bar.

First of all it is laughed at by a broccoli bouncer because it doesn’t have a gender marked on its ID card, with the words fruit and veg repeatedly crossed out.

Inside, it feels unable to choose which toilet to visit as the signs are marked fruit or vegetable, so leaves the bar in despair – only to be greeted by graffiti on a wall outside declaring: ‘Tomatoes ain’t no fruit.’ 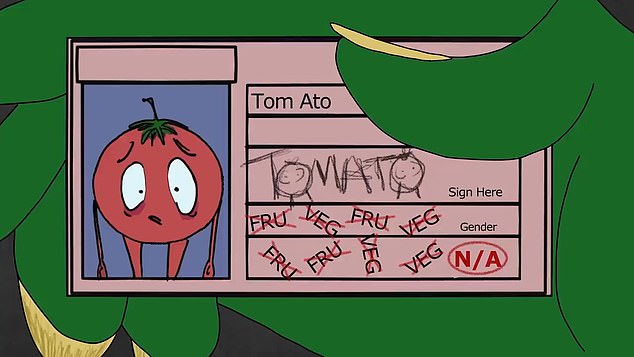 The clip, posted on Twitter by Devon and Cornwall Police as part of a hate crime awareness campaign, portrays the ordeal of a ‘non-binary’ tomato during a night out at the Salad Bar. It is shown being mocked by a broccoli bouncer at the door because there is no fruit or veg ‘gender’ marked on its ID card 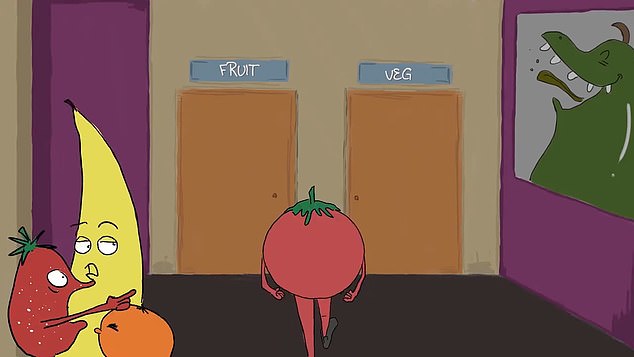 Once inside, it can’t choose between toilets marked ‘Fruit’ and ‘Veg’. Few of those who’ve watched the 80-second video appear to have seen the funny side – with more than 1,400 giving it a pasting

The downhearted tomato then rings police from its mobile phone, however, and is reassured by a blueberry with a rainbow badge on its helmet.

It is told by the policeman: ‘Reporting makes a difference. By reporting hate crime when it happens, you can stop it happening to someone else.

Don’t let other people’s actions dictate who you are.’ The south-west force put the cartoon on Twitter on Monday with the message: ‘Devon & Cornwall Police want to create an inclusive society for all. Let’s celebrate diversity, together.’

But by last night it had mainly brought social users together in ridiculing the video and its misunderstanding of botany as well as what constitutes a hate crime, with more than 1,400 overwhelmingly negative responses.

Former policeman Harry Miller of campaign group Fair Cop told The Mail on Sunday: ‘It is beyond absurd. This is why the British public are losing respect for the police. ‘Police can’t say they don’t have time to attend burglaries yet at the same time be championing the rights of tomatoes.

‘They are serving a woke political agenda at the expense of dealing with actual policing matters.’

Mr Miller – who won a High Court case against Humberside Police after it visited him at work to complain about allegedly transphobic messages online – added: ‘Regular police officers on the ground absolutely hate it, because it erodes all respect for policing and for the law.’

Many of those responding to the social media message questioned what crime had been committed in the video, and whether it would really constitute an offence to declare that tomatoes are not fruit. 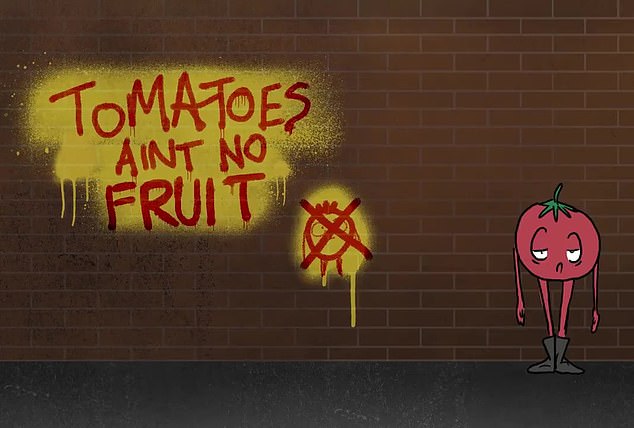 Later in the clip, the tomato sees a lemon spraying graffiti that says: ‘Tomatoes ain’t no fruit.’ Former officer Harry Miller, of the campaign group Fair Cop, said: ‘It is beyond absurd. This is why the public are losing respect for the police’

But the force replied to one Twitter user: ‘Graffiti is an offence of criminal damage and, if prosecuted, the offender could face a fine or even imprisonment. You should contact the local council – they can issue fixed penalty notices.

‘A hate crime is any hate incident which constitutes a criminal offence and the victim or any other person believes it to be motivated by prejudice or hate. You’d probably also want to report something like this on 101 as a non-emergency.’

It added: ‘This video is set in a world where the inhabitants are anthropomorphised fruits and vegetables. I think it’s unlikely that you’d see that exact graffiti in real life.’ A spokesman for the force insisted last night that no public money had been spent on the video, which was created by animation students at a local university.

Devon & Cornwall Police said in a statement: ‘Raising awareness of hate crime of all types is critical to supporting the vulnerable and hard to reach parts of our communities which often struggle to engage with the police.

‘The cartoon was created in 2018 by students at Falmouth University who wanted to show some innovation and demonstrate the issues of hate crime in a different way to as wide an audience as possible.

This was at no cost to Devon & Cornwall Police. ‘It was shown to members of the LBGTQ+ community before it was published and received positive feedback in terms of raising awareness of the issues related to gender identity and subsequent hate crime.

‘This is an emotive subject and it has provoked some significant debate on social media. However, the fact the issue has seen more awareness should be viewed positively and supportive to achieving a zero tolerance to hate crime in our communities.’

Over the summer it emerged that Devon & Cornwall Police had questioned a woman over stickers plastered in Torquay that backed JK Rowling in her bitter dispute with transgender activists.

The force spoke to Suzy Ireson at her holiday let over ‘potentially hateful’ stickers, one of which stated: ‘Don’t flush our rights down the toilet. Protect single sex spaces.’

Fortnite’s Latest Patch Makes it Over 60GB Smaller on PC

In September, Disney World scaled back hours at its parks due to the impact of the...